Musings on Sails and Stars

I should probably clean out my office, and would, if I could find the time, but things keep happening in the deep space community and I keep writing about them. I had the program for ISSS 2010 (the Second International Symposium on Solar Sailing) right beside me when I started to write yesterday’s entry, and by the time I got to the part on the conference, the program had disappeared into the wilderness of printouts, notebooks and letters. Thus I missed the fact that Colin McInnes would be in attendance at the sessions, a major addition to the already stellar lineup. McInnes could be said to have written ‘the’ book on solar sailing, a densely packed tome that lays out the principles and speculates on future missions.

Meanwhile, it’s heartening to see how international the solar sail effort has been from the outset, even if all the space agencies have continued to wrestle with their own funding demons. Much good work has gone on at Germany’s DLR, for example, to be reported on in the context of a DLR-ESA roadmap this morning (Tuesday). JAXA is, of course, present in a big way, with performance analyses of the IKAROS sail and discussions of the new technologies, especially in hybrid propulsion, that it represents. Les Johnson will bring the audience up to speed on NASA’s solar sail history and new mission ideas will be represented from each agency. 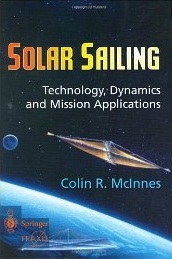 At left is McInnes’ Solar Sailing: Technology, Dynamics and Mission Applications (Springer/Praxis, 1999), an unfortunately expensive but critical addition to the library on deep space propulsion. I love the quote from Voltaire’s Micromegas (1752) that introduces the volume:

Our traveler knew marvelously the laws of gravitation, and all the attractive and repulsive forces. He used them in such a timely way that, once with the help of a ray of sunshine, another time thanks to a co-operative comet, he went from globe to globe, he and his kin, as a bird flutters from branch to branch.

Hearing those lines and thinking of that fluttering bird inevitably brings IKAROS to mind and those first, thrilling images of a solar sail deployment in space. McInnes will be discussing an idea he also kicked around in the book in a session at ISSS 2010, a near-term ‘pole sitter’ mission using solar sail methods (his title in the conference program indicates ‘hybrid propulsion,’ so I’m wondering if he’s thinking, like JAXA, about onboard solar cells).

As long as we’re talking about solar sails, we can dream about future interstellar targets that may one day be visited by hybrid versions of this technology, perhaps using beamed propulsion. A new paper about the incidence of binary and multiple star systems is just out (thanks to Antonio Tavani for the pointer on this). It involves systems in which one member is a star like our Sun. The idea that most systems involving a star of our Sun’s mass are binary or multiple is problematic. It implies a lack of planetary stability that could compromise the possibilities for life. Now Deepak Raghavan (Georgia State) and colleagues are reporting the results of their own survey, one that tunes up and extends these earlier assessments.

Raghavan’s team worked with a sample of 454 stars chosen from the Hipparcos catalog, all like the Sun and within a range of 25 parsecs from Sol. What emerges is that 54 percent (plus or minus 2 percent) of Solar-type stars in our neighborhood are single (the earlier best estimate was 43 percent). The authors believe that earlier studies were off-target because they lacked the more accurate astrometry data available from the Hipparcos catalog, and in the case of a major study in 1991, were beset with parallax errors that skewed the results. In addition, the new research works with a much larger sample (454 vs. 164 Solar-type stars).

If we’ve overestimated the number of Sun-like stars with stellar companions, does this change our outlook on life elsewhere? We’re really asking whether planets are as likely to form and be stable in multiple star systems as they are around single stars. We’re accumulating enough data from the ongoing exoplanet hunt to start to make reasonable projections about at least part of this. Let’s wade into the paper to address the question, which resonates in light of that binary system with a distant companion we’ve got a scant 4.3 light years away from Earth. The first point is to examine this study’s conclusions as compared to earlier work:

Contrary to earlier expectations, recent studies… have shown that planetary systems are quite common among binaries and multiple systems. In a comprehensive search for stellar companions to the then known exoplanet hosts, Raghavan et al. (2009) concluded that even against selection effects, as many as 23% (30 of 131) of the exoplanet systems also had stellar companions. A recent report… showed that 17% (43 of 250) of exoplanet hosts were members of binary or multiple systems. In comparison, 30% (11 of 36) exoplanet systems of this study have stellar companions. This represents the largest percentage of stellar companions in any sample yet of exoplanet systems, likely due to the thoroughness of companion detection in this sample of nearby Sun-like stars. This is however still smaller than the 46% of stars having companions in the overall sample, presumably because all the exoplanets discovered to-date are from surveys that avoid known spectroscopic binaries.

So far, so good. The case for planets in binary or multiple systems is strong, although this will obviously depend upon the specifics of the system in question. A strong case can be made for stable planetary orbits out to 3 AU and perhaps a bit farther around Centauri A and B, for example, but whether or not planetesimals have been able to form around these stars that could produce rocky planets is still an open question, one we’ve discussed here on numerous occasions. But it’s clear that ruling out planets because of multiple star systems is a mistake.

Raghavan and colleagues then put numbers to our expectations in such systems (the italics in the quotation below are mine):

One key question is whether binary and multiple systems are equally likely to form planets as are single stars. Our results show that 9% ± 2% of the single stars have planets, compared to 7% ± 2% of binaries and 3% ± 3% of triples. These fractions are statistically equivalent, suggesting that single stars and stars with companions are equally likely to harbor planets. Moreover, while sufficiently short-period binaries will disrupt protoplanetary disks, hampering planet formation around either star… many binaries in this study have sufficiently long periods to foster planet formation around each stellar component.

I’ve left off some of the internal references for clarity as well as one of the supporting figures, but the conclusion seems robust. It remains for us to learn more about long-term planetary stability in the varying multiple systems we’re uncovering.

We now have three ongoing planet searches of Centauri A and B and may learn in coming months whether the average separation of these stars (about 24 AU) is sufficient to allow rocky planets to form (our earlier discussion of Ji-Wei Xie’s paper on the matter, which argues that a habitable planet is feasible around Centauri B, is here). It will be fascinating to learn how close stars can be to each other to allow planetary systems to form around each, but it’s clear the search for life will take in many multiple star systems as we learn more about planetary lifetimes.

The paper is Raghavan et al., “A Survey of Stellar Families: Multiplicity of Solar-Type Stars,” accepted for publication by The Astrophysical Journal and available as a preprint.