A New View of Ontario Lacus

Before I move into today’s story on Titan, I want to mention that those of us who weren’t able to attend the ongoing Second International Symposium on Solar Sailing (ISSS 2010) can take heart in the fact that selected papers from the proceedings have been quickly published online. Conferences vary tremendously in the resources they make available during and after the event, but the ISSS organizers are obviously intent on wide distribution of these interesting talks. Let’s hope those papers not yet included will find their way online in coming days.

TZF’s Pat Galea has posted a number of photos from day one of the event on Flickr, including this shot of JAXA’s Osamu Mori delivering an early talk on the IKAROS mission. Project leader for IKAROS, this man is a solar sail pioneer. 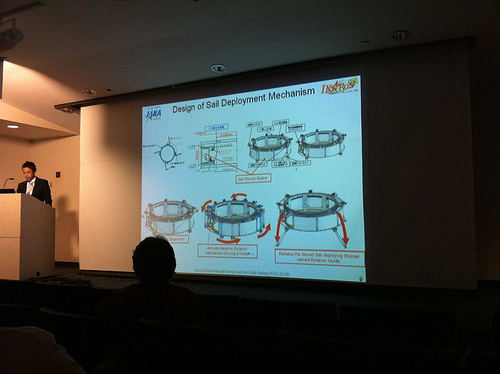 For those of you who’ve asked, the focus of ISSS 2010 is indeed near-term, although several longer-range papers will be presented. With our first operational solar sail only recently launched, this is a time to evaluate where we are and what the next steps will be. The conference is described in the proceedings as being:

A Receding Shoreline on Titan

But on to Titan, where the lake levels of Ontario Lacus have continued to spur interest. Last week we learned that this, the largest lake in Titan’s southern hemisphere, is showing clear signs of liquid methane evaporation. It took an examination of four years of Cassini data to show a 1-meter drop in the lake level per year, evidently the result of seasonal evaporation of liquid methane from the mixture of methane, liquid ethane and propane that fill the lake.

The researchers used data from Cassini’s Synthetic Aperture Radar (SAR), studying the intensity of the radar backscatter to derive information about the composition of surface features. They were also able to tap radar altimetry data collected across part of Ontario Lacus from a December 2008 flyby. Oded Aharonson (Caltech) notes the effectiveness of the instruments and the implications of their findings:

“The combination of SAR and altimetry measurements across the transect gave information about the absorptive properties of the liquid, and argues that the liquids are relatively pure hydrocarbons made up of methane and ethane and not a gunky tar.” 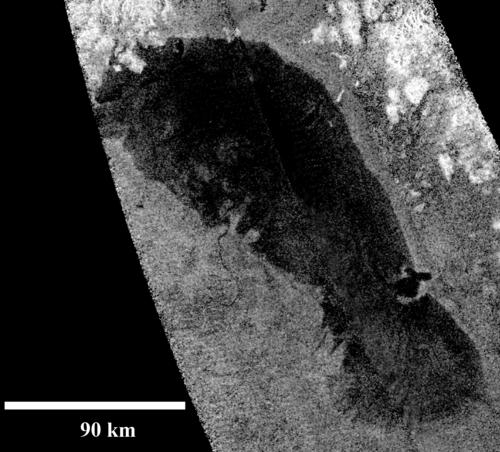 Image: This image of Ontario Lacus, the largest lake on the southern hemisphere of Saturn’s moon Titan, was obtained by NASA’s Cassini spacecraft on Jan. 12, 2010. North is up in this image. Objects appear bright in the radar image when they are tilted toward the spacecraft or have rough surfaces. The lake surface appears dark because it is smooth. The northern shoreline features flooded river valleys and hills as high as 1 kilometer (3,000 feet) in altitude. Credit: NASA/JPL-Caltech.

Cassini’s radar can see through the liquid down to a depth of several meters. The radar will then bounce off the lake floor or, in deeper areas, will be completely absorbed, so that the signature is black. Alexander Hayes, a Caltech graduate student who worked with Aharonson on the project, notes that the lake liquid’s optical properties have been characterized enough to allow the local slope of the lakebed (bathymetry) to be detected. The team was thus able to calculate the slope of the lakebed around the entirety of Ontario Lacus.

The slope turns out to be fairly steep along the lake’s northern boundary as it runs up against a range of mountains, while the lake is at its most shallow and gently sloped along the southern edge, and it is here that sediment is accumulating. Along its eastern shore, the slope of the lake is somewhat steeper. “This is what we are calling the ‘beachhead,'” Hayes says.

The Approach of Autumn

What the researchers have found at Ontario Lacus parallels what Cassini shows about the evaporation of methane from nearby lakes, comparing 2007 data with data from May of 2009. The radar-attenuating liquid decreased or disappeared entirely in these, indicating a reduction of the liquid levels. The same one meter per year loss rate emerges in these results. If you haven’t already seen it, the video tour of Ontario Lacus based on radar data from Cassini’s flybys of Titan is well worth a look.

Cassini’s continued presence in the Saturnian system is paying major dividends. The spacecraft arrived in 2004, when the southern hemisphere of Saturn and its moons was experiencing summer. Now we’re seeing autumn approaching on Titan, a place whose year is the equivalent of about 29 Earth years. As for Ontario Lacus itself, the evaporation now seen from the lake would most likely reverse during winter in the southern hemisphere. It’s breathtaking to consider that we’re dealing with a lake whose surface area (about 15,000 square kilometers) is only slightly smaller than Lake Ontario here on Earth.