The Solar Sail in Context

The final day of the Second International Symposium on Solar Sailing (ISSS 2010) kicks off this morning with Roman Kezerashvili (City University of New York) discussing solar sail missions as a way of testing fundamental physics. Last year in Aosta I listened with fascination as Kezerashvili discussed close solar passes (‘Sundiver’ missions) that could approach as close as 0.05 to 0.1 AU to the Sun, depending on the development of materials technology. The remarkable feature of his talk, though, was the consideration of General Relativity’s effects in such close proximity to the Sun, which could create huge navigation issues.

The ‘Sundiver’ as an Exercise in Physics

Fail to account precisely for spacetime curvature and frame dragging in this environment and such a mission could find itself with a million-kilometer deflection enroute to its target. Even more exotically, time slows in close proximity to the Sun due to relativistic effects, so that the observer on Earth measures about 31 more seconds per year than the observer at 0.01 AU. It will be interesting to see how Kezerashvili follows up his earlier work with colleague Justin Vázquez-Poritz in Physics Letters B on these issues. Today’s talk, based on a paper with Vázquez-Poritz, looks at the Poynting-Robertson effect on solar sail trajectories, and is available in the proceedings.

The effect now partially named after him was first examined by John Henry Poynting in 1904 and later analyzed as an effect of special relativity by Howard Robertson. It has been analyzed in terms of drag on dust grains in the Solar System, which are found to spiral inward as the result of the tangential component of the Sun’s radiation pressure. In solar sail terms, this drag force can influence long-range missions, for the fraction of the Sun’s radiation absorbed by the sail will produce a drag force sufficient to slow the orbital speed of a sail in a solar orbit, and to decrease the cruising velocity and heliocentric distance of a sail on an escape trajectory.

The Poynting-Robertson effect may sound like a small issue, but weigh it against lengthy mission times of the sort we need to contemplate a journey to the heliopause and beyond. A ‘Sundiver’ sail deployed at 0.02 AU would find its cruising velocity decreased by 20 meters per second, a cumulative effect that would decrease its distance from the Sun by more than 20 million kilometers after a 30-year voyage. By exploring these effects, we learn what adjustments to incorporate in future mission planning and are able to examine exotic physical effects in an environment we can produce in no Earth-bound laboratory.

NASA and the Sail 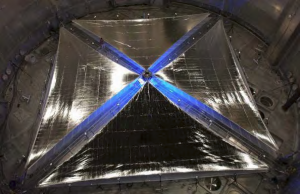 The ISSS 2010 proceedings are stuffed with good material and it will take a while for me to go through all these papers with care. With IKAROS thus far a triumph, where is NASA in current solar sail research? Les Johnson (MSFC) discussed the agency’s progress in the production and testing of two different 20-meter solar sail systems, one developed by ATK Space Systems and the other by L’Garde. Both successfully underwent vacuum testing in NASA Glenn Research Center’s Space Power Facility at Plum Brook Station, Ohio. The ATK sail is shown at left, the L’Garde sail below, as deployed at the Plum Brook Facility (photo credit: NASA GRC). 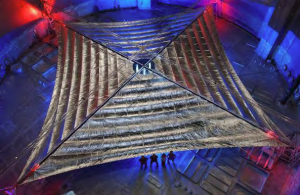 In his paper in the proceedings, Johnson goes through the software tools, computational methods and optical diagnostic system developed in support of these sails, along with their structural analysis and attitude control systems. He also discussed the development of NanoSail-D, a small sailcraft system developed around a CubeSat. You may recall the failure of the Falcon-1 rocket in 2008 that destroyed the first of these sails, but the second is to be flown this fall in a test of sail deployment and deorbiting using atmospheric drag (the ‘D’ in NanoSail-D stands for ‘De-orbit,’ growing out of NASA Ames’ interest in developing a way of using atmospheric drag to deorbit a small satellite).

So we have the NanoSail-D flight spare scheduled for a fall launch, but what is the future direction of the already extensive NASA work on solar sails? The sad fact is that NASA is not currently funding solar sail technology. Les Johnson goes on to report the upside:

However, NASA is now preparing for a dramatic change in focus toward the development of advanced space technology that will enable new human and robotic exploration of the solar system. Solar sails are a technology that can support this aim, and it is likely that within the next few years NASA will again be aggressively advancing the technology toward mission implementation.

Maybe the success of IKAROS will be a spur to the other major space agencies to increase their interest and funding in sail technologies. Let’s hope so.

And what of deep space concepts? Tau Zero practitioner Pat Galea, whose photos from ISSS 2010 are becoming available on Flickr, today looks at the interesting question of whether there is any synergy between sail and fusion concepts for Project Icarus, the ongoing re-thinking of the Project Daedalus starship design of the 1970s. We’re in the early days of Icarus, with major issues of configuration still unresolved, but Galea uses Daedalus as a starting point and looks to establish boundary conditions, assuming Alpha Centauri A as the probe’s destination.

Icarus has the ambitious goal of reaching speeds between ten and twenty percent of lightspeed, and if at all possible, the designers would like to allow deceleration, either slowing the craft enough to increase encounter time at the target or, in the best case, allowing it to enter an orbit around the star. Remember, Icarus (based on Daedalus) may mass a whopping 50,000 kg after fuel depletion. Galea finds that even assuming an ideal sail, deceleration to orbital capture would involve a sail 944 kilometers in diameter. It would be interesting to compare this number with the specs on a magsail, and I imagine the Icarus team will be running those numbers in the future.

A 944-kilometer sail seems out, but sail technologies can be of use in other aspects of this fusion-centric mission. Galea goes on to ponder using gravitational lensing for communications, noting that solar sail missions to 550 AU and beyond are not all that different from concepts already under discussion for interstellar precursor missions. Claudio Maccone’s FOCAL mission stretches the technology but comes up with realistic methods to reach these distances and deploy tethered-antennae lensing equipment. Maccone has also shown the viability of gravitational lensing for communications at interstellar distances. Thus a mission to 550 AU to establish a communications relay to support Icarus remains a possibility.

Another potential use of sails would be the deployment of sub-probes once Icarus passes through the destination system. The original Daedalus design included up to eighteen sub-probes that would investigate planets in the Barnard’s Star system. Deploying sail-based sub-probes would work if Icarus can decelerate (presumably using its fusion engines) into a stellar orbit. Remaining to be considered is whether solar sails could be of value for these sub-probes in a decelerated flyby, which is the more likely scenario given the huge difficulty in decelerating such a large payload to an orbit in the target system. Galea’s conclusions follow:

The likely large mass of the Icarus craft at launch and arrival in the target system, together with the high interstellar speed renders the use of solar sails implausible for useful acceleration or deceleration of the craft as a whole. However, the two aspects of the mission that could usefully use sails are the deployment of sub-probes in the target system, and the deployment of the gravitational lens communications receiver… Both of these types of craft have similar requirements to solar sails that are traditionally discussed for interplanetary missions.

Figuring out the limits on things is how we proceed with developing new technologies. Not long ago I discussed Ralph McNutt’s recent work at JHU/APL on realistic manned missions to the outer planets. The huge price tag had a number of correspondents baffled. How could we justify the outlay of trillions of dollars on a handful of missions to explore these planets? But nobody was arguing that we should. The point of such studies is to develop the baseline, to tell us where we are today and where we will be in the near future in terms of costs and capabilities. By doing such studies, we learn where we need to improve our methods and revise our thinking.

There is a huge gap between the first successfully deployed sail in space (IKAROS) and the deep space concepts that are kicked around in the literature. But it is only by analyzing those concepts and pushing the limits of our current science that we get a realistic view of the goal. Conferences like ISSS 2010 go from present and near-term all the way to remote future uses of technologies we can’t yet build today. They’re necessary, mind-bending exercises in the art of the possible based on the achievements we’ve already produced. And this year, IKAROS gave every solar sail-minded scientist cause for celebration and renewed effort.

Tomorrow: A look at DLR and ESA’s solar sail work.