Japan’s IKAROS sail has thus far conducted a triumphant mission, demonstrating the principles of sail deployment, solar photon propulsion and attitude control in a functioning space sail. While the solar sail community has never received the press attention I believe this innovative propulsion technology deserves, it’s heartening to realize that a long and sustained effort, even one operating under the radar, so to speak, can produce such striking results.

The 2nd International Symposium on Solar Sailing (ISSS 2010) has just wrapped up in Brooklyn, but if you go back to the first of these conferences, conducted in June of 2007 in Ammersee, Germany, you’ll find that the program was laced with representatives of ESA, NASA and JAXA (presentations from that meeting are available online), attacking the issue of getting a solar sail operational from every angle even as the budgets of the representative agencies were being cut back. The needed theoretical work proceeds absent the necessary funding. We can hope the success of IKAROS will pry money loose from NASA and ESA to add to the operational sail experiments JAXA has so notably begun.

The New York Declaration of ISSS 2010 points explicitly to IKAROS in saying:

The international experts, who gathered at the 2nd ISSS, unanimously agree that Solar Sail technology has significantly advanced in its Technology Readiness since the first symposium held in Ammersee, Germany (2007).

It has been confirmed by flight testing in deep space that Solar Sail technology is viable for space flight operations.

Many important applications of solar sails have been identified as useful to the international science community. It is vital that this user community be engaged as soon as possible so that they may better understand the capabilities offered by solar sail technology and to thereby obtain their advocacy.

The main statements and recommendations of the Ammersee Resolution of 2007 are still valid and are confirmed by the experts.

I can’t put my hands on a copy of the Ammersee Resolution but will link to it as soon as I can track it down. What’s ahead in near-term sail development? The declaration notes the continuing evaluation of IKAROS flight data, but also points to a number of sail systems now in the works:

Several of these designs, particularly Lightsail-1 and NanoSail-D, are already familiar to Centauri Dreams readers, but I’ll be posting information on the other missions as they develop.

But back to IKAROS, whose controllers have demonstrated successful attitude control of the sail using ultra-thin LCD panel devices built into the edges of the sail material. By operating the panels independently, the reflectivity of various parts of the craft can be adjusted, with accompanying changes in light pressure on the sail, as is shown in the diagram below (credit: JAXA): 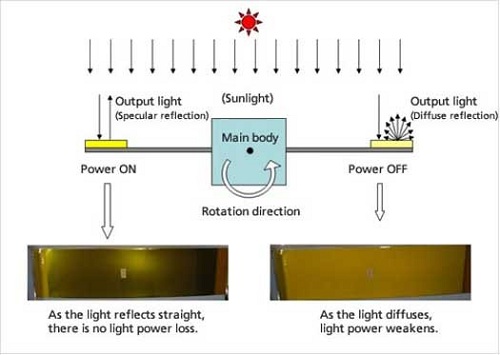 This is handy stuff, because the name of the game for solar sailing is to use little or no propellant, letting the solar photons do the necessary work. The liquid crystal units JAXA has built into IKAROS fill the bill, offering a valuable alternative to the onboard thrusters also available, and pointing the way to future sail designs. Synchronizing the LCD blocks with the spin cycle of the sail allows controllers to fine-tune the sail’s attitude, with results JAXA says have “…achieved the expected control performance of more than 90% of the expected attitude control angle…”

All of this is heartening news and we can hope that continued success for IKAROS will intrigue the public in ways of getting around the solar system that do not involve chemical propellants. We’re at the small demonstrator sail stage right now as we shake out the needed technologies, but much larger operational sails for inner system missions are in our future, and JAXA has already announced ambitious plans to refine the IKAROS concept into a Jupiter mission that will combine sail propulsion with an ion engine. Let’s hope The Planetary Society’s LightSail-1 gets off in not so many months to add a second space-based experiment to our mission catalog.