An individual meteorite can tell us much about the composition of ancient Solar System material, but today I want to mention a project that is taking the aggregate view. Chris Crawford has set up the Perseid Laptop Meteor Observation Project as a way to use ‘crowd-sourcing’ to build up a three-dimensional map of the Perseid meteor stream. Here’s what Chris said about it in a recent email:

This will be one of the better years for Perseids; the Moon, which often interferes with the Perseids, will not be a problem this year. So I’m putting together something that’s never been done before: a spatial analysis of the Perseid meteor stream. We’ve had plenty of temporal analyses, but nobody has ever been able to get data over a wide area — because observations have always been localized to single observers. But what if we had hundreds or thousands of people all over North America and Europe observing Perseids and somebody collected and collated all their observations? This is crowd-sourcing applied to meteor astronomy. 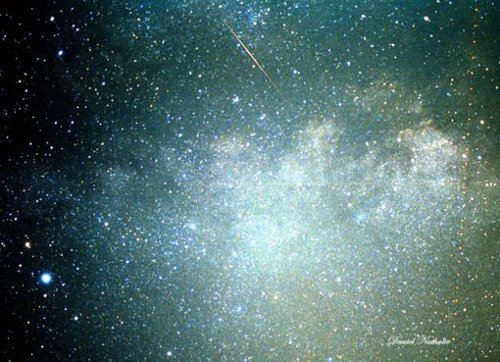 The Perseid program is available at the project site and it’s simple enough to use. On the night of Wednesday-Thursday, August 11-12, you take your laptop outside and launch the program, clicking the mouse every time you see a meteor. The next day, enter your latitude and longitude into the log file and send off the data. Do note this geographical restriction: You must be in the northern hemisphere to see the Perseids; the further north, the better.

As to the Perseids themselves, this meteor shower gets its name because the meteors, from our vantage, seem to emanate from the constellation Perseus. The Perseid cloud follows the orbit of comet Swift-Tuttle, and evidently is made up of cometary material ejected during the comet’s 130-year orbit. The Perseids have quite a history, having been observed for 2000 years, with peak activity reaching 60 meteors or more per hour. Look for the highest rate of activity in the pre-dawn hours. This year, as Chris notes, should offer excellent viewing, and hence a good chance to shake out his software.

Usually I write about celestial debris in the context of the clues it can offer up to astrobiology, or as examples of the need to develop the technologies to fend off larger objects like asteroids. But a fascinating outgrowth of our ever more powerful desktop technologies is the ability to put in just a small amount of time to achieve a widely distributed result, one that looks at a natural phenomenon in a new way. Here’s to the success of the Perseid Project, with the hope that it’s a forerunner of future skywatch collaborations.