When engineer Carl Wiley brought solar sails to a wide audience in 1951, he envisioned a particular kind of sail. Wiley, who wrote under the byline Russell Saunders, published “Clipper Ships of Space” in the May issue of Astounding Science Fiction that year, seven years before the first technical paper on sails, Richard Garwin’s “Solar Sailing: A Practical Method of Propulsion within the Solar System,” appeared in the journal Jet Propulsion. As you can see in the illustration, which ran with the original essay in Astounding, Wiley envisioned the sail as taking a parachute shape, with the payload attached to the sail circumference.

But there are many ways of doing sails. Square or rectangular sail designs (think of those images of IKAROS shot by its detached cameras) have been the focus of recent work, with the result that many alternatives have not reached the same level of technological readiness. But along with parachute sails, spinning disk sails, ‘heliogyro’ designs and a variety of inflated sail concepts are all in the running for future development. Gregory Matloff (New York City College of Technology, CUNY) discussed the ‘hoop’ sail concept at the recent 2nd International Symposium on Solar Sailing, a study available in the proceedings.

A hoop sail is a disc-type sail attached to an inflatable rim, as in the diagram below. A payload could be distributed and hung from the hoop, with the advantage that no cables are necessary (contrast this with the extensive cabling of parachute-like designs), making the sail far easier to deploy. As opposed to other inflatable sail concepts, hoop sails are much less massive because they have only one surface, and present less surface area than other inflatable, hollow-body sails that could be endangered by micrometeorites — remember, the inflated rim is the only part of the sail that would use fill gas.

Hoop sails have made only a scant appearance in the technical literature, but going back through Matloff’s Deep Space Probes (Springer, 2000), I discovered in its 2nd edition that what work has been done has shown that a hoop sail structure is less massive than a square or rectangular boom supporting a sail’s cross members. Matloff quotes Colin McInnes from his 1999 book Solar Sailing (Springer-Praxis, 1999) on the growth of the overall sail concept:

Since Garwin’s paper initiated modern developments in solar sailing some forty years ago, the concept has inspired many individuals to devote their time and energy to advance the field. Countless technical papers have been written which demonstrate the potential advantages of solar sailing, many by graduate students who then move on to the more immediate problems of industry. Studies have been conducted which demonstrate the technical feasibility of solar sailing. However, for all these sometimes heroic efforts, an operational solar sail has yet to fly.

That’s a digression, but I had to include it to revel once again in the fact that the final sentence is no longer true, now that IKAROS is sending back data on sail performance every day. We can now look forward to trying out a variety of sail concepts as the idea is validated.

The Hoop Sail in Deep Space

But back to the hoop sail. Matloff’s continuing work on the concept has included an Oort Cloud Explorer (discussed in the appendix of Deep Space Probes), a sail 681 meters in diameter in which steering and attitude control would be provided by four smaller, five-meter hoop sails. Changing direction and attitude is an interesting issue, and it’s fascinating to consider how JAXA’s IKAROS team is experimenting with LCD units that allow the reflectivity of parts of the sail to be changed to achieve the same effects sought by the small adjunct sails that Matloff describes. 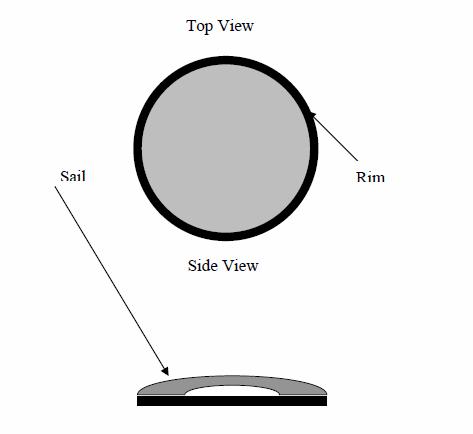 Massaging the numbers for a hoop sail to deep space, Matloff comes up with a ‘sundiver’ trajectory that allows a hoop sail spacecraft to exit the Solar System at about 635 kilometers per second (130 AU per year). This is sufficient to reach the inner fringe of the Oort Cloud in several decades, while a crossing to the Centauri system would involve 2,000 years. That’s about twice the time for an optimized mission with a space-manufactured sail.

Thus the limitation of the hoop sail, in the fact that it has perhaps 50 percent of the performance of the ultimate space-manufactured sails Matloff considers in the same volume. But as his presentation at ISSS 2010 shows, this configuration has undeniable advantages that are worth further study. Matloff goes into sail materials — beryllium seems the best candidate — and he considers a 40 nm beryllium sail to be near optimum. He assumes a rim and sail constructed of the same material, with the rim as an inflated torus with an internal fill gas. The payload is then suspended from the torus in equi-spaced sections so that pressure on the rim is uniform.

One problem, and a huge one, with sundiver missions is the temperatures involved. Assuming a perihelion of 0.07 AU, we can produce the 635 kilometers per second to reach Centauri A in 2000 years, but Matloff notes that in earlier work, 40 nm beryllium is found to become transparent at such temperatures. He juggles increased sail thickness and works with different perihelion distances to lower the sail temperature, finding decreased cruise velocity using such methods, with the Centauri journey extended to roughly 2900 years.

And then there’s this not inconsiderable problem:

Pushed by solar-radiation pressure, the sail membrane within the hoop, like the parachute sail, will in some ways resemble a soap bubble. It is not impossible that micrometeoroid impact punctures could rupture the sail. To prevent this, the sail could push against a network of fine carbon filaments that would serve as a ripstop.

Such a system seems to work and exacts no showstopping mass issues, leaving the hoop sail competitive with other interstellar sail configurations. We’re left with real advantages in scalability and ease of deployment even as the ripstop array increases total spacecraft mass by only a few percent. Thus a sail shaped like the rim of a bicycle wheel with the sail film inside the hoop emerges as an interesting design contender, one that could be used for ultra-thin film sails launched from Earth rather than being manufactured in space.

Matloff presents an interesting early application in Deep Space Probes, a lunar orbital or impact mission using multiple connected hoop sails, the central sail supporting the outer ones, which would be used for guidance and control, with payload suspended from the center of the central hoop. This one is low in mass, and relatively simple to stow and deploy. Such a mission could be a useful demonstrator of the concept, but we have a long way to go if we’re talking deep space. As the author notes in his ISSS 2010 presentation: “The work presented here should be viewed as a very preliminary analysis. Much additional research is required before interstellar hoop sails can be declared feasible.”

The presentation is “The Hoop Solar-Photon Sail and Extrasolar Travel,” available in the proceedings of the 2nd International Symposium on Solar Sailing. It’s interesting, too, to compare this work with a paper Matloff did on a different inflatable sail concept with sail experts Roman Kezerashvili, Claudio Maccone and Les Johnson back in 2008. It’s “The beryllium hollow-body solar sail: exploration of the Sun’s gravitational focus and the inner Oort Cloud” (preprint).