The ways astronomers find to wrest new findings from raw data never ceases to amaze me. This news release from the Max-Planck-Institut für Radioastronomie focuses on a new way to weigh the planets in our Solar System by using signals from pulsars. The method flows out of work on pulsar timing that has been used in the hunt for gravitational waves and has implications not just for the known planets but for detecting hitherto unknown objects in our system.

Pulsar timing supplements earlier ways of weighing planets by measuring their effect on spacecraft flown past them, or extrapolating information from the orbits of their moons. And it seems to be hugely sensitive, to just 0.003 percent of the mass of the Earth and one ten-millionth of Jupiter’s mass.

“This is first time anyone has weighed entire planetary systems – planets with their moons and rings,” says team leader Dr. David Champion (MPIfR). “In addition, we can provide an independent check on previous results, which is great for planetary science.”

So how does this work? The reception of pulsar signals is affected by the Earth’s movement around the Sun, an effect that can be removed by calculating when the pulsar signals would have reached the Solar System’s center of mass, or barycenter, which is the rotation center for all the planets. As you would imagine, the barycenter itself moves as the planetary positions change over time. An ephemeris charting the position of the planets can be used to work out the barycenter’s position according to the values for their masses that have been measured. 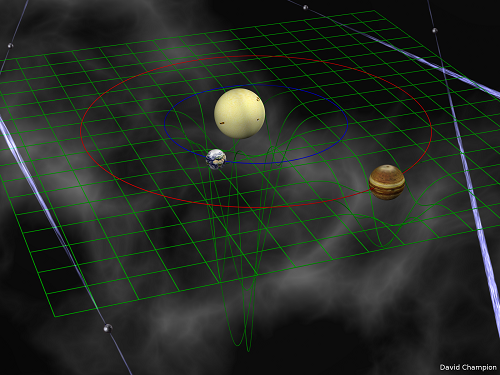 Image: Planets in the solar system with their masses determined by means of pulsar timing observations. Credit: David Champion.

Thus far the method has been used to weigh Mercury, Venus, Mars, Jupiter and Saturn (with moons and rings). The mass of the Jovian system can be calculated to a value far more accurate than the best Pioneer and Voyager spacecraft results, though not quite as accurate as the value measured by the Galileo spacecraft. Spacecraft will continue to be the best source of planetary weight measurements, but for planets not being probed by spacecraft, the pulsar measurement will provide accurate data, becoming more accurate as measurements are repeated over time.

This story takes us deep into the Solar System and involves more than the known planets. The kind of data being used may help us with a variety of unknown bodies. From the paper:

The pulsar timing technique is also sensitive to other solar system objects such as asteroids and currently unknown bodies, e.g., trans-Neptunian objects (TNOs). Measurements of anomalous period derivatives and binary period derivatives for a number of millisecond pulsars have already been used to place limits on the acceleration of the Solar System toward nearby stars or undetected massive planets… Pulsar timing array experiments with a wide distribution of pulsars on the sky will be sensitive to the dipolar spatial dependence resulting from any error in the solar system ephemeris, including currently unknown TNOs.

Thus exquisitely sensitive timing data gathered at Parkes, Arecibo and the German Effelsberg instrument, useful in the search for gravitational waves, opens up a new investigative tool for planetary measurement and the hunt for unknown bodies in our system. It’s easy to see why this emerged: The kind of tiny changes in pulsar timing that could flag gravitational waves has to be distinguished from timing error caused by objects in our Solar System. And this is interesting:

Limits for unknown masses have also been placed by spacecraft using deviations from their predicted trajectories. Doppler tracking data from the two Pioneer spacecraft were searched for accelerations due to an unknown planet. The anomalous acceleration detected in these data… is attributed to non-gravitational sources (Anderson et al. 2002) and is not detected in planetary measurements (Folkner 2010).

Previous post: A Near-Term Read on Life in the Galaxy