The image of double suns rising over the planet Tatooine from the first Star Wars movie never quite goes away. I remember watching the film in a theater about a week after its release, being dazzled by the visuals but thinking that a planet in an orbit around both stars of a binary would have to be well outside the habitable zone. I didn’t believe in Tatooine, in other words, though now I’m a bit more circumspect. A couple of years ago Cheongho Han (Chungbuk National University, Korea) wrote a paper suggesting that microlensing might be of use in finding a planet fitting this description, if indeed such a planet exists. 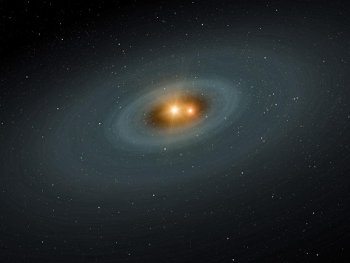 Then yesterday Massimo Marengo dropped me a note about new work he has been involved in that puts a damper on the idea of terrestrial worlds in such settings. Long-time Centauri Dreams readers will remember Marengo, whose fascinating work on Epsilon Eridani we’ve covered in these pages on several previous occasions. Now at Iowa State University, the astrophysicist has been studying tight double-star systems, using data harvested from the Spitzer Space Telescope.

Working with principal investigator Jeremy Drake (Harvard-Smithsonian Center for Astrophysics), Marengo and team are learning that the problem with tight binaries is the chance for planetary collisions. We’re talking about a class of binaries called RS Canum Venaticorums (RS CVns) that are separated by something on the order of 3.2 million kilometers, roughly two percent of the distance between the Earth and the Sun. That produces orbits of just a few days and tidal lock, with each star presenting the same face to the other.

Image: This artist’s concept illustrates a tight pair of stars and a surrounding disk of dust — most likely the shattered remains of planetary smashups. Using NASA’s Spitzer Space Telescope, the scientists found dusty evidence for such collisions around three sets of stellar twins (a class of stars called RS Canum Venaticorum’s or RS CVns for short). Credit: NASA/JPL-Caltech.

Imagine two stars similar to the Sun in size and about as old as the Sun when life first evolved on the Earth. They’re possessed of strong magnetic fields and giant spots, the result of their fast spin, and the magnetic fields, in turn, drive powerful stellar winds that slow the stars and pull them closer together over time. Now things get tricky, for the new work suggests that the gravitational influences of the stellar pair continually change as the stars approach each other, causing planets and other objects circling the stars to experience collisions.

“These kinds of systems paint a picture of the late stages in the lives of planetary systems. And it’s a future that’s messy and violent.”

Indeed. And the evidence from Spitzer seems tight. The instrument can see the glow of hot dusky disks around three tight binary systems matching this description. The thinking is that the dust found here would normally have dissipated from stars at this level of maturity. Something, in other words, is causing fresh dust to be created, implying a chaotic process. Planetary collisions are the most likely candidate. 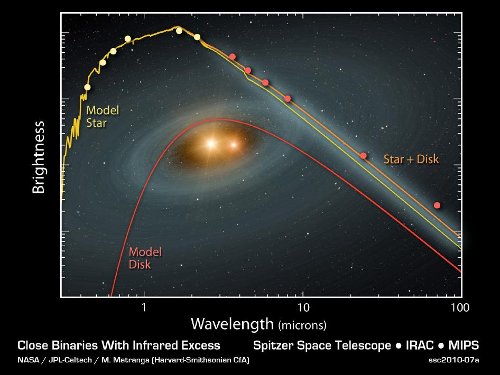 Image: Spitzer’s cameras, which take pictures at different infrared wavelengths, observed the signatures of dust around three close binary systems. Data for one of those systems are shown here in orange. Models for the stars and a surrounding dusty disk are shown in yellow and red, respectively. The disk reveals that some sort of chaotic event — probably a planetary collision — must have generated the dusty disk. Credit: NASA/JPL-Caltech/Harvard-Smithsonian CfA.

We know that planets can exist around closely-spaced binaries — a tight eclipsing binary system called HW Virginis, for example, is known to be orbited by two gas giants. But HW Virginis c has a semi-major axis of 3.6 AU, while HW Vir b is at 5.3 AU. Both are well outside the habitable zone of the stars they orbit. In any case, this binary system involves a B-class and an M-class star, not the kind of system depicted in Tatooine or examined in the current work.

With the stars under study, we have more of a When Worlds Collide scenario than anything from Star Wars. Here’s Jeremy Drake on the matter:

“This is real-life science fiction. Our data tell us that planets in these systems might not be so lucky — collisions could be common. It’s theoretically possible that habitable planets could exist around these types of stars, so if there happened to be any life there, it could be doomed.”

Another exoplanet orbiting twin stars is found around the binary PSR B1620-26, but here again, we’re not exactly dealing with Sun-like stars. The planet involved orbits a pulsar and a white dwarf. And back to Cheongho Han for a moment. The scientist believes that if a terrestrial world did exist in a stable orbit around two stars similar to our Sun, the only way to find it would be through microlensing. Radial velocity studies avoid short-period binaries, but the microlensing signature should be detectible. Marengo and Drake’s work suggests that if such a world is found, it may be a rarity indeed.