In a sense the planets discovered around the Sun-like star HD 10180 are no surprise. We’ve long assumed that planetary systems with numerous planets were common. We lacked the evidence, it’s true, but that could be put down to the limitations of the commonly used radial velocity method, which favors massive worlds close to their stars. But we’re getting much better at radial velocity work and, using instruments like the HARPS spectrograph at the European Southern Observatory’s La Silla (Chile) telescope, we’re teasing out ever more exquisite signals from distant systems. More and more multiple-planet scenarios are in our future.

Noting that high-precision radial velocity surveys are now able to detect planets down to roughly 1.9 Earth masses, the paper on the HD 10180 work frames the situation this way:

Preliminary results from the HARPS survey are hinting at a large population of Neptune-like objects and super-Earths within ∼0.5 AU of solar-type stars (Lovis et al. 2009). Moreover, hundreds of small radius candidate planets have been announced by the Kepler Team (Borucki & the Kepler Team 2010). Clearly, the exploration of the low-mass planet population has now fully started, and will become the main focus of the field in the coming years.

But five planets at one go is still an eye-opener, especially when you consider that two others are also possible here. It took six years of study of this star, some 127 light years away in the constellation Hydrus, to bag the five leading signals, representing planets like Neptune in being between 13 and 25 Earth masses. These worlds circle their star in orbits that range from six to 600 days at distances between 0.06 and 1.4 AU. Some accounts are citing similarities with our Solar System because of the number of worlds, but we might just as well note the differences, including the crowding of the inner system and the presence of massive planets there. 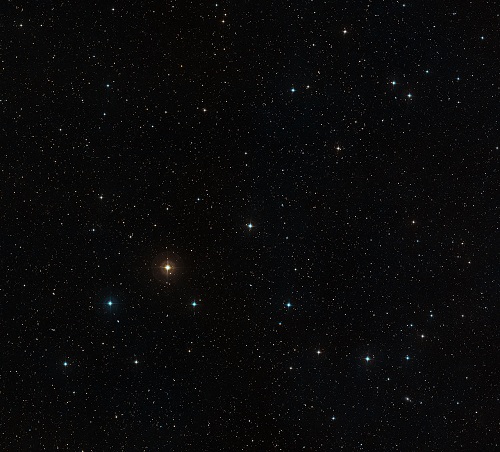 Image: This wide-field image shows the sky around the star HD 10180, which appears as a fairly bright star just below the centre. The picture was created from photographs taken through red and blue filters and forming part of the Digitized Sky Survey 2. The field of view is approximately three degrees across. The coloured halos around the stars are artifacts of the photographic process and are not real. The remarkable planetary system around this star is far too faint and close in to be visible in this image. Credit: ESO, Digitized Sky Survey 2. Acknowledgement: Davide De Martin.

The paper notes that systems like this open up new realms of study:

It is expected that the characterization of planetary system architectures, taking into account all objects from gas giants to Earth-like planets, will greatly improve our understanding of their formation and evolution. It will also allow us to eventually put our Solar System into a broader context and determine how typical it is in the vastly diverse world of planetary systems. The characterization of a significant sample of low-mass objects, through their mean density and some basic atmospheric properties, is also at hand and will bring much desired insights into their composition and the physical processes at play during planet formation.

Those two additional worlds, whose existence Christophe Lovis (Observatoire de Genève), lead author of the cited paper, says is supported by solid evidence, include a 65 Earth-mass gas giant in a 2200-day orbit and a world that, if confirmed, would be the least massive exoplanet yet discovered, with a mass of about 1.4 times that of the Earth. This one is not exactly a candidate for astrobiology, though, orbiting the host star at a distance so close (0.02 AU) that a planetary year lasts a mere 1.18 Earth days. This ESO news release likens the possible world to the rocky inferno CoRoT-7b.

If there were a gas giant like Jupiter in this system, we should have evidence of it. And note that the orbits of all these planets seem to be almost circular. Says Lovis:

“Systems of low-mass planets like the one around HD 10180 appear to be quite common, but their formation history remains a puzzle.”

Although HD 10180 presents us with one of fifteen planetary systems known to have at least three worlds, that number will grow quickly. The new planets were found in a radial velocity survey of about 400 bright FGK stars in the solar neighborhood using HARPS, and the paper notes that ‘many new systems are about to be published.’ We’re homing in on the ability to derive statistical properties of the low-mass planet population, a new phase in the exoplanet hunt, one that focuses on complex planetary systems rather than individual planets.

The HD 10180 system shows the ability of the RV technique to study complex multi-planet systems around nearby solar-type stars, with detection limits reaching rocky/icy objects within habitable zones. Future instruments like VLT-ESPRESSO will build on the successful HARPS experience and carry out a complete census of these low-mass systems in the solar neighborhood, pushing towards planets of a few Earth masses at 1 AU.