Somewhere around 2000 light years away in the direction of the constellation Lyra is a Sun-like star orbited by at least two Saturn-class planets. What’s interesting about this news, as just discussed in the Kepler press conference I’ve been listening to this afternoon, is that for the first time we’ve detected and confirmed more than one planet around a single star using the transit method. But much more important, transit timing variations — the leads and lags of the two planets as they transit the star as seen from Kepler — can be used to tease out new and significant information.

Kepler-9b and 9c mark the first clear detection of transit timing variations by Kepler, allowing us to study the gravitational interactions between the planets involved. And that’s useful stuff: We see two planets in a 2:1 orbital resonance, one with a 19.2-day orbit, the other with a 38.9-day orbit. As the inner planet completes two orbits, the outer planet completes one. The variations in transit time (TTV) help us establish the mass of the two planets, showing that both have a mass and radius slightly smaller than Saturn. Peg size and mass and you can derive planetary density. 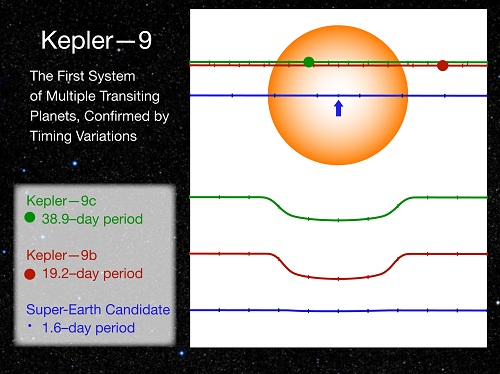 We’ve known for some time that transit timing variations should be a useful part of the exoplanet toolbox, but seeing them working in practice is a powerful proof of concept. The hope, of course, is that similar TTV methods can be put to work on smaller worlds down to terrestrial mass planets in the habitable zones of their stars. In fact, in this case, the Kepler 9 system sports a candidate that is 1.5 times the radius of Earth, a possible super-Earth whose barely detectable signature is not yet sufficient for us to declare the planet confirmed.

The other aspect of the Kepler 9 system that received discussion at the news conference was what it can tell us about planetary formation theories. These planets orbit well within the orbit of Mercury in our own system, and the assumption is that they could not have formed there. Planetary migration resulting in a 2:1 orbital resonance is something that points back to an earlier set of conditions whose nature will take many more precision measurements — in this and many other systems — to understand. But ultimately, the way a planetary system looks today can reveal much about its history.

Is there good news in this for terrestrial worlds? Not yet, but there is at least a hint. Alycia Weinberger (Carnegie Institution of Washington) made this case at the conference:

Ultimately Kepler will find many multiple planet systems. We will know how many systems show these resonances, how often and when different kinds of migration occurred while planets were forming. Our 1.5-Earth radius candidate, if real, survived whatever migration it and the other planets went through, a fact that bodes well for systems with substantial migration.

In other words, the Kepler 9 system may eventually tell us that the movement of gas giants into the inner system does not necessarily spell the doom of smaller worlds there, if and when we confirm the existence of the super-Earth. Weinberger goes on:

It would be interesting to know that planetary systems with different histories can produce low mass planets or planets more Earth-like in size. Resonances like those Kepler-9b and 9c demonstrate can ensure stability and produce planetary systems that last billions of years. Frequent resonances, in other words, are good news for low mass planets, giving them stable orbits. And transit timing variations can help us deduce the masses of the planets involved.

Not a bad haul for this interesting system, about which we’ll learn more as the Kepler mission progresses. As I said above, produce figures on the size and mass of a planet and you can derive its density, helping astronomers understand its composition, from gaseous to rocky or water planets. We’ll see what transpires with that candidate super-Earth — if it’s there, it’s in a scorching 1.6-day orbit, another hellish world singed by its star. But perhaps Kepler 9 helps point the way to a future news conference when an Earth-like planet in the habitable zone will be announced.