Photos of the Earth from a significant distance are always fascinating, dating back to the spectacular shot of the rising Earth over lunar mountains taken by Apollo 8 in December of 1968. The image below, showing Earth and its Moon, comes from the Messenger spacecraft, taken at a distance of some 183 million kilometers. I see things like this and think about our future imaging of exoplanets, and the possibilities of space-based missions that can study their atmospheres. Learning how we look helps us understand what to look for around other stars, and also offers a bit of the ‘wow’ factor. 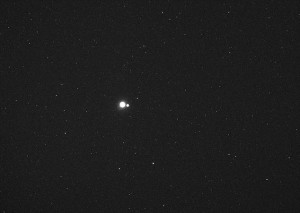 We’re nowhere near this kind of imaging with exoplanets but we’re getting better all the time, and that’s providing some curious results. HR 8799 is the interesting young system some 130 light years from Earth (in Pegasus) that has yielded direct images of three planets. Some eighteen months after the discovery of the system here, we’ve now managed to get a spectrum of HR 8799b, useful for what it can tell us about temperatures, clouds, and chemical composition.

Image: The Earth/Moon system as seen from the Messenger spacecraft. Credit: NASA/JHU-APL.

HR 8799b shows little or no methane in its atmosphere, a fact that used in conjunction with models of low-temperature atmospheres yields an estimate of 1200 K (926 degrees Celsius or 1700 Fahrenheit) as the coolest possible temperature for this young object. Oddly, the planet ought to be some 400 Kelvin cooler than what the new measurements show, extrapolating from the amount of energy the planet emits and its assumed age.

The culprit? Scientists at the University of Hawaii, who made these measurements at the Keck Observatory, think dust in the planet’s atmosphere must be to blame. If you change the computer models of gas giant planets to incorporate thick dust clouds, you wind up with essentially the same result. Thus direct spectroscopy of exoplanets may be telling us that young gas giants are cloudier than we had realized. The results are a reminder, as if we needed one, that exoplanets will continue to surprise us, especially given the fact that direct imaging of these worlds has just begun. Only six planets — three in this system — have been directly imaged. Says Michael Liu, co-author of the paper on this work:

“Direct studies of extrasolar planets are just in their infancy. But even at this early stage, we are learning they are a different beast than objects we have known about previously.” 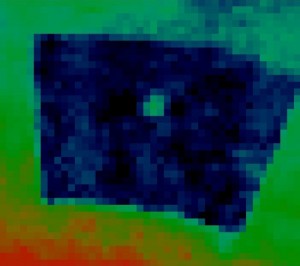 True enough, and we should consider the advantages that direct imaging puts on the table. For one thing, it gives us the opportunity to study planets in wide orbits — the planets around HR 8799, discovered by Christian Marois (Herzberg Institute of Astrophysics) and team in 2008, orbit the star with semimajor axes of 24 AU, 38 AU and 68 AU respectively, with the interesting possibility of a 1:2:4 orbital resonance (not yet confirmed). At 68 AU, HR 8799b is too far from its star for radial velocity detection, but direct imaging gives us both planet and spectrum.

Image: Keck II image of the young extrasolar planet HR 8799b, seen as the point source in center of image. The bright light from the parent star HR 8799 is seen in the background in yellow/red and has been removed in an annular region centered on the planet. Credit: Brendan Bowler and Michael Liu, IfA/Hawaii.

But are the HR 8799 objects planets or brown dwarfs? At least one recent paper has suggested the latter, but this work advocates a younger age for the system and sees the objects as hot, young planets. Even so, explicit comparisons with brown dwarfs are useful, and the authors note that these objects are massive analogs of giant planets, objects that offer up similar physics, radii, effective temperatures and cooling histories. The comparison is intriguing, and allows the researchers to peg HR 8799b as a unique object:

Altogether, our spectral and photometric comparisons to field brown dwarfs suggest a spectral type between L5 and T2 for HR 8799 b. Although peculiar compared to most L and T dwarfs in the field, the planet’s photometry is consistent with the reddest field L dwarfs. These results imply that HR 8799 b is the lowest-mass L/T transition object currently known.

And later, the paper refers to the planet this way:

These observations, combined with spectroscopy of HR 8799 c and d, will elucidate the physical properties of this emerging class of low-mass objects which are characterized by low surface gravities, low luminosities, and exceptionally cloudy atmospheres.

‘An emerging class of low-mass objects’ is a phrase that reminds us how much we’ve learned in the past decade about small, cool stars and planets that skirt the boundary between planet and star. The paper is Bowler et al., “Near-Infrared Spectroscopy of the Extrasolar Planet HR 8799b,” accepted by The Astrophysical Journal (preprint).