Faces from Earth: A Personal View

My friend Tibor Pacher quotes from Hermann Hesse on the front page of his PI Club site: “To let the possible happen, the impossible must be tried again and again.” No one works harder at pushing the boundaries of the possible in terms of public outreach on interstellar topics than Tibor, whose efforts have ranged from the Faces from Earth project (championing messages from humanity on deep space missions) to the MiniSpaceWorld contest (soliciting ideas and designs for space-themed exhibits). In today’s essay, Tibor looks back at a memorable evening in his youth, and ponders the sources of inspiration even as he gears up Faces from Earth for a new campaign based on the Voyager missions and the deeper meaning of their ‘golden records.’ 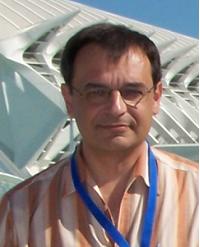 I remember a wonderful starry night at Lake Balaton in Hungary, some forty years ago in my childhood. In those times street light was much more sparse in the evening than today, even in such holiday locations as Balaton. We watched an open air movie and were on the way back to our vacation home. I’ve forgotten the movie but not the starry night with its blinking jewels.

That time I had already seen the fantastic adventures of the spaceship Orion – the now legendary Space Patrol series started on 17 September 1966 in Germany and came in early 1968 to Hungary – and some of the Apollo landings as well. Perhaps this night was the first one in my life as a then wannabe astronomer when I found myself pondering whether we could get to the stars one day and wondering what we would find there if we did.

Later, I became a theoretical physicist, studied cosmology, and tried to figure out if in our world there might emerge a hyperdrive like the one in Asimov’s Foundation universe (I did not succeed, unfortunately, but neither have I given up the search). Then my paths led me to very different, much more earthbound fields like business consulting on financial processes, which secured my living. I have seen lots of interesting companies, met people from very different countries from Kazakhstan to Georgia, Singapore to Sweden and Bosnia-Hercegovina, but after all this, I came to the conclusion that this kind of job is something which cannot satisfy my needs to learn more about the Universe.

So early this millenium I started once again to dig deeper into the really interesting things, to rediscover my early intellectual loves, topics like interstellar spaceflight and life in the universe. My notes tell me that it was the 2nd of July 2004 when the name peregrinus interstellar was born, which I now regularly use for my celestial wanderings. (The term “peregrinus” means “wanderer”, “stranger”, or “alien” and originates in ancient Rome, denoting people not having Roman rights. It is also the root for the word “pilgrim”. In Hungarian, the word “peregrinus” was also used in earlier times to mean a wandering student).

Now, six years later, I often remember that starry night forty years ago at Lake Balaton. These seemingly distinct events mark perhaps the two most relevant cornerstones on the way to my current projects, amongst them Faces from Earth. Surely like the old wanderers, looking at the stars I enjoy the beauty of the heavens, and, as many others, often pause for a moment to think about our place in the Universe. I also believe that it is good for a wanderer to be prepared for strange encounters, whatever nice places he approaches.

Humanity has made its first steps on the long path to the stars, having sent out the first ambassadors, the Pioneer and the Voyager probes, in the 1970’s. On these four probes there is a “visiting card”, the Pioneer plaques, and the Golden Records – attempts to tell as much as possible about the makers of the spacecraft, should they be found by some other species, or perhaps by our own descendants, in the future.

Since our vessels are actually uninvited wanderers into unknown territory, as Larry Klaes’ says, “…[this] makes it vitally important that some kind of relevant information about ourselves is placed on each and every spacecraft sent into the Milky Way.” Within the framework of Faces from Earth we aim to help in preparing our future interstellar wanderers – and all of us, who stay at home but perhaps will experience an encounter with E.T. – with information on Messages from Earth – history, rationale, possible effects on humanity, organizing events to educate the public about space and astronomy, and promotion of deep space missions supporting the creation of the next artifact messages to put on board.

“The importance of being in essence respectful citizens of the galaxy and giving some kind of valuable legacy to our children is a driving force in the creation of Faces From Earth. It is designed to bring together people from multiple fields and disciplines across human culture to more fully represent the beings and items of our world to the Universe on all future deep space missions.” 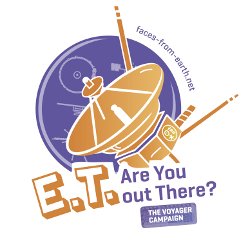 You probably will understand why one of the Faces from Earth projects is especially important for me. This is the campaign series “E.T. Are You Out There?”, which introduces the notions of possible extraterrestrial life and interstellar messages to school students, and constitutes a part of our attempt to “give some valuable legacy to our children.” On May 19 of this year, we came together at 5:30 PM – school scheduling and some unfortunate circumstances prevented a couple of students from coming, so we had a familiar meeting with Arianna, Corvin, Louisa, Michel and Vincent (12 to 14 years old) in my home in Molfsee, next to Kiel, “the sailing city”. However, being such a small group we had the opportunity to go into lots of details, checking information in the Internet immediately – about the Viking experiments on Mars (searching for life indicators), the Grand Tour of the Voyagers (the rare lineup of the outer planets in the Solar System), and, of course, the chances to talk to E.T., to name but a few – before the exciting time of creating the pictorial messages and the preparation of the balloon payloads arrived.

Luckily, we had two balloons for each message :-) We went then to the “launch pad” – a couple of minutes walk to a gentle hill – and the countdown (we’ve got it, Space Patrol Orion) started: … drei … zwei… eins… zero: “Guten Flug” (good flight) – and the Molfsee messages began their journey. It is very improbable that anybody will ever read them, but we hope that the children, not only the five in Germany, but the other approximately 100 we reached on three continents with our first campaign in May 2010, will be proud of their first symbolic message to E.T. and inspired to learn more.

Our second campaign “E.T. Are You Out There? – The Voyager Campaign” has just started on 5th September 2010, the 33rd anniversary of Voyager 1’s launch, and runs until 26 September. We hope that many young school students and their educators will remember the celebration of the Voyagers, with their own messages painted and perhaps released in some enjoyable way, just as the kids did in May.

As you can see in our summary video of the May campaign, to send a message to a hypothetical E.T. can be a deeply human endeavour.

Previous post: A Deepening Look at the Digital Sky