The ExoClimes 2010 conference (“Exploring the Diversity of Planetary Atmospheres”) is well in progress in Exeter (UK) as I write, with its talks now being posted online and the hope that video of the presentations will soon be available on the conference site. Already the latest lingo is in the air, as in ‘Hermean,’ a term used by Brian Jackson (NASA GSFC) to describe hot, rocky exoplanets with tenuous atmospheres. The analogy is with Mercury, though these are even hotter places with magma oceans and melted surfaces, leading to what Jackson calls a ‘rock vapor atmosphere’ that just might be visible given sufficient spectral resolution. 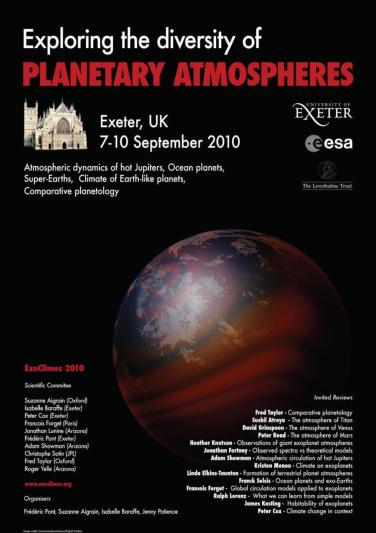 But what catches my eye this morning, as I survey the ongoing conference buzz online from an ocean away, is Franck Selsis (Laboratoire d’Astophysique de Bordeaux) and his work on the atmospheres of short-period terrestrial exoplanets. Selsis is interested in the habitability of planets around M-dwarfs, noting their strong tidal interactions with their primary, the likelihood of tidal locking for planets in circular orbits, and the problems of atmospheric freeze-out on the dark side, calling for a heat redistribution mechanism to produce habitable surface conditions.

The broader issue, obviously of interest for this conference, is how a terrestrial world in the habitable zone of an M-dwarf would maintain an atmosphere in the first place. What Selsis argues in his presentation (I’m looking at his slides) is that finding and characterizing dense atmospheres on super-Earths is a major objective for understanding how such atmospheres form and survive. Active M-dwarfs show flare activity longer than the more sedate K and G-class stars, so we need to understand how atmospheres act here, and for that we need statistics.

That’s where it gets tricky. Transiting worlds within 10 parsecs aren’t going to offer the statistics we need, leading Selsis to speculate on whether we can measure the phase curves of non-transiting terrestrial exoplanets. If so, we can increase the number of targets by a factor of 10, but only if we can work out ways to detect and measure the infrared phase curve based on reflected light from the planet, as opposed to the primary and secondary transits of more established methods. A large, rocky planet around a low-mass M-dwarf is a good test case. Make it hot enough (0.05 AU) and you get a surface temperature that’s not too hot to hold an atmosphere, and you also get the highest planet/star contrast available for such a planet.

Other Exeter news: Sushil Atreya (University of Michigan) is interested in another kind of hot world, a version of Saturn’s moon Titan. Imagine a nitrogen-rich atmosphere like Titan’s in a temperature regime where chemical reactions are accelerating rather than moving in ultra-slow motion. A hot Titan would be a world much more like Venus than the Earth. But given the right migration scenario, such a world should be out there, its atmosphere filled with carbon soot and sulphur, in the grip of heat and abundant greenhouse gases. Atreya’s presentation lays out the case, and I’m looking forward to the video of it and other talks as ExoClimes 2010 continues.