I was fortunate enough to meet Joel Poncy (Thales Alenia Space, France) at last year’s deep space conference in Aosta, where he gave the audience the lowdown on an extraordinary mission concept, an orbiter of the Kuiper Belt object Haumea. Haumea is a tricky target, lacking an atmosphere that would allow aerobraking and pushing all our limits on propulsion and power generation. But Poncy’s team worked out a design using either electric or magneto-plasma technologies, assuming a gravity assist to shorten the journey for arrival around 2035.

In a later lunch conversation, Poncy talked to me about the benefit of probing the Kuiper Belt, and the collateral advances that such a mission would bring in terms of developing the orbiters, landers and deep-drilling capabilities we’ll need to explore planetary moons like Europa or Ganymede. Sometimes you choose targets, in other words, not only for their immediate payoff, but because they become part of the process of developing next generation tools. My two-part look at the Haumea mission, written last summer, begins here, with follow-up in this article the next day.

Now I see that Poncy is working on a unique solar sail concept he presented yesterday at the European Planetary Science Congress, which is taking place at the Pontifical University of Saint Thomas Aquinas in Rome. Poncy’s team has been studying ‘data clippers,’ spacecraft equipped with solar sails that are expressly designed to get large amounts of data back to Earth. And though we don’t often think of data return as a major problem, it becomes one as we push deeper into space and develop more sophisticated probes. Poncy puts it this way:

“Space-rated flash memories will soon be able to store the huge quantities of data needed for the global mapping of planetary bodies in high resolution. But a full high-res map of, say, Europa or Titan, would take several decades to download from a traditional orbiter, even using very large antennae. Downloading data is the major design driver for interplanetary missions. We think that data clippers would be a very efficient way of overcoming this bottleneck.”

The mention of Europa is particularly telling, given how much trouble we had with Galileo’s high-gain antenna, the lack of which caused the data flow from Europa and other Jovian targets to be much slower than anticipated. Moreover, a single orbiter with an equipment malfunction is, like Galileo, able to rely only on onboard backups and whatever software fixes can be sent.

So how do we proceed? The data-clipper would approach an orbiter, upload its stored data, and then make a flyby of the Earth, downloading the information to a station on the ground. Develop an entire of fleet of these vehicles and we could support planetary missions throughout the Solar System, including those interesting objects in the Kuiper Belt like Haumea. The work builds on recent solar sail successes like IKAROS but also looks ahead to magnetic sail possibilities. The latter would tap not solar photons but particles in the solar wind for their propulsive force. Needless to say, sail missions into the outer system would require hybrid propulsion, and it’s interesting to note that JAXA is already working on hybrid sail/ion propulsion concepts for a proposed Jupiter mission as a follow-on to IKAROS. 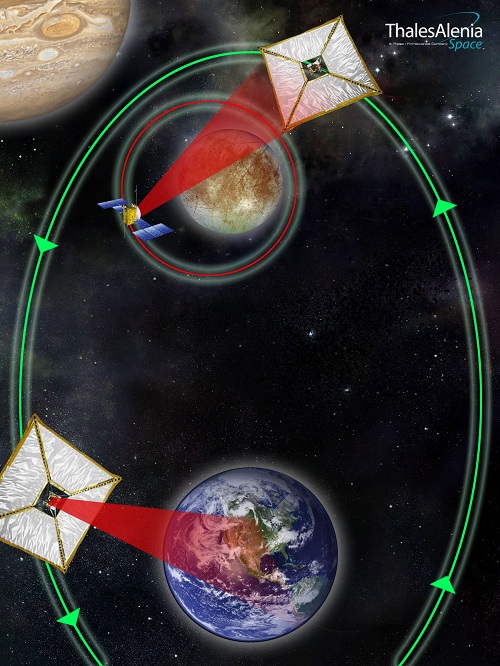 Moreover, data-clippers take advantage of the huge advances in miniaturization we’ve seen in digital electronics, allowing us vast amounts of data storage and long mission times with a properly shielded craft. Let me quote Poncy on this again:

“Using the Sun as a propulsion source has the considerable advantage of requiring no propellant on board. As long as the hardware doesn’t age too much and the spacecraft is maneuverable, the duration of the mission can be very long. The use of data clippers could lead to a valuable downsizing of exploration missions and lower ground operation costs — combined with a huge science return. The orbiting spacecraft would still download some samples of their data directly to Earth to enable real-time discoveries and interactive mission operations. But the bulk of the data is less urgent and is often processed by scientists much later. Data clippers could provide an economy delivery service from the outer Solar System, over and over again.”

The first data clipper mission could launch in the late 2020s, meaning that mission planners will want to include the technology in any thinking about future missions, the roadmap for which must be generated many years in advance. Think of fleets of these data harvesters bringing back the imagery and scientific data on planets, moons and objects of interest throughout the Solar System, without having to work with the minuscule bandwidth offered by current methods.

Sometimes, it turns out, just picking up an object and taking it somewhere is the best way to proceed. I remember a discussion with Vinton Cerf’s team on the ‘interplanetary Internet’ project out at the Jet Propulsion Laboratory some years back. I was taking voluminous notes as the team discussed what is called ‘disruption-tolerant networking’ (DTN), a way of using not a continuous connection (think FTP) but store-and-forward methods to hold data for later transmission. All this can be automated to reduce the load on Earth-based receivers.

And somewhere in that meeting, Cerf noted “You can’t underestimate the bandwidth of a pickup truck full of CDs driving from one coast to the other.” That’s bandwidth, too, getting the data where they need to be in large quantity and with low overhead. Poncy’s data clippers make me think of that pickup truck, only in this case it’s loaded not with CDs but with exotic planetary data, delivered in such quantity that we could set up serious mapping of objects that today are no more than bright spots in our surveys. All this is decades away — we have to get orbiters to such places — but the mid-term future could hold a planetary data bonanza delivered to our door.