Imagine being Jean-Pierre Lebreton. The man behind the Huygens probe, Lebreton and the ESA team behind him hold the record for the most distant landfall in history, the 2005 descent onto the surface of Titan. I have no idea what dreams this man might have had in his childhood, but one of mine was descending through Titan’s thick atmosphere to see its never before glimpsed surface. Huygens pulled off the feat with astonishing ease, descending slowly and steadily while snapping panoramic views of the enigmatic moon. Doubtless Lebreton has much to share about all this at this year’s European Planetary Science Congress, now being held in Rome.

EPSC is the major meeting in Europe for planetary scientists, and it’s no surprise that Titan appears prominently in the news from the conference. Cassini’s Visual and Infrared Mapping Spectrometer instrument (VIMS) has been keeping an eye on Titan’s cloud cover since the orbiter first took up its vigil around Saturn, and 2000 VIMS images have now been used to construct a long-term study of Titan’s weather that was presented at the meeting today. VIMS has made over 20,000 Titan images in visible wavelengths and infrared, from which Sébastien Rodriguez (AIM laboratory – Université Paris Diderot) culled the 2000-image database for the study.

Have a look at seasonal change on Titan as shown in the image below. This is a world with seasons that last for seven terrestrial years, and the new work shows significant activity between July of 2004, a time of early summer in the southern hemisphere, and April of 2010, the beginning of northern spring. Cloud cover has decreased near both of Titan’s poles, which had been heavily overcast during the late southern summer until a few months before the equinox in 2008. 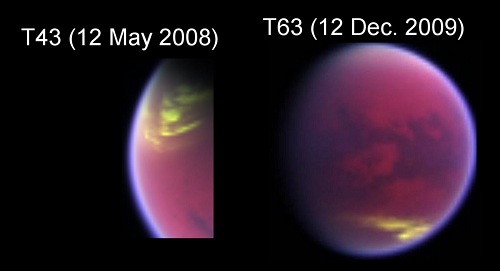 “Over the past six years, we’ve found that clouds appear clustered in three distinct latitude regions of Titan: large clouds at the north pole, patchy cloud at the south pole and a narrow belt around 40 degrees south. However, we are now seeing evidence of a seasonal circulation turnover on Titan – the clouds at the south pole completely disappeared just before the equinox and the clouds in the north are thinning out. This agrees with predictions from models and we are expecting to see cloud activity reverse from one hemisphere to another in the coming decade as southern winter approaches.”

Rodriguez used a cloud model developed by Pascal Rannou (Institut Pierre Simon Laplace) to analyze cloud developments over time, all part of developing a global understanding of climate on the distant moon. The team believes that northern polar clouds of ethane form in Titan’s troposphere in winter at altitudes of 30 to 50 kilometers owing to ethane and aerosols being supplied from the stratosphere. In the southern hemisphere, mid- and high-latitude clouds are the result of upwelling surface air enriched with methane. The model thus far fits observation, but Rodriguez’ team will be able to use the Cassini extended mission (ending in 2017) to observe further seasonal changes from mid-winter to mid-summer in the northern hemisphere.

The VIMS instrument is a story in itself, a color camera that takes pictures in 352 wavelengths ranging between 300 and 5100 nm. By contrast, the visual spectrum is in the range between 400 and 700 nm, a small window in the larger region covered by VIMS. The instrument can measure the chemical composition of a surface or an atmosphere (or, for that matter, of objects in Saturn’s rings) by measuring this visible and infrared energy. Because clouds have different optical qualities at different wavelengths, we can use VIMS data to see how the atmosphere of Titan absorbs or reflects light to understand the composition of its changeable cloud cover.

Fine spring weather for the northern hemisphere on Titan, then, with Rannou’s global climate models seemingly on target in describing it. Right now Titan stands alone in offering an off-planet source for study of surface liquids and their contribution to weather patterns in a cycle somewhat reminiscent of Earth’s hydrological cycle, though based on methane. One day, given advances in our instruments, we’ll be studying similar cycles on planets around other stars, armed with the experience we’ve gained by mastering the frigid (94 K, or −179 °C) seasons of Titan.