It’s hard to believe it’s been over six years since the launch of the European Space Agency’s Rosetta mission, now well enroute to comet 67P/Churyumov-Gerasimenko, a ten year journey that will be completed in 2014. Upon reaching the comet, Rosetta will begin an extended encounter that includes an orbiter that will circle Churyumov-Gerasimenko for thirteen months as it moves toward the Sun, and a small lander that will investigate surface conditions. We learned more about the mission in today’s sessions of the European Planetary Science Congress, now being held in Rome.

Jeremie Lasue (Los Alamos National Laboratory) presented the latest Rosetta findings at the conference, drawing on computer models that predict the behavior of the comet’s nucleus over the course of the spacecraft’s operations. Landing on a comet is tricky business, because dust, ice and frozen carbon dioxide and carbon monoxide will be active as the comet’s tail begins to form. What Lasue and colleagues have done is to predict how heat is transferred through the nucleus and the rates at which the gases and dust in the cometary nuclei will be vaporized. 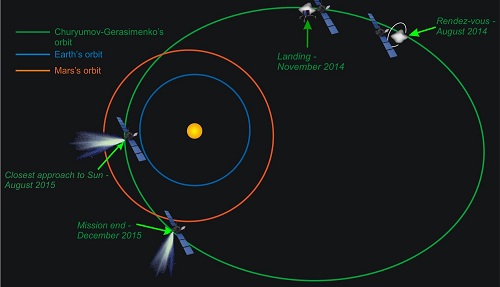 Image: the orbit of comet Churyumov-Gerasimenko and Rosetta during the encounter (not to scale). Credit: ESA/Jeremie Lasue/INAF.

According to Lasue, the studies make it clear that Rosetta’s lander, called Philae, will find the optimal landing site on the southern hemisphere of the comet:

“Churyumov-Gerasimenko is a time capsule holding material from the birth of the Solar System. The nucleus’s southern hemisphere has been heavily eroded, so Philae will not have to drill down far to find those pristine samples. At the time of Rosetta’s rendezvous, gas will be escaping mainly from the northern hemisphere, so it will be safer for Philae to touch down in the south. In addition due to the orientation of the comet, the southern hemisphere will be protected from extreme temperature variations at the time of delivery.”

Of course, nothing is static on such a changeable body. But at the time of landing, it’s the northern hemisphere that will be illuminated and emitting gas and dust, with the south relatively quiet. That southern hemisphere erosion is the result of several orbits in which the south pole has been most exposed to the Sun’s heat, all of which could make for a bonanza for Philae in terms of ancient cometary materials. The lander will be drilling down approximately thirty centimeters to collect the samples it will analyze with its onboard instrumentation. The scientists believe a dust mantle up to 20 centimeters deep will have formed in the landing region.

“When Philae lands, temperatures at the equator may rise above freezing and could fluctuate by around 150 degrees Celsius. However, the regions close to the south pole will keep more stable temperatures. From our present results, we’ve concluded that the southern hemisphere promises the best landing sites. As more data on Churyumov-Gerasimenko becomes available to better quantify our results, we will be able to add to the picture and help prepare for a safe landing for Philae.” 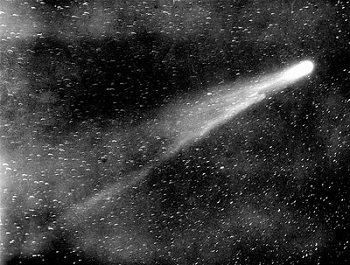 Analyzing comets is an activity with a long pedigree. It was back in 1910 that spectroscopic studies of comet tails conducted by Sir William Huggins came into public discourse with the revelation that among the organic molecules found in comets was the gas cyanide. As the Earth was then expected to travel through the tail of Comet Halley, speculation ran rampant that people would be asphyxiated by the cometary materials. Gunter Faure and Teresa Mensing note what happened in their textbook Introduction to Planetary Science: The Geological Perspective (Springer, 2007):

During the night of May 18/19 of 1910, when the Earth passed through the tail of comet Halley, some people took precautions by sealing the chimneys, windows, and doors of their houses. Others confessed to crimes they had committed because they did not expect to survive the night, and a few panic-stricken people actually committed suicide. Enterprising merchants sold comet pills and oxygen bottles, church services were held for overflow crowds, and people in the countryside took to their storm shelters. A strangely frivolous mood caused thousands of people to gather in restaurants, coffee houses, parks, and on the rooftops of apartment buildings to await their doom in the company of fellow humans.

Image: This image of Comet Halley, taken in 1910, inspired dread in some of those who saw it. Credit: New York Times.

Needless to say, the speculation was groundless. The Earth passed through only a small part of the comet’s tail, but in any case, a more substantial passage through a comet’s tail had occurred in 1861 without incident. Cometary materials are far too tenuous to create deadly conditions on the surface of the Earth (a cometary impact is, of course, quite another thing). Looking further ahead, if astronauts ever get to the surface of a comet, all that hydrogen cyanide could be a problem, which is why David Brin and Gregory Benford invented ‘cyanutes’ — bioengineered microbes — to protect the crew in their novel Heart of the Comet (1986).

Today we’re more interested in the organic molecules that can be found in comets as having a role in the seeding of the early Earth with the chemicals needed for life to begin. Rosetta’s work around and on 67P/Churyumov-Gerasimenko should produce a full catalog of organic materials in the comet using mass spectrometry on both the orbiter and lander. Moreover, Rosetta’s studies of right- and left-handed amino acids in this primitive environment may help us learn whether the left-handed variety could have had a celestial origin.