A Look Into Titan’s Haze

Voyager’s controllers thought so much of Titan that when Voyager 1 approached Saturn and the choice arose between sending it on to the outer planets or taking a sharp jog off the ecliptic to view the enigmatic moon, they chose the latter. We all know the result: Titan remained as mysterious as ever, its surface shrouded in orange haze. But you can see why they needed that look. Here was a moon that was large enough to be a planet, with a thick atmosphere and all kinds of speculation about what was on its surface. No wonder Titan was the most tempting of targets, and one of huge scientific value. 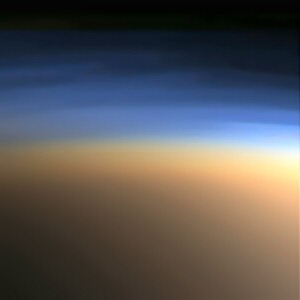 These days we routinely get Cassini imagery from Titan flybys, and the place has gained definition. I remember once asking Geoffrey Landis, having read his superb 2000 novel Crossing Mars, whether Mars had become more or less an everyday place to him, like Cleveland (he lives there, working at NASA GRC). And it was true: After you study and survey and write novels about a place, it does become tangible, acquiring familiar placenames and recognizable surface features. Titan is becoming like that, with its lakes of liquid methane/ethane, its well studied seasonal change, its steadily building catalog of placenames.

Image: Voyager 1 couldn’t see through Titan’s haze, but after numerous Cassini passes and simulations here on Earth, we’re learning much more about this world’s atmosphere and its implications. Credit: NASA/JPL/Caltech.

And now we’re gaining insights about the chemical processes at work on the distant moon. It turns out that, as we’ve long suspected, the basic ingredients for life are available here, and what’s more, they’re occurring in the outer layers of the atmosphere without the need of a surface. As revealed in simulations carried out in France by a team led by researchers from the University of Arizona, a wide variety of complex organic molecules including amino acids and nucleotide bases can be produced in a simulated Titan atmosphere. Sarah Hörst, who works the university’s Lunar and Planetary Lab, helped to lead the research effort:

“Our team is the first to be able to do this in an atmosphere without liquid water,” says Hörst. “Our results show that it is possible to make very complex molecules in the outer parts of an atmosphere.”

The five nucleotide bases life uses on Earth to make the genetic materials DNA and RNA – cytosine, adenine, thymine, guanine and uracil — all turn up in the simulations, and so do the amino acids glycine and alanine. The work was presented at the Division of Planetary Sciences meeting in Pasadena that has produced so much interesting outer system work this year, including the results on Eris and the work on Neptune’s interactions with the Kuiper Belt that we looked at on Friday. Titan’s haze, we now learn, may be a reservoir of prebiotic molecules, and we have the interesting possibility that such precursors may have fallen to Earth out of its own primordial haze as life began to take hold here.

That smoggy orange ball Voyager I saw is loaded with aerosols laden with organic molecules. Here things get even more interesting, because while Titan’s surface probably lacks the energy needed to break apart atmospheric nitrogen, methane and carbon monoxide, rearranging them into more complex prebiotic molecules, the upper reaches of the atmosphere are exposed to ultraviolet radiation, not to mention charged particles from the Sun that have been deflected by Saturn’s magnetic field. The researchers mixed gases found in Titan’s atmosphere in the lab in Grenoble and simulated the energy hitting the upper atmosphere by using microwaves, causing some of the raw materials to bond together.

Image: A window into Titan’s atmosphere: Energized by microwaves, the gas mix inside the reaction chamber lights up like a pink neon sign. Thousands of complex organic molecules accumulated on the bottom of the chamber during this experiment. (Photo: S. Hörst)

The results from the work were striking. 5,000 different molecular formulae turn up with these simulations as analyzed by a mass spectrometer. Says Hörst:

“We really have no idea how many molecules are in these samples other than it’s a lot. Assuming there are at least three or four structural variations of each, we are talking up to 20,000 molecules that could be in there. So in some way, we are not surprised that we made the nucleotide bases and the amino acids… We never started out saying, ‘we want to make these things,’ it was more like ‘hey, let’s see if they’re there.’ You have all those little pieces flying around in the plasma, and so we would expect them to form all sorts of things.”

Is the same kind of chemistry at work in the atmospheres of planets around other stars? The Titan simulations give the idea continued plausibility, another indication that life may be commonplace in the galaxy or, at least, that the conditions for its formation should not be rare. We’ve come a long way from the iconic Chesley Bonestell images of Titan to today’s hazy landscapes sculpted by liquid ethane/methane and laden with a dense prebiotic soup of an atmosphere. It’s a fascinating world, as we’ve long suspected, and it’s giving us clues about the chemistry that produces biological material and eventually leads to life.

Next post: Interstellar Flight: The Case for a Probe