Long before I knew what ideas for interstellar flight were out there in the literature, I always saw the idea of a trip between the stars in Homeric terms. It would be an epic journey that, like that of Odysseus, would resonate throughout human history and become the stuff of legend, even myth. In back of all that was the belief that any vehicle we could design that could carry people and not just instruments to the stars would be a ‘generation ship,’ in which the crew were born, raised their families, lived their lives and died while the ship, moving at maybe 1 percent of light speed, pressed on to destination. 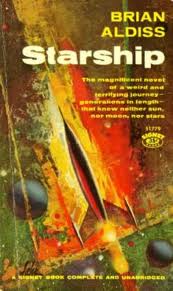 That familiar science fiction trope still has a ring of truth about it, because if for some reason we as a species decided we absolutely had to get a few human beings to Alpha Centauri, about the only option we would have for the near-term is a solar sail and a close-pass gravity assist by the Sun, and even in the best case scenario, that still works out to around a thousand year journey. Epic indeed. Now and then I re-read old science fiction tales like Brian Aldiss’ Non-Stop’ (published in the US as Starship) and Robert Heinlein’s Orphans of the Sky to be reminded of how firmly such notions managed to settle into our psyche as the idea of star travel grew. And I think about Odysseus and crew on that wine-dark sea that would almost destroy them.

We’d like to do better, of course, which is why long-shot concepts like Alcubierre’s ‘warp drive’ continue to intrigue us. Igor Smolyaninov, now at the University of Maryland, has been working with metamaterials to study the Alcubierre concept of altering spacetime itself so that a ship could move in a kind of ‘bubble’ that never exceeds the speed of light through space while radically reducing travel times. As Richard Obousy showed us yesterday, Smolyaninov’s interest is in developing the needed tools to study the warping of spacetime in the laboratory.

Metamaterials are the result of engineering that alters how light behaves as it moves through the materials, and Smolyaninov is interested in how they can help us simulate the behavior of light under the kind of extreme gravitational conditions a warp drive would create. I think Richard did a terrific job of showing us that what we are doing here is to simulate exotic light ray trajectories because of the unique properties of metametarials. We are definitely not talking about creating anything beyond a simulation of what happens to spacetime near a sublight warp drive.

What Smolynaninov wants to demonstrate, then, is a tool for the further study of these ideas, and I leave it to those better qualified than myself to judge the quality of his findings. Warp drive is a fantastically problematic concept, one that demands exotic matter with negative energy density, and one that suffers from instability from quantum effects and may well be prohibited by the laws of physics, as Smolyaninov is quick to point out. Nonetheless, he adds:

…our results demonstrate that physics of a gradually accelerating warp drive can be modeled with newly developed “perfect” magnetoelectric metamaterials built from split ring resonators. Since even low velocity physics of warp drives is quite interesting, such a lab model deserves further study.

I’m reminded of Claudio Maccone’s continuing work on the Karhunen-Loève Transform (KLT) and the mathematical tools that may one day be needed to communicate with spacecraft moving at relativistic speeds. Yes, we are generations away from such spacecraft (although the KLT techniques Maccone studies have already been used for spacecraft communication with the Galileo mission), but creating the mathematical frameworks and the laboratory experiments to help us study the implications of fast interstellar flight is part of building toward that future.

Also along the lines of fast travel comes news from NASA Ames director Pete Worden that the center has begun a project with DARPA called ‘the Hundred Year Starship.’ Worden made the announcement at a Long Now Foundation event in San Francisco, but went on to spend most of his talk on unrelated near-term ideas like electric propulsion and microwave thermal propulsion, in which power is beamed to a spacecraft and used to heat a propellant, allowing missions to be designed in which the fuel onboard can be reduced, to the benefit of payload size.

The latter ideas have little to do with the ‘Hundred Year Starship,’ but just who is in charge of this project, how NASA and DARPA will develop it, and what its goals are (does it envision a starship that can be launched within a hundred years, or a starship that can complete a hundred-year mission to a star?) remains to be seen. DARPA, according to this account, is putting $1 million into the project, with $100K from NASA. More on this as it becomes available, and here’s to the notion of keeping our enthusiasm for the challenge even at this early stage of building the tools we need to define it. On that score, an occasional dose of science fiction is highly recommended.