‘Snowball Growth’ and the Centauri Stars

With three groups now looking hard at Alpha Centauri for planets, let’s hope our nearest stars don’t do for us what Gliese 581 has. First we had a habitable planet in Gl 581c, then we didn’t. Then Gl 581d looked a bit promising, and may skirt the outer edges of the habitable zone, although the jury is still out. Gl 581g looked to be the winner, the fabled ‘Goldilocks’ planet, but now the evidence for it seems weak and its existence is called very much into doubt. Gl 581 keeps dealing out winners and then calling them back, a frustrating period for all concerned.

What we’d like to find at Alpha Centauri, then, is something unambiguous. But while we wait for answers, the issue of how planets form in close binary systems like Alpha Centauri is under the microscope. Centauri A and B have a mean separation of 23 AU, closing to within 11.2 AU (think of another star as close to ours as Saturn) and receding up to 35.6 AU (roughly Pluto’s distance). Proxima is much further out at 13,000 AU and is the nearest individual star to the Sun. We know there are feasible planetary orbits around Centauri A and B. The question is how small, rocky worlds might form in this environment in the first place. 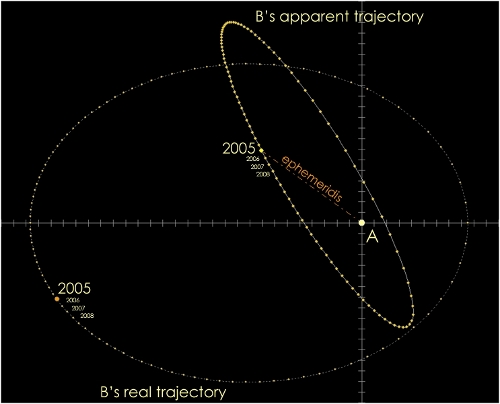 Growing Planetesimals Out of the Dust

We saw yesterday that the initial phases of planet formation are at issue. In the core accretion model, planetesimals form from a dust disk and, through a series of collisions, eventually form into planetary embryos. Much remains to be learned about the transition from dust to planetesimal, as well as the planetesimal collision stage. A new paper by Ji-Wei Xie (Nanjing University) et al. looks at the transition between planetesimal formation and the beginning of the collisions between them, a period the paper refers to as the ‘snowball phase.’

Where this departs from older work is that many earlier scenarios for growing planetesimals start with the planetesimals in place and go from there. The new paper questions this approach, positing the snowball phase as a transition period when isolated planetesimals exist in a disk where most of the mass is still in the form of dust grains:

We outline a new growth mode, which dominates during this early phase, during which planetesimals experience negligible gravitational or collisional interactions with one another, and grow mainly (or solely) via the accretion of dust or ice that they sweep up−in the manner of a rolling snowball. In this paper, we refer to this dust-fueled planetesimal growth phase as the “snowball” growth phase.

What the paper finds is that in close binaries, snowball growth overcomes a key problem, that high impact velocities prevent kilometer-sized planetesimals from growing into planetary embryos:

Indeed, this dynamically excited environment, which is hostile to mutual planetesimal accretion, is on the contrary favorable to growth by dust sweeping. If efficient enough, snowball growth allows planetesimals to grow large enough, 50-100 km, to be protected from mutually destructive impacts.

Going from planetesimals to planetary cores, then, becomes a viable process once the objects are large enough (the 50 to 100 kilometers mentioned above) to survive high speed collisions. The ‘snowball’ model allows the planetesimals time to grow through the accretion of ice and dust that is swept up in the manner of a rolling snowball. Snowball growth as defined here begins with the formation of the first planetesimal and ends when planetesimal collisions become the dominant growth mode. The paper derives the snowball growth rate, shows how long it will last, and considers how the planetesimals can grow around single stars and binaries.

All of this winds up looking promising for environments like Alpha Centauri, and again, its scenario is possible because the authors are defining a growth phase where the planetesimals are emerging from the dust disk but are still sparse — not yet in an era of mutual planetesimal annihilation — growing by sweeping up dust in the protoplanetary disk. Snowball growth is a mechanism that, the authors point out, needs more detailed studies to improve its modeling. I suspect that before we get too far along in that process, we’ll have news from our planet hunting teams about the presence (or lack of same) of planets around Centauri A and B.

The paper is Ji-Wei Xie et al., “From Dust To Planetesimal: The Snowball Phase?” accepted by The Astrophysical Journal and available as a preprint.