Crunching the Numbers on Earth-Size Planets

Finding Earth-size planets around other stars is a long-cherished goal, and new results from Geoffrey Marcy and Andrew Howard (UC Berkeley) give us reason to think they’re out there in some abundance. As reported in Science, the astronomers have used the 10-meter Keck telescopes in Hawaii to make radial velocity measurements of 166 G and K-class stars within 80 light years of Earth. The resulting five years of data suggest that about one in every four stars like the Sun could have Earth-size planets, although none has thus far been detected.

“Of about 100 typical Sun-like stars, one or two have planets the size of Jupiter, roughly six have a planet the size of Neptune, and about 12 have super-Earths between three and 10 Earth masses,” said Howard, a research astronomer in UC Berkeley’s Department of Astronomy and at the Space Sciences Laboratory. “If we extrapolate down to Earth-size planets — between one-half and two times the mass of Earth — we predict that you’d find about 23 for every 100 stars.”

Howard and Marcy were homing in on close-in planets, but their findings support the possibility of finding more Earth-sized planets at greater distances, and that includes worlds in the habitable zone. But the findings seem at variance with some models of planet migration, which suggest that interactions in the gas disk around the star would cause many planets to spiral inward. That would create what the researchers call a ‘planet desert’ in the inner region of solar systems, one that these two researchers do not see in their findings. Says Marcy:

“Just where we see the most planets, models predict we would find no cacti at all. These results will transform astronomers’ views of how planets form.”

And let me quote the abstract on this:

Theoretical models of planet formation predict a deficit of planets in the domain from 5 to 30 Earth masses and with orbital periods less than 50 days. This region of parameter space is in fact well populated, implying that such models need substantial revision. 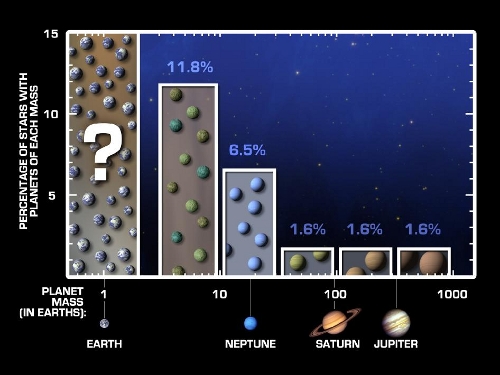 Image: The data, depicted here in this illustrated bar chart, show a clear trend. Small planets outnumber larger ones. Astronomers extrapolated from these data to estimate the frequency of the Earth-size planets — nearly one in four sun-like stars, or 23 percent, are thought to host Earth-size planets orbiting close in. Each bar on this chart represents a different group of planets, divided according to their masses. In each of the three highest-mass groups, with masses comparable to Saturn and Jupiter, the frequency of planets around sun-like stars was found to be 1.6 percent. For intermediate-mass planets, with 10 to 30 times the mass of Earth, or roughly the size of Neptune and Uranus, the frequency is 6.5 percent. And the super-Earths, weighing in at only three to 10 times the mass of Earth, had a frequency of 11.8 percent. NASA/JPL-Caltech/UC Berkeley

Out of the 166 stars surveyed, 22 had detectable planets, with 33 planets being found in all (twelve planet candidates are still in the process of confirmation, which could raise the total as high as 45 planets around 32 stars). We’ll get another read on this from Kepler, for plugging these conclusions into its survey of 156,000 stars should yield 120 to 260 ‘plausibly terrestrial worlds’ with orbital periods of less than 50 days around G and K stars. Adds Howard: “One of astronomy’s goals is to find eta-Earth, the fraction of Sun-like stars that have an Earth. This is a first estimate, and the real number could be one in eight instead of one in four. But it’s not one in 100, which is glorious news.”

Needless to say, Earth-sized planets orbiting a Sun-like star at roughly one quarter of an AU do not make for habitable places, but these are statistical calculations that give us a rough read on what to expect. If we follow up with the assumption that thus far undetected Earth-sized planets should also form in the habitable zone, then G and K stars should yield numerous targets for future terrestrial planet hunter missions. We’re still looking for a ‘second Earth’ in the habitable zone of a Sun-like star, but these calculations suggest the prospects are promising.