Astrobiology and the Kuiper Belt

Here’s an interesting bit of news from the New Horizons team. Remember that the spacecraft, having made its pass by the Pluto/Charon system in 2015, will be moving ever deeper into the Kuiper Belt. It’s been the hope of mission planners that a close study of one or more objects there might be possible. Now astronomer Scott Sheppard (Carnegie Institution of Washington) has announced that he has detected the first asteroid in Neptune’s trailing Trojan zone (the planet’s L5 point), an area New Horizons will fly through before arriving at the Pluto/Charon binary.

2008 LC18 is not itself in range for a New Horizons flyby, but mission principal investigator Alan Stern notes its significance in a recent report on the mission’s Web site: “ …its discovery shows that additional and potentially closer Neptune Trojans that New Horizons might be able to study could be discovered in the next three years.” And that gives us an interesting mission extension for New Horizons, to take advantage of the instrumentation we’ve put deep into the outer system. Closest approach to Pluto occurs in 1719 days.

Colors of a KBO

Thus far we’ve been able to image about 1000 objects in the Kuiper Belt, and it’s interesting to note that they come in a range of colors. Work at NASA GSFC (Greenbelt, MD) now offers up a computer model that tells us how the icy bodies acquire their red, blue or white tints. The model is based on incoming radiation and its effects on the different layers of a KBO. 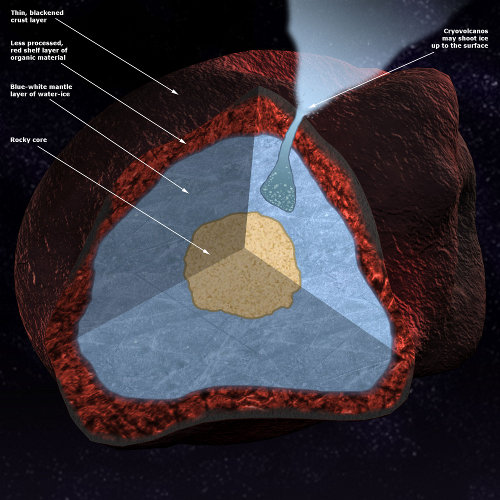 Image: This cutaway model shows a red “shelf” layer of a Kuiper Belt object peeking through the thin, darkened crust above so that the object appears red in telescopes. Credit: NASA/Conceptual Image Lab/Tyler Chase.

I find Kuiper Belt objects utterly fascinating, and not least because of the possible astrobiological interest. Eris, for example, has a bright, icy surface. According to the GSFC model, deeper layers of relatively pure water ice could erupt upwards to form new outer layers on KBOs, accounting for Eris’ brightness. The potential for active processes deep within a KBO is intriguing, and I remember discussing astrobiological possibilities with Joel Poncy at last year’s Aosta conference. Poncy and team (Thales Alenia Space) were investigating a fast orbiter mission to Haumea, which is, like Eris, highly reflective and evidently covered with water ice.

Poncy’s point was that if you’re going to study KBOs in terms of astrobiology, Haumea isn’t the place, because its unusual shape (a flattened ellipsoid) probably derives from a major collision, which would have disrupted the interior processes we want to study. But we now have numerous objects with diameters over 500 kilometers beyond the orbit of Neptune, and we’ll doubtless find hundreds more in coming years. Some smaller KBOs, like 2002 TX300, are possibly the result of the same collision that produced Haumea. 2002 TX300 is highly reflective, its ice covering evidently fresh and thus somehow resurfaced periodically. The case for life inside a KBO is slim, but these intriguing objects may teach us something about life’s early chemistry.

But back to the GSFC work. The colors of Kuiper Belt Objects seem related to the different sizes and orbits we’ve observed since 1992, when the first KBO, 1992 QB1, was discovered. John Cooper, a physicist at Goddard, takes note of KBO diversity:

“There’s a group called the Cold Classicals that move in relatively circular orbits, and are nearly aligned in the same plane as the orbits of the other planets. These are all consistently reddish. Other objects, which might range from red to blue to white, tend to move in more elliptical or inclined orbits, which suggest they came from a different location within the solar system early in its history. So, it’s possible that the uniformly red Cold Classicals represent a more pristine sample, showing the original composition of the Kuiper Belt with minimal disturbances.”

Cooper’s work tells us that radiation should affect different objects in different ways, depending on their location. The so-called Cold Classicals would have formed in an area where plasma ions from the Sun aren’t intense enough to darken the KBO’s outermost surface. Instead, the plasma ions ‘sandblast’ the topmost layer to expose the layer immediately below, with further erosion being produced by dust grains from collisions in the belt. Given enough time, simple chemical reactions producing organic molecules, a kind of radiation ‘cooking’ process mediated by radiation from interstellar space, can then produce the red tint we see on many KBOs.

White Kuiper Belt objects also fit within Cooper’s layer model, which assumes water ices in a deep mantle layer that can erupt onto the surface to leave bright icy patches. “So these may not be dead icy objects,” says Cooper, “they may be volcanically active over billions of years.” Usefully, New Horizons’ pass through this region may yield better surface observations not just of Pluto and Charon but objects beyond that will help us confirm what materials are present. And its readings of the energy distribution and particle count may confirm the factors needed to make Cooper’s model work.

And about astrobiology in the Kuiper Belt?

“When you take the right mix of materials and radiate them, you can produce the most complex species of molecules,” says Cooper. “In some cases you may be able to produce the components of life — not just organic materials, but biological molecules such as amino acids. We’re not saying that life is produced in the Kuiper Belt, but the basic chemistry may start there, as could also happen in similar Kuiper Belt environments elsewhere in the universe and that is a natural path which could lead toward the chemical evolution of life.”