With NASA’s EPOXI mission closing on comet Hartley 2 at 12.5 kilometers per second, be aware that live coverage of the close encounter will begin at 1330 UTC (0930 EDT) on Nov. 4 from mission control at the Jet Propulsion Laboratory. NASA TV streaming video will be available, and you should also be able to watch the action on a JPL Ustream channel. Finally, NASA’s Eyes on the Solar System Web tool, a 3-D environment for Solar System exploration, is available for viewing a real-time animation of the cometary flyby on your PC.

EPOXI is a great instance of re-purposing a spacecraft to extract maximum value. This is the Deep Impact vehicle that gave us such a spectacular view of the impactor smash-up on comet Tempel 1 back in the summer of 2005. Under the name EPOXI, the mission has pressed ahead with two separate objectives, the first being EPOCh, or Extrasolar Planet Observation and Characterization, which has involved a number of nearby stars known to have transiting exoplanets. The idea here was to observe the stars to see if other worlds might be detectable around them. More on this analysis and its potential for finding Earth-like worlds in a day or two.

The spacecraft has also given us useful studies of Earth as seen from a distance, information that should provide perspective as we learn to use spectral information to map continents and oceans on distant worlds. But Hartley 2 is part of the other extended mission, known as the Deep Impact Extended Investigation (DIXI). The mission will use the two Deep Impact telescopes with digital imagers that were used for Tempel 1, along with an infrared spectrometer, in making this fifth close encounter of a comet. Closest approach at Hartley 2 should be at about 700 kilometers.

Meanwhile, we’re already getting interesting information, including the fact that Hartley 2 is quite active. The spacecraft caught two jets firing off the comet’s surface over a 16-hour period on October 26, viewing these from a distance of 8 million kilometers. The video below shows the jets in action as seen by the High-Resolution Imager and the Medium Resolution Imager.

The jets are thought to originate from similar latitudes on the comet’s nucleus. Says EPOXI principal investigator Michael A’Hearn (University of Maryland):

“These movies are excellent complements of one another and really provide some excellent detail of how a comet’s jets operate. Observing these jets from EPOXI provides an entirely different viewpoint from what is available for Earth-based observers and will ultimately allow a proper three-dimensional reconstruction of the environment surrounding the nucleus.”

Arecibo’s planetary radar has also been focused on Hartley 2, with observations that began on October 24 and continued through the 29th. The comet came within 17.7 million kilometers of Earth on the 20th, its closest approach since discovery in 1986. The comet in these images appears to EPOXI project manager Tim Larson (JPL) as ‘a cross between a bowling pin and a pickle,’ a vegetable analogy quickly picked up by mission scientist Jon Giorgini (JPL):

“Observing comet Hartley 2 from the Earth with radar was like imaging a 6-inch spinning cucumber from 836 miles away. Even without all the data in, we can still make some basic assertions about Hartley 2. Its nucleus is highly elongated and about 2.2 kilometers long, and it rotates around itself about once every 18 hours. In addition we now know the size, speed and direction of particles being blown off the comet, and we immediately forwarded all this information to the EPOXI team.”

Below is the pickle in situ: 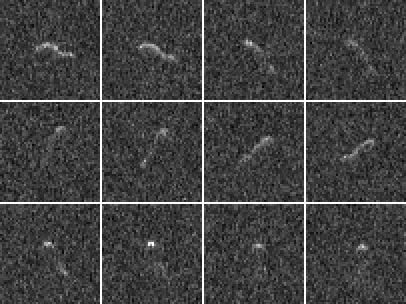 Image: Twelve radar images of the nucleus of comet Hartley 2 were obtained by the Arecibo Observatory’s planetary radar from Oct 25 to 27, 2010. Image Credit: NAIC-Arecibo/Harmon-Nolan.

Hartley 2 is offering up the best extended view of a comet in history as it makes its pass through the inner Solar System, and the creative recycled use of the spacecraft offers savings of up to 90 percent over the cost of a similar mission built from scratch. We’re going to be learning a lot more about Hartley 2 in short order, although expect images of closest approach to be delayed after the encounter as Deep Impact reorients its high gain antenna on Earth, at which point the downloading of cometary closeups can begin in earnest.