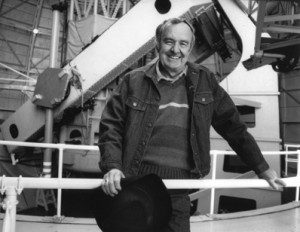 I can’t begin today’s entry, which deals with an unusual planet indeed, without first mentioning the passing of Allan Sandage, a man whose work I have admired for my entire adult life. A protegé of Edwin Hubble, Sandage would refine the latter’s findings, re-examining Hubble’s distance measurements to galaxies like Andromeda and helping us fine-tune our estimates of Hubble’s Constant, a measure of the expansion of the universe. In fact, our current estimate, 71 kilometres per second per megaparsec, is only slight off Sandage’s 1958 result. A final paper, on RR Lyrae variable stars, appeared as recently as June, one of 500 papers the astronomer wrote. Astronomy Now has a fine obituary of Sandage, who died at the age of 84.

Looking Back from the Future

Maybe it’s the death of Sandage that has me in a retrospective mood as I tackle a most unusual exoplanet story. All morning I’ve been remembering a passage from H.G. Wells’ The Time Machine in which the time traveler has found his way to the remote future and looks out upon a desolate world populated by huge, crab-like creatures. On the beach he has the view of the swollen Sun, bloated and entering what we would now call its red giant phase. Wells writes:

I moved on a hundred years, and there was the same red sun–a little larger, a little duller–the same dying sea, the same chill air, and the same crowd of earthy crustacea creeping in and out among the green weed and the red rocks. And in the westward sky, I saw a curved pale line like a vast new moon.

‘So I travelled, stopping ever and again, in great strides of a thousand years or more, drawn on by the mystery of the earth’s fate, watching with a strange fascination the sun grow larger and duller in the westward sky, and the life of the old earth ebb away. At last, more than thirty million years hence, the huge red-hot dome of the sun had come to obscure nearly a tenth part of the darkling heavens.

The imagery was powerful in late Victorian England and it’s still powerful today. The dread of ‘that remote and awful twilight’ overcomes the time traveler, who makes his way back to his own time for a last encounter with his friends before disappearing forever. Maybe because of an early reading of Wells’ novel, I’ve always been fascinated with stars at the end of their lifetimes, stars that, like our Sun, will exhaust their hydrogen fuel and grow into red giants, engulfing their inner planets and possibly offering an opportunity for life on outer worlds and moons.

Image: I think that’s a Richard Powers cover on this old Berkley paperback (check out the handling of the time machine itself, surely a Powers signature). In any event, it gets across the beach scene in the novel, with the suggestion of a crab-like creature at right and, in the sky, a swollen, dying Sun.

Enter HIP 13044 b, a newly discovered planet around a most interesting star. This is a gas giant with a minimum mass 1.25 times that of Jupiter, and it’s intriguing because it has survived the period of massive stellar expansion. HIP 13044, its host star, has contracted once again and is now burning helium in its core, a ‘horizontal branch star’ of the kind that planet hunters have generally had little to do with. But the European team using the MPG/ESO 2.2-metre telescope at ESO’s La Silla Observatory in Chile has its eye on dying stars and the planets that have survived their death throes, says Johny Setiawan (Max-Planck-Institut für Astronomie):

“This discovery is part of a study where we are systematically searching for exoplanets that orbit stars nearing the end of their lives. This discovery is particularly intriguing when we consider the distant future of our own planetary system, as the Sun is also expected to become a red giant in about five billion years.”

And just what happens to a planet in a situation like this? We have much to learn, but we do know that HIP 13044 b is, at its closest point in an elliptical orbit, less than a single stellar diameter from the surface of the star, about 0.055 AU, completing an orbit every 16.2 days. The researchers believe the planet’s orbit might once have been larger, but contracted during the red giant phase that would have swallowed the star’s inner planets, assuming they existed.

But at least some evidence points to their existence. HIP 13044’s fast rotation, higher than the norm for a horizontal branch star, can be explained by assuming that the star swallowed its inner planets during the red giant phase, which would have caused its spin to increase.

The same fate probably awaits HIP 13044 b, for its host star will begin to expand once again in what could be a glimpse of the future for planets like our own Jupiter. But HIP 13044 b intrigues us on other grounds as well. Its primary contains few metals, elements above hydrogen and helium, causing Setiawan to add, “It is a puzzle for the widely accepted model of planet formation to explain how such a star, which contains hardly any heavy elements at all, could have formed a planet. Planets around stars like this must probably form in a different way.”

Moreover, the new planet orbits a star that is not native to the Milky Way at all, but a part of the Helmi stream, a collection of stars born in a dwarf galaxy and captured by the Milky Way between six and nine billion years ago. So we have a planet that is, despite its long tenure in our own galaxy, an extragalactic world, one found through radial velocity studies using the FEROS spectrograph. HIP 13044 b is about 2000 light years from Earth in the constellation Fornax.

We’ve had tentative detections of planets in other galaxies through gravitational microlensing, but no extragalactic planet has yet been confirmed, so HIP 13044 b is the next best thing, a galactic wanderer that found its way to the Milky Way before our own system had even formed. What for H.G. Wells was a scene of the remotest futurity may have played itself out in the unthinkably remote past for any beings that may have existed in the HIP 13044 system. In any case, it’s a system that has much to tell us about planetary fates around red giant stars.

The paper is Setiawan et al., “A Giant Planet Around a Metal-poor Star of Extragalactic Origin,” Science Express 18 November 2010 (abstract).

Next post: Status Report on the Tau Zero Foundation