Interesting chemistry on the surface of Saturn’s moon Rhea seems a natural conclusion following the announcement of the discovery of oxygen in its evanescent atmosphere. And what a difference from Saturn’s largest moon, Titan, whose atmosphere is not only thick, but packed with nitrogen and methane, with little trace of carbon dioxide or oxygen. Rhea’s tenuous exosphere, which includes carbon dioxide, is so thin that its density of oxygen is about five trillion times lower than that of Earth’s atmosphere. Even so, interesting things may happen on an icy surface in this scenario. 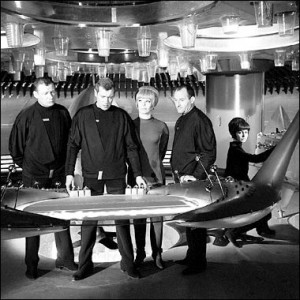 I’m diverted as I write this — pardon the digression, but this does come back to Rhea — because I’m thinking about German friends who are fans of the wonderful 1960’s television show Raumpatrouille (Space Patrol), which followed the adventures of the spaceship Orion some years before Star Trek ever appeared on German screens. First broadcast in 1966, Space Patrol went on to achieve true cult status in West Germany and has legions of fans even today, with numerous novels following long after the show’s demise. And a true Space Patrol fan knows that in episode one, Captain McLane takes the Orion down to the icy surface of Rhea, a place Star Trek‘s Captain Kirk never ventured.

But enough of 1960’s television. The evidence for both oxygen and carbon dioxide on Rhea comes from the continuing work of the Cassini mission. The assessment that accompanies it is that high-energy particles striking the surface dislodge atoms, molecules and ions into the atmosphere. We’re looking, then, at the chemical decomposition of surface water ice as it is radiated by plasma from Saturn’s magnetosphere, an indication that radiation can create complex chemistry on small, icy worlds like this one. Ben Teolis (Southwest Research Institute), a Cassini team scientist and lead author of the paper on this work, thinks processes like this may be widespread:

“The new results suggest that active, complex chemistry involving oxygen may be quite common throughout the solar system and even our universe,” said Teolis. “Such chemistry could be a prerequisite for life. All evidence from Cassini indicates Rhea is too cold and devoid of the liquid water necessary for life as we know it.”

But translate these results to an icy object with liquid water under the surface. According to Teolis (see this JPL news release), if a mechanism existed to transport oxygen and carbon dioxide from the surface to a sub-surface ocean, complex compounds might flourish and lead to the formation of life. As Saturn keeps insisting to us through its varied moons, the earliest precursors of life may be relatively common. “Rhea is turning out to be much more interesting than we had imagined,” says Cassini project scientist Linda Spilker (JPL). But then, that’s been true of almost all the large moons we’ve looked at around our gas giants. 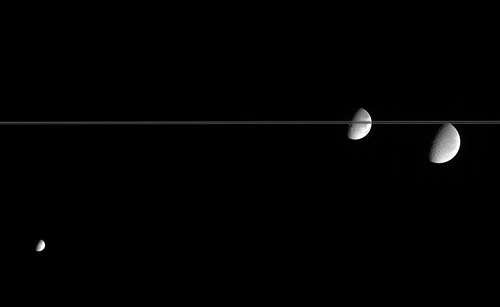 Image: This fantastic view shows, from left to right, Saturn’s moons Mimas, Dione and Rhea, on the far side of Saturn’s nearly edge-on rings. The trailing hemispheres of all three moons are sunlit here, and wispy markings can be seen on the limbs of both Dione and Rhea. The diameter of Mimas is 397 kilometers, Dione is 1,118 kilometers and Rhea is 1,528 kilometers. The image was taken in visible blue light with the Cassini spacecraft narrow-angle camera on March 15, 2005, at a distance of approximately 2.4 million kilometers from Saturn. The image scale is 14 kilometers per pixel. Credit: NASA/JPL/Space Science Institute.

So how much oxygen are we talking about? The Cassini plasma spectrometer, and in particular its electron spectrometer, found peak densities of oxygen of around 50 billion molecules per cubic meter, with carbon dioxide levels at 20 billion molecules per cubic meter. Moreover, the plasma spectrometer saw strong indications of streams of positive and negative ions with masses that corresponded to ions of oxygen and carbon dioxide. The assumption that the oxygen in Rhea’s atmosphere comes from surface water ice seems reasonable given the rate at which Saturn’s magnetic field sprays the surface with energetic particles trapped in the field.

The carbon dioxide is susceptible to other interpretations, perhaps the irradiation of organic molecules trapped in Rhea’s water ice, but possibly the result of dry ice dating back to the solar nebula. A third possibility: Carbon dioxide could be the remnant of carbon-rich materials left by meteor strikes, all of which fits with the dark, carbon-based coating that appears on the surface.