Transits Near and Far

Last night’s lunar eclipse is the first I’ve seen used as the hook for a story on exoplanets in the popular press, as it was in this Christian Science Monitor story yesterday. Maybe that’s a sign that we’re beginning to relate the familiar things we see in the sky to the distant and less well understood, placing ourselves in a larger, cosmic context. Or maybe it’s just because the idea of extraterrestrial life sells well in Hollywood and people have gotten enthusiastic about the prospects that it might actually be out there on some distant world. Whatever the case, it’s good to see exoplanet science in the newspapers again (and thanks to Erik Anderson for the tip on the CSM article).

Eclipses change what we see on the lunar surface as the Earth’s atmosphere affects the color of sunlight passing through it. That’s quite an interesting effect for astrobiologists, because studying the light reflected off the moon during an eclipse is a way for astronomers to practice the detection of biomarkers in an exoplanet atmosphere. A transiting exoplanet gives us the chance to study the spectral signatures of atoms and molecules as starlight passes through its atmosphere. CSM writer Pete Spotts explains how the Moon can help us tune up our techniques, focusing on the work of Enric Palle (Instituto de Astrofisica de Canarias):

From the moon’s perspective during an lunar eclipse, Earth is a transiting planet. It blocks direct sunlight that otherwise would shine on the moon.

But the moon still receives and reflects sunlight that passes through Earth’s atmosphere from the daylit half of [the] planet. An observer on the moon would see a dark disk ringed by a thin, brilliant, sunset-like band of orange and red.

Dr. Palle and his colleagues posited that this light, reflected back to Earth from the moon’s surface, would carry the spectral signatures of molecules in Earth’s atmosphere.

During a 2008 eclipse, Palle and his colleagues used spectrometers in two different parts of the world to make measurements in both visible light and the near-infrared, allowing the scientists to find the signatures of water, methane, carbon dioxide, ozone and molecular hydrogen. Find the same signatures in the atmosphere of a transiting Earth-like world and you’ve located a planet of high astrobiological interest. Palle’s work was extended by Alfred Vidal-Madjar (Institut d’Astrophysique de Paris), who observed the same eclipse in greater detail and was able to make measurements of the thickness of the atmosphere as well as atmospheric molecules.

Transit Science Beyond Kepler and CoRoT

Meanwhile, MIT is running a three-part series on the exoplanet hunt, with a look at two space-based missions to follow up Kepler and CoRoT (thanks to NextBigFuture for the pointer). Kepler is tracking plenty of intriguing stars — maybe half of the 750 stars of interest it has thus far found may have planets — but it’s focused on stars far more distant than the nearby stars from whose potential planets we might eventually get spectroscopic atmospheric readings. The Transiting Exoplanet Survey Satellite (TESS) would examine a wider field of G, K and M-class stars using six onboard cameras, working with the brightest 2.5 million stars in the wide field of view of its equipment. 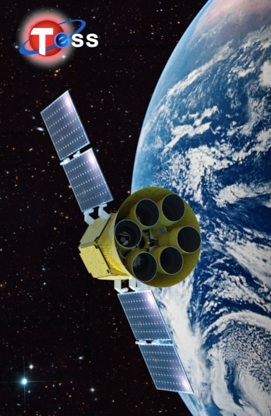 TESS is no stranger to these pages, where we’ve discussed it with enthusiasm because of its potential for detecting between 1600 and 2700 planets within two years (here’s a backgrounder). The TESS team, led by George Ricker (Kavli Institute) hopes to spot between 100 and 300 small planets, including potential Earth analogues. You’ll recall that NASA chose not to follow through on TESS in 2009, but the mission, designed for a small to midsized spacecraft, could rise again as the agency begins accepting new proposals later this year. Don’t count TESS out of the hunt — the budget for missions of this class has almost doubled and TESS could be more attractive than ever if, as deputy mission scientist Sara Seager says, the team can add larger cameras and lenses.

If TESS is a familiar concept, ExoplanetSat is definitely not, but it was inevitable that the tiny CubeSats so many universities are using to conduct observations from space would find their way into one of astronomy’s hottest areas of research. The idea here is to put a single telescope on a single star to search for transits. From the MIT story:

The concept eventually developed into ExoplanetSat, a research program that is designed to launch a fleet of about one dozen “triple CubeSats” (three cubes stuck together), and about another two dozen six-unit CubeSats into low-Earth orbit. Each satellite would have its own computer, processor and tiny camera and would be pointed at an individual star. Although the program doesn’t have funding yet, MIT students will try to build two prototypes within the next two years and then hopefully secure funding for a formal mission to send dozens of the tiny cubes into space.

All of which is exciting news for finding planetary transits, but it’s another issue whether or not we’re going to be able to study the atmospheres of planets as small as the Earth with near-term equipment. It’s one thing to look at reflected light bounced off an object as close as the Moon, but quite another to extract a signature from a small planet awash in the light of its star from dozens of light years away. The James Webb Space Telescope is scheduled for launch in 2014 and should ramp up our ability to study exoplanet atmospheres like those of the ‘hot Jupiters’ we’ve already investigated.

Time will tell whether JWST is up to doing the same for Earth-class planets, but maybe I’ll catch some of Greg Laughlin’s enthusiasm for the idea. Laughlin (UC-SC) had these thoughts on his systemic site last year:

TESS… provides an eminently workable path to the actual characterization of a potentially habitable planet. Included in the 2.5 million brightest stars are a substantial number of M dwarfs. Detailed Monte-Carlo simulations indicate that there’s a 98% probability that TESS will locate a potentially habitable transiting terrestrial planet orbiting a red dwarf lying closer than 50 parsecs. When this planet is found, JWST (which will launch near the end of TESS’s two year mission) can take its spectrum and obtain resolved measurements of molecular absorption in the atmosphere.

As always, we fall back on funding issues and decisions that weigh competing, and often excellent, mission ideas against each other. Let’s pull for TESS even as we continue to follow the fortunes of CoRoT and Kepler in the hunt for smaller planets. TESS would complement both by filling out our knowledge of planets around nearby stars, and as the era of JWST approaches, data from TESS would define our target list for investigating the planets most likely to house life.