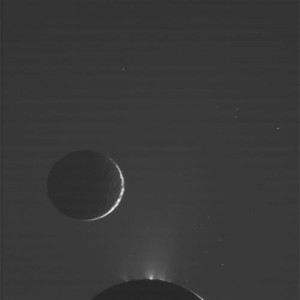 Cassini continues to wow us with holiday imagery, not the least of which is this view from the Enceladus encounter on the 20th, with not only the plumes from Enceladus clearly visible but the adjacent image of Mimas stealing the show (credit: NASA/JPL/Space Science Institute). It’s raw imagery, still unprocessed, but it gets across the wonder of the occasion. Cassini’s next encounter is with Rhea, a flyby at 76 kilometers scheduled for January 11, but it’s two earlier Rhea flybys (from November of 2009 and March of 2010) that caught my eye this morning.

Remember that Cassini’s mission has been extended until 2017, offering us the opportunity to enhance considerably our view of the features on various moons. In fact, the recent images of Rhea have already helped us produce a cartographic atlas of the moon that includes names approved by the International Astronomical Union. The 2009 flyby allowed scientists to create a 3-D image of terrain on Rhea’s trailing hemisphere at higher resolution than ever before, showing a densely cratered landscape bisected by uplifted blocks that suggest recent tectonic stress. 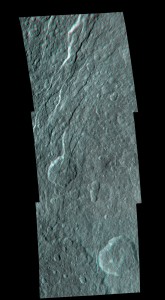 The images also tell us something about where Rhea fits in among the family of Saturnian moons, according to Paul Helfenstein (Cornell University), a Cassini imaging team associate:

“These recent, high-resolution Cassini images help us put Saturn’s moon in the context of the moons’ geological family tree. Since NASA’s Voyager mission visited Saturn, scientists have thought of Rhea and Dione as close cousins, with some differences in size and density. The new images show us they’re more like fraternal twins, where the resemblance is more than skin deep. This probably comes from their nearness to each other in orbit.”

The March flyby featured Cassini’s closest pass yet to Rhea at 100 kilometers, but the January event will be closer still, allowing surface details down to the size of a few meters to be imaged. We’ve been able to discount the idea that a faint ring exists above Rhea’s equator while dramatically enhancing our view of the fractures that the Voyagers found there in 1980 and 1981. Both Rhea and Dione have such features, which were once thought to be deposits from cryovolcanic activity or the residue of icy materials from within the moons. Cassini’s higher resolution shows us that the markings are sections of ice along the walls of steep cliffs.

It’s fascinating how much you can tell about terrain from imagery like this. I’m remembering Richard Greenberg’s book Unmasking Europa (2008), which goes into great detail on the analysis of Europan data returned from the Galileo spacecraft. Europa’s ‘chaotic terrain,’ as analyzed in the famous Conamara Chaos region, shows evidence of melt-through followed by reformation of surface ice, a significant eruption that may have resulted from a breakup caused by tidal forces. In any case, Greenberg shows how to reassemble the ‘rafts’ of individual material, demonstrating how they broke away and migrated to new, equally frozen positions.

On Rhea, we’re not dealing with that fascinating, sub-surface ocean that makes Europa so interesting. But close study of the Cassini images shows how fault topography can cut through craters which are themselves not scarred with smaller internal craters, an indication that they’re comparatively young. Meanwhile, the amount of cratering on Rhea’s plains implies that the moon has had little internal activity to cause repaving of surface materials. All of this makes it appear that whatever tectonic stress has caused the fault topography has made its effects felt comparatively recently. 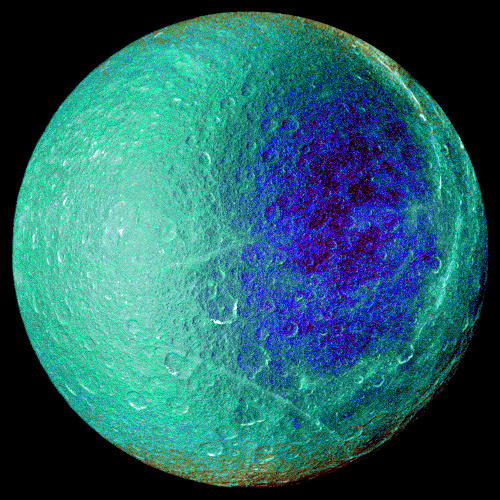 The false-color view above shows the side of Rhea that always faces Saturn. Like other icy Saturnian moons, Rhea shows clear differences in reflectivity and color between its hemispheres that probably reflect changes in surface composition. One cause for this may be the ‘magnetic sweeping’ that occurs when ions trapped in Saturn’s magnetic field are swept over Rhea’s surface. Another likely cause is the impact of meteoritic debris striking one side of the moon more frequently than the other as the tidally-locked moon moves in its orbit. The view here is from approximately 35,000 kilometers.