Europa in the High Arctic

Yesterday’s post discussed interesting terrain on remote moons, Rhea and Europa among them. But while we can piece together much useful information about a moon’s surface and its history from orbit, some of the most provocative places in the Solar System may well require investigation on the ground. In the case of Europa, that means robotic equipment, but the issue is stark, as Damhnait Gleeson (JPL) recently told Wired.com. “What we can see from orbit is such a simple picture compared to the surface,” Gleeson said in a story on Europa analogues on Earth. “From orbit it’s just ice and sulfur. We really have to go deeper to understand the system.” 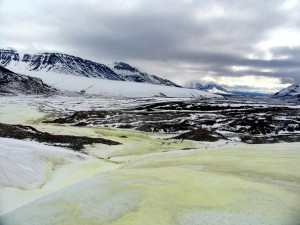 That’s just what Gleeson and colleagues have been doing with data and samples gathered at the Borup Fjord Pass on Ellesmere Island, a remote and all but inaccessible place in the Canadian High Arctic. Gleeson, who as a graduate student worked under Europa specialist Bob Pappalardo (JPL), spent time at the pass in 2006, taking samples of the unique yellow stains left by sulfur-rich springs on the surface of the ice. The team’s work proceeded in a starkly beautiful landscape that scientists believe may hold clues about what happens on Europa, with implications for finding life on the moon.

You may have run into this work when The Planetary Society took an interest and provided partial funding for the 2006 study. The reasons for its interest are apparent when you consider that the amount of sulfur at Borup Fjord Pass is what Pappalardo calls ‘an unusual chemical combination.’ The glacial spring at Borup Fjord deposits sulfur, gypsum and calcite across glacial ice. We’d expect pure sulfur to react with oxygen to form gypsum, but the team was able to show that the sulfur was being replenished by microorganisms. Usefully, the sulfur produced by the microbes shows a complicated structure that is not apparent in control samples.

Cut to Europa, where sulfur-rich materials are found concentrated along cracks and ridges on the surface. Do compounds in the ice contain organic material from the ocean below? It’s a huge question, as Gleeson told Astrobiology Magazine in this article last March:

“Europa’s liquid water layer contains twice the volume of all the Earth’s oceans combined, an enormous potentially habitable environment, not billions of years in the past but at the present day. The composition of the ocean directly controls our view of the habitability of the environment, our understanding of whether microbial life could survive there, and if so, what metabolic pathways or geochemical gradients it could utilize to gain energy.” 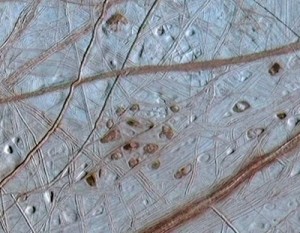 The Borup Fjord Pass studies, then, are all about comparing Europa’s surface compounds with the sulfur and glacial ice combination found on Ellesmere Island, and indeed, the spectral properties of the glacial ice in the Arctic proved similar to what we see on Europa’s surface. All of this makes Ellesmere Island a potential testbed for instrumentation that will one day travel to Europa. Chemicals circulating between the ocean and the ice layer could produce the energy life needs to exist. The Europan surface is doubtless too saturated with radiation for life to exist there, but a robotic lander might uncover traces of organic material migrating from below.

Image: A Galileo image of the Europan surface. Sulfur-rich materials here may help us understand the composition of the astrobiologically interesting ocean beneath the ice. Credit: NASA/JPL/University of Arizona/University of Colorado.

But absent a lander, this work should prove useful for future orbital observation of Europa as well. The Galileo spacecraft’s spectrometers were able to obtain data in the near-infrared but not enough to resolve the mixture of compounds that left this particular spectral signature. Gleeson’s work continues to investigate the Ellesmere sulfur deposits with spectral studies in the near-infrared and space observations of the site from the Hyperion spectrometer aboard the Earth Observing 1 spacecraft. The next time we get to Europa, we’ll have a better read on what to look for.