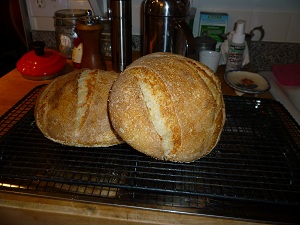 I just have time this morning to get off one more post before Christmas, although it’s a close call. I’ve got family coming over at mid-day for the first of two holiday gatherings and, because I’m an inveterate baker, I have sourdough bread to attend to. Sourdough (or as my guru Peter Reinhart likes to call it, ‘wild yeast bread’) appeals to me because of its slow rhythms, multiple builds and lengthy rise times, and I’ve enjoyed cultivating local yeasts for both a white and rye starter that I use constantly. Sometimes breadmaking is a wonderful change of pace from keyboarding — you put the mind in neutral for a while and start kneading a mass of dough, a wonderfully Zen-like experience.

The story I wrote this morning is below, but let me take this chance to wish all of you a happy holiday! Centauri Dreams relies on a reader base that has been active and engaged from the start, and I’ve found my thoughts on interstellar issues challenged, shaped and stimulated by our continuing discussions. Looking back, it’s been over six years and 2,000 posts (this is actually the 2,023rd) since I began this site, thinking to turn it into nothing more than a personal database to keep up with news on interstellar issues. It’s now become a career of its own, and I owe that to its readership.

And now to business, and the fortunes of the curious object known as (596) Scheila, long thought to be an asteroid but now showing distinct cometary symptoms. Discovered in 1906, Scheila is out of the ecliptic plane and was, in fact, mistakenly identified as a new comet by Steve Larson, senior staff scientist with the Catalina Sky Survey. Long-time Centauri Dreams readers know that the CSS is all about searching for potentially hazardous asteroids, which is what Larson was doing when he ran across the mutable object. The comet identification seemed a natural, says Larson:

“Its brightness of a total magnitude of 13.4 visual, which is about 900 times fainter than the faintest star you can see in a clear, dark sky, led me to suspect that it was a known comet, but I checked the comet database and got nothing.”

Once identified as an asteroid, Scheila was found in the CSS archives, revealing a December 3 image that showed a slightly diffuse object, but not quite the distinctly cometary bright core with faint tail that Larson saw eight days later. Scheila has been analyzed before and found to be made of carbonaceous material left over from the earliest days of the Solar System. Is Scheila, then, an extinct comet that has somehow come back to life? Sorting that out demands the closer look now being given, to determine whether that ‘tail’ is made up of cometary gas and ice or simply dust associated with a collision with another asteroid. Results so far are inconclusive. 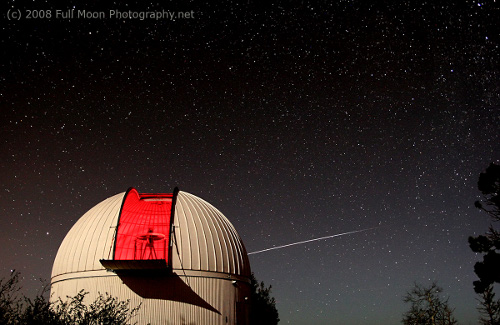 Image: The International Space Station is a streak behind the CSS’ 60” dome operated by Steward Observatory (University of Arizona) in the Catalina Mountains north of Tucson. Credit: CSS/UA/Full Moon Photography.

An asteroid collision is interesting, to be sure, but a comet would stand out, as Larson notes:

“Most asteroids are collision fragments from larger asteroids and display a range of mineral composition. But a fraction are thought to be former comets whose volatile ices have been driven off by the sun. If the activity in Scheila proves to be cometary in nature, this will be only the sixth known main-belt comet, and about 100 times larger than previously identified main belt comets.”

Meanwhile, it’s reassuring to know that the Catalina Sky Survey, with telescopes in Arizona and Australia, is out there doing its job. CSS says that it is discovering 70 percent of the near-Earth objects that might pose a threat. Remember the background: A 1998 congressional directive instructed NASA to identify objects 1 kilometer and larger to an estimated confidence level of 90 percent or better. In June of 2006, that mandate was extended to include 140-meter or larger bodies at the same confidence level. The CSS works with the separate Mt. Lemmon and Siding Springs Surveys — all three operating under the name of the Catalina Sky Survey — to sustain the investigation.