The near-Earth asteroid 1999 AT10 is telling us a greal deal about an object much further away, the main belt asteroid Vesta. And that, in turn, is giving us new information about planet formation more than 4.5 billion years ago, when our Solar System was forming. The recently published paper, which precedes the August arrival of the Dawn spacecraft at Vesta, draws on infrared studies of 1999 TA10 by researchers from the Max Planck Institute for Solar System Research and the University of North Dakota, using the Infrared Telescope Facility on Mauna Kea.

The recent research compares the infrared radiation from the near-Earth asteroid to the spectral signature of Vesta. The latter, 525 kilometers in diameter, is quite an interesting object. It’s associated with a type of meteorite called HEDs — Howardite-Eucrite-Diogenite — which are thought to have originated in Vesta’s crust, traveling to Earth as the result of a huge impact that has left a crater on the asteroid’s southern hemisphere. Some of these meteorites (and about 5 percent of all falls are HEDs) have rock similar to what is found in Vesta’s mantle, but 1999 TA10 is the first near-Earth ‘Vestoid’ to have been found that matches Vesta’s mantle composition.

A mission backgrounder published in Acta Astronautica (reference below) notes the significance of the HED meteorites to the overall Dawn mission:

Comparison of reﬂectance spectra suggests that achondritic meteorites known as HEDs (for their principal constituents of howardite, eucrite, and diogenite, all of which are magmatic rocks that form at high temperatures) are fragments of Vesta. Conﬁrmation of this important possibility would lend great weight to the use of laboratory studies of HED meteorites to contribute to the development of a description of Vesta’s structure and evolution. Discovering the geological context for the HED meteorites is, thus, a key objective for Dawn. 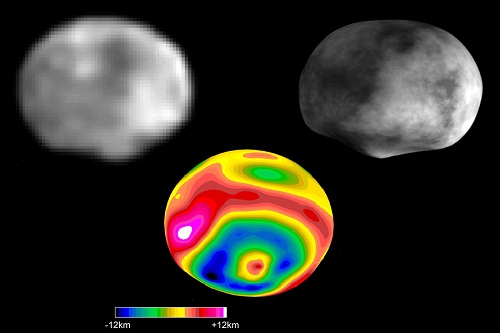 Image: On its southern side the asteroid Vesta shows a huge crater. This picture shows the asteroid in an image taken by the Hubble Space Telescope (top, left), as a reconstruction based on theoretical calculations (top, right), and as a topological map (bottom). Image: Ben Zellner (Georgia Southern University) / Peter Thomas (Cornell University) / NASA

The researchers believe, then, that the near-Earth object comes not from the outer rocky crust of Vesta but from deeper layers inside. With Dawn on the way, it should be possible to determine the thickness of Vesta’s crust and study its internal structure. The work has implications for planet formation, for Vesta has a differentiated inner structure, with a crust of cooled lava over a rocky mantle and an iron/nickel core. The similarity of this structure to terrestrial planets like Earth and Mars leads to the supposition that Vesta is a protoplanet, a still surviving relic of the ancient age when our system was beginning to come together.

The infrared studies found calcium-rich wollastonite and iron-rich ferrosillite, a fact whose significance is explained by Andreas Nathues (Max Planck Institute for Solar System Research), who notes that 1999 AT10 has a much lower concentration of iron than other Vestoids:

‘‘These materials can be found in Vesta’s mantle and crust. However, the ratio is decisive. This all points to 1999 TA10 having originated from the interior of Vesta.”

The crater at Vesta’s south pole is believed to be about 25 kilometers deep, which the new work suggests would be the maximum thickness of the outer crust. Understanding the thickness of the respective layers of Vesta’s geology should help us calculate the materials from which the protoplanet was formed, and by implication tell us about the kind of materials present when the entire Solar System emerged, and their relative ratios. Dawn’s visit to the remnant protoplanet will allow us to consider our hypotheses at length, for the spacecraft is scheduled to orbit Vesta for an entire year before moving on to Ceres.