AAS: Rocky Exoplanet and a ‘Voorwerp’

We’re exoplanet-minded around here, and any news from Kepler or CoRoT almost automatically goes to the top of the queue, but there are days when the visuals take precedence. Such was the case yesterday, when even as we learned about a small, rocky planet in Kepler’s view, we also received the image below, released at the American Astronomical Society’s 217th meeting. It’s Hanny’s Voorwerp, named for Hanny van Arkel, the Dutch teacher who discovered the celestial anomaly in 2007 while working with the Galaxy Zoo project. Here it’s seen through the Hubble Space Telescope’s Wide Field Camera 3 and Advanced Camera for Surveys, and what an image it is. 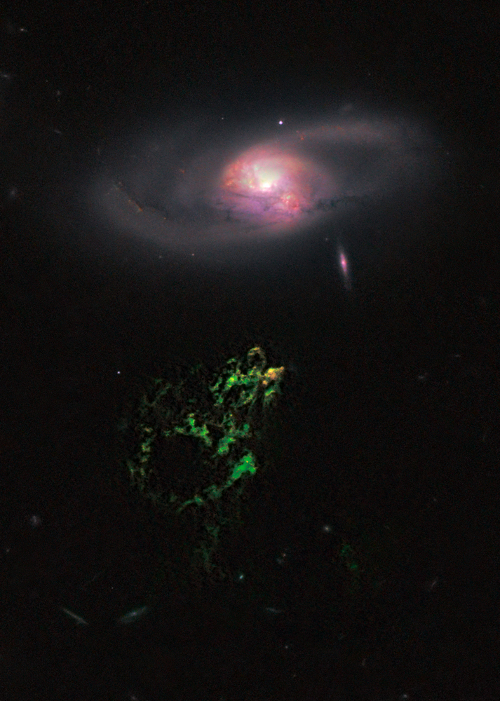 Image: This bizarre object, dubbed Hanny’s Voorwerp (Hanny’s Object in Dutch), is the only visible part of a 300,000-light-year-long streamer of gas stretching around the galaxy, called IC 2497. The greenish Voorwerp is visible because a searchlight beam of light from the galaxy’s core illuminated it. This beam came from a quasar, a bright, energetic object that is powered by a black hole. The quasar may have turned off about 200,000 years ago. Credit: NASA, ESA, W. Keel (University of Alabama), and the Galaxy Zoo Team.

This green, gaseous blob floating in space near a spiral galaxy looks for all the world like the cover of a science fiction magazine — I can almost imagine a couple of story titles and a publication name superimposed over the image. What are we looking at? Evidently the nearby galaxy (IC 2497) produced a quasar that sent a beam of light in the direction of the object — the bright green color comes from glowing oxygen. What makes the image so remarkable is that the quasar itself evidently turned off in the ‘recent’ past, within 200,000 years or so, so Hanny’s Voorwerp displays for us the quasar’s afterglow, along with now visible signs of star birth in the galaxy-facing region.

“This quasar may have been active for a few million years, which perhaps indicates that quasars blink on and off on timescales of millions of years, not the 100 million years that theory had suggested.”

Adding to the eerie quality of the photograph is that while Hanny’s Voorwerp seems to be an island of gas floating in space, it’s now known through radio studies that it is part of a long, twisting rope of gas, a 300,000 light-year long tidal tail that wraps around the galaxy, with only the Voorwerp itself being optically visible. All this points to a billion-year old galactic disruption in IC 2497, which is about 650 million light years from Earth. A possible culprit is a galactic merger, which would have expelled gas from the galaxy while simultaneously funneling gas and stars into a central black hole, which would have powered up the quasar.

A feast of ideas and imagery inevitably marks each AAS meeting, which makes following the proceedings on Twitter (search for #AAS217) a lively pastime, and one that can become a fixation as the tweets pick up their pace. The action was fast and furious yesterday not only as William Keel’s session on Hanny’s Voorwerp approached, but also when the Kepler mission confirmed the discovery of a small rocky planet, Kepler 10-b. We’re starting to see the emphasis on small planets pay off, as this latest find is said to measure roughly 1.4 times the size of Earth.

But we’re still not talking about a planet in the habitable zone, for Kepler 10-b orbits its star at a distance some 20 times closer than Mercury is to our Sun, with an orbital period of 0.84 days. Because high frequency variations in the star’s brightness caused by stellar oscillations (‘starquakes’) can be readily detected on this bright star, its properties are under active study and help to tell us more about the new planet. Scientists believe that it’s a rocky world with a mass 4.6 times that of Earth, with an average density of 8.8 grams per cubic centimeter. That points to a higher metal content than Earth, and a composition of solid silicate and metal grains.

A Science News story quotes Diana Valencia (Observatoire de la Côte d’Azur) as saying “I would call it a rocky planet, and I would say it is more like a super-Mercury” than a super-Earth. With temperatures hot enough to melt iron, the star-facing side of the planet is likely covered with seas of lava.

For all the good news that the discovery represents — and it’s a heartening sign that Kepler is on course to find those rocky planets in the habitable zone that so many believe are out there in abundance — Kepler 10-b is not, as is being widely reported, the smallest planet ever discovered outside our Solar System. That honor goes to PSR B1257+12A, a ‘pulsar planet’ some 980 light years away in the constellation Virgo. That object is about twice as massive as our own Moon, a small planet indeed, but the same pulsar has yielded an even smaller candidate, PSR B1257+12 D, which is more or less the size of a Kuiper Belt object in our own Solar System.

True, pulsar planets circle stellar remnants and are obviously well off the main sequence, but they do give us interesting confirmation of the ubiquity of planetary systems. Meanwhile, the hunt for small, rocky worlds with climates far more moderate than Kepler 10-b continues.