Inclined Orbits and Their Causes

The abundance of giant planets among the more than 500 exoplanets thus far identified is largely the result of our detection methods — we can find larger planets far more readily than smaller ones. But even as we bring our detections down to ever more Earth-sized worlds, we can go to work on the questions that giant planets close to their star raise. Current thinking is that planets like these must have formed far from their host stars and migrated to their current locations. Still to be determined are the mechanisms at work to make migration happen.

Intriguing new evidence is coming in from the National Astronomical Observatory of Japan, which has been working with data from the Subaru Telescope to study the orbital characteristics of two exoplanets, HAT-P-11 b and XO-4 b. The former, about 130 light years from Earth in the constellation Cygnus, shows a mass of 0.081 that of Jupiter, making it a Neptune-sized world in an eccentric 4.89-day orbit. The latter is a Jupiter-class planet of about 1.3 Jupiter masses, with a circular orbit of 4.13 days. What’s intriguing about both is that their orbits are highly tilted.

We’re talking about the angle between the axis of a star’s rotation and the planetary orbital axis, and herein lies a tale. To study such angles, we rely on the Rossiter-McLaughlin effect, which relates to radial velocity irregularities of an exoplanet as observed during a planetary transit. Have a look at the diagram below and marvel as I do at the amount of information we’re able to tease out of these signals, all of which involve planets that have never been directly imaged. 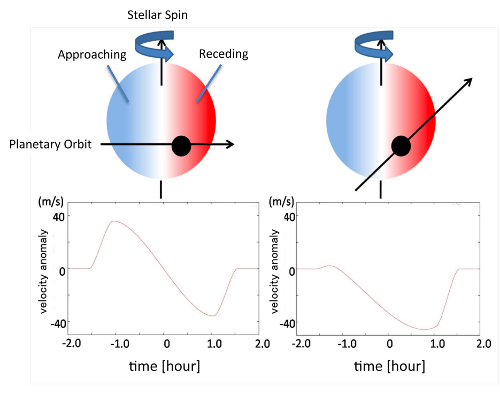 Image: Because of stellar rotation called “spin”, the stellar surface or “disk” has two parts: the approaching side (blue) and the receding side (red). During a planetary passage or “transit”, the observed radial velocity (RV) or speed of the star exhibits an apparent irregularity because of the stellar spin. When the transiting planet blocks the approaching side of the disk (blue), the star appears to be receding, and the RV shows an apparent red-shift. When the transiting planet conceals the receding side of the stellar disk, the star appears to be approaching, and the RV exhibits an apparent blue-shift. These anomalous RV shifts occur along the trajectory of the planet relative to the stellar disk. The diagram shows two different trajectories. The left panels indicate alignment between the stellar spin axis and the planetary orbital axis while the right panels show misalignment of the two axes by 50 degrees. Therefore, precise measurements of RVs during a planetary transit enable an estimation of the angle between the two axes. Credit: NAOJ.

As you can see in the second image (below), HAT-P-11 b’s orbit is highly inclined compared to the star’s rotational axis. The Rossiter-McLaughlin effect has been investigated for approximately 35 exoplanetary systems and seems to be a reliable indicator of orbital inclination. The recent NAOJ findings take Rossiter-McLaughlin to a new level by detecting the effect using one of the smaller exoplanets known. It’s challenging work given that the signal of the RM effect is proportional to the size of the planet. In HAT-P-11 b’s case, that makes for a faint signal indeed. 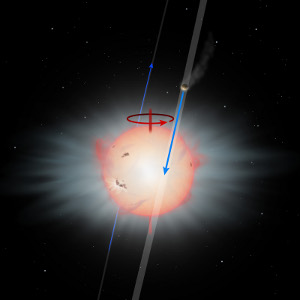 But back to the planetary formation model. As we learn of more systems with inclined planetary orbits, the evidence is pointing to planet-planet models of migration. One such scenario is called Kozai migration. Here the gravitational interactions between an inner giant planet and another massive object in the system can alter the planet’s orbit and push it closer to its star. The Kozai mechanism, first developed by Japanese astronomer Yoshihide Kozai in relation to asteroid orbits, can produced the kind of inclined orbits we see in these results, as can models based on giant planets forcing mutual scattering as they are formed within the protoplanetary disk.

Image: Illustration of the HAT-P-11 System Based on Observations from Subaru Telescope. The planet orbits the star in a highly inclined orbit. Credit: NAOJ.

What doesn’t seem to work as well, given the number of systems with inclined planetary orbits, is a model of disk-to-planet interaction as the cause of migration. Here we can create a scenario where the planet falls toward the central star, but these models predict that the spin axis of the star and the orbital axis of the planet will be in substantial alignment. The Rossiter-McLaughlin effect can’t tell us whether planet-planet scattering or Kozai migration is at work in a given system, but by developing a large sample of RM data, we should eventually be able to perform statistical analyses to draw conclusions about which model is the most plausible.

Next post: A Bracing Look at the Unseen Universe