Another comet looms, but first, some sail news. If everything went well, NanoSail-D opened its sail at 0255 UTC this morning, and indeed @NanoSailD in a tweet not long after the supposed deployment time said the satellite had sent data confirming the sail was open. We’re now waiting for ground-based tracking to confirm the fact, so patience is in order. Meanwhile, reports from hams tracking the satellite’s beacon on 437.270 MHz are still welcome and should be sent to the NanoSail-D2 Mission Dashboard. Henk Hamoen (PA3GUO) in the Netherlands put together the video below showing his tracking of NanoSail-D. The sail should be visible once deployed — check Heavens Above for visible pass predictions (thanks to @MarkGStacey for the tip).

Later: This from an MSFC news release:

Friday, Jan. 21 at 10 a.m. EST, engineers at NASA’s Marshall Space Flight Center in Huntsville, Ala., confirmed that the NanoSail-D nanosatellite deployed its 100-square-foot polymer sail in low-Earth orbit and is operating as planned. Actual deployment occurred on Jan. 20 at 10 p.m. EST and was confirmed today with beacon packets data received from NanoSail-D and additional ground-based satellite tracking assets. In addition, the NanoSail-D orbital parameter data set shows an appropriate change which is consistent with sail deployment.

But today’s other mission news involves a more distant object, and a cometary rendezvous scheduled for Valentine’s Day. The target is a familiar one, comet Tempel 1, to which the Deep Impact spacecraft delivered an impactor back in July of 2005. This time the spacecraft is the same Stardust vehicle that collected cometary particles from comet Wild 2 in 2004, along with samples of interstellar dust. After the dust collection (and subsequent return of samples to Earth in 2006 via a capsule that ejected from the spacecraft), controllers changed the craft’s trajectory. The mission was subsequently re-named Stardust-NExT and Tempel 1 became the target.

Tim Larson is project manager for the mission at JPL, and he’s understandably proud of the spacecraft’s performance in its different roles:

“You could say our spacecraft is a seasoned veteran of cometary campaigns. It’s been half-way to Jupiter, executed picture-perfect flybys of an asteroid and a comet, collected cometary material for return to Earth, then headed back out into the void again, where we asked it to go head-to-head with a second comet nucleus.” 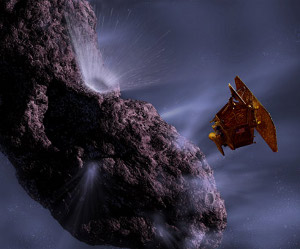 It’s an interesting comet, too, given that this is the first time we’ll be able to look at the changes to a comet’s surface that have accumulated after an orbit around the Sun. Data on the material being emitted into the coma, its distribution and composition, should offer us useful information about Jupiter-family comets and their growth. The latter are short-period comets with periods of less than twenty years and aphelia that reach as far as the vicinity of Jupiter’s orbit. Jupiter family comets tend to have longer active lifetimes than long period comets, many of them surviving up to 1000 revolutions before the volatiles in their nuclei evaporate away.

Image: An artist’s impression of Tempel 1 and the Deep Impact spacecraft in 2005. Deep Impact sent a 370-kg impactor into the comet in July of that year, but the resulting dust obscured its view of the newly formed crater. Credit: NASA/JPL/UMD/Pat Rawlings.

It will be fascinating to see whether the high-resolution images that should come from this encounter will include the crater created by the Deep Impact collision, which was obscured by dust after the 2005 impact. 72 images are scheduled in all, with raw imagery sent back to Earth for processing on February 15. The current plan is for the images to be made available within hours. Stardust-NExT, having made eight flight path correction maneuvers and one Earth gravity assist since 2007, will fly past Tempel 1 at a distance of roughly 200 kilometers.

With twelve years of space travel (and four circuits of the Sun since the beginning of the Tempel 1 mission alone), Stardust-NExT has logged almost six billion kilometers since its 1999 launch. We’ve gotten our money out of this one, and Tempel 1 should be its last destination, for the spacecraft is nearly out of fuel. The spacecraft is already imaging Tempel 1 to create the data needed to update predictions of the comet’s trajectory. In just 24 days, we’ll be able to see the comet up close (again), and will be able to measure the dust properties of a second comet with the same instrument used on the Wild 2 dust measurements. As we’ve seen before, re-purposing a spacecraft gives us a low-cost way to stretch our technology in the form of a useful extended mission.