After yesterday’s meditation on the Voyager spacecraft and their significance in the larger canvas of space exploration, it’s worth recalling that we have just celebrated Voyager 2’s encounter with Uranus — this month marks the 25th anniversary of the event. If your memories of the encounter are fuzzy, you might recall the other major news driver that January, the explosion of the Space Shuttle Challenger, which drove Uranus results off the front page. The national psyche was riveted by Challenger, and understandably so, but what a shame to see analysis of the Voyager flyby all but lost in the coverage of an event so much closer to home. 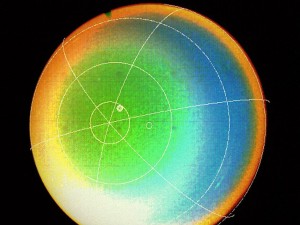 Voyager 2’s closest approach took place on January 24, 1986. I remember it because I was getting ready for a weekend flight training session in Frederick, Maryland and hoping I wouldn’t miss the subsequent release of Voyager imagery and data. In those days, the small company I was flying for did clinics for the Aircraft Owners and Pilots Association, and if memory serves, this was a weekend when the weather cooperated, with relatively high ceilings and no icing issues. I remember working with students on instrument approaches in the West Virginia mountains the day Challenger blew up (the 28th), trying to concentrate on the job at hand instead of speculating about what could have caused the disaster.

Image: A latitude-longitude grid superimposed on this Voyager 2 false color image shows that Uranus’ atmosphere circulates in the same direction as the planet rotates. Credit: NASA/JPL.

I also remember how hard it was to get Voyager news that night on the television. Only much later would I find out how unusual the results had been, especially the discovery that the magnetic north and south poles on the planet weren’t aligned with Uranus’ rotation at all, but were close to the equator. Moreover, the Uranian poles were more or less the same temperature despite the fact that one would be in sunlight for decades while the other was not. Remember, this is a planet with an almost 90-degree axial tilt, probably the result of a collision early in its life with another large body.

Keeping both poles at the same temperature suggests an unusual heat transport mechanism, but so much about Uranus was strange, including tiny Miranda, which had been expected to be cratered and ancient, but turned out to be filled with valleys and ridges and breathtaking cliffs, indicators of tectonic and thermal activity. There was even some speculation that the moon might be a re-aggregation of material following earlier destruction in a massive impact. Voyager also gave us the first imagery of the Uranian rings and their small shepherding moons.

All these Uranus memories remind me that New Horizons, our Pluto/Charon mission, will cross the orbit of Uranus on March 18. So how is our other deep system mission going now that the Voyagers are pushing at the boundaries of the heliosphere? The New Horizons team is celebrating the fifth anniversary of launch, which occurred on January 19, 2006 on an afternoon when clouds cleared just in time for the event. That one was a bit frustrating, too — I remember trying to get launch coverage from NASA TV and finding that the local cable company had inserted a replay of a city council meeting from earlier in the week in place of NASA, with no explanation or apology. Coverage on the Net was available but plagued by bandwidth issues.

Even so, the news coming back from various other Net sources was all reassuring, and the flawless launch has been followed by an exceptionally trouble-free cruise thus far. New Horizons has needed fewer trajectory correction maneuvers than had been anticipated, according to this news release from the JHU/APL site. As of this morning at about 1335 UTC, the mission is at 2,969,429,304 kilometers from Earth, with a light delay of 2 hours 45 minutes. The Planetary Society has published a report by Ted Stryk from the New Horizons science team meeting, held last week at NASA Ames, from which we learn that the spacecraft is awakened from hibernation once a year to test its instruments and conduct science. 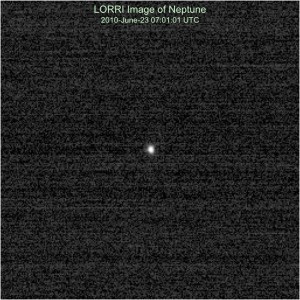 Stryk recounts some of the interesting science that has flowed from this:

Over the past few years, LORRI, the high resolution camera on New Horizons, has been making observations from its unique vantage in the outer solar system. It has obtained light curves of Pluto, Uranus, Neptune, Triton, and Makemake, and the data to construct light curves have been obtained for several other Kuiper belt objects. RALPH and MVIC, other cameras aboard New Horizons, have also been studying Uranus and Neptune. ALICE, which studies ultraviolet light, is making observations of the interplanetary medium, and the fields and particles instruments are now being used even during hibernation, with their data stored for downlink after wakeup. The limiting factor on cruise science is the fact that New Horizons cannot transmit data as fast as it used to because of its increasing distance from the Sun. Presently, the data rate is down to 3 kilobits per second.

Image (above): The New Horizons Long Range Reconnaissance Imager (LORRI) observed Neptune on June 23, 2010 as part of a test of the critical optical navigation Annual Checkout (ACO)-4. In this 100-millisecond exposure, taken when the spacecraft was 23.2 astronomical units (about 2.15 billion miles) from Neptune, the planet appears slightly larger than a star. At the time of this observation, the solar phase angle (the spacecraft-planet-Sun angle) was 34 degrees and the solar elongation angle (planet-spacecraft -Sun angle) was 95 degrees. Only New Horizons can observe Neptune at such large solar phase angles, which can be used to study the light-scattering properties of Neptune’s atmosphere. Credit: NASA/Johns Hopkins University Applied Physics Laboratory/Southwest Research Institute.

We continue to reap the benefit of New Horizons’ flight through the Jupiter system, which provided not only exceptional imagery but useful data on Jupiter’s magnetotail, all of which resulted in six papers on the magnetotail thus far. Science team co-investigator Fran Bagenal says the New Horizons work at Jupiter “provoked a new way of looking at solar wind interaction with the Jovian magnetosphere.” So things have not exactly been quiet during the cruise to the edge of the Solar System, particularly during the Jupiter encounter, and remember that after the Pluto/Charon flyby, we still have interesting possibilities re observing Kuiper Belt objects. Let’s hope the results can be analyzed in an atmosphere less disaster-laden than the Challenger winter of 1986.