Good News from Both Sail Missions 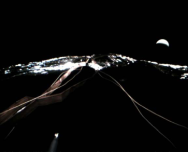 Good fortune continues to smile on Japan’s IKAROS solar sail. First of all, we can point to the image at left, a small shot to be sure but an amazing one nonetheless. Emily Lakdawalla explains on the Planetary Society’s blog that IKAROS’ transmitter is not powerful, so that it took a full two weeks to transmit the image from the spacecraft to Earth, and at that, it’s just a thumbnail. But take a look — what you see is the sail itself and, in the background, Venus. Think about it: A solar sail has successfully made an interplanetary crossing.

Yesterday the JAXA controllers behind the IKAROS mission confirmed that its first six months of life have been all but flawless, and the mission has been extended to March of 2012. This includes the deployment of its 20-meter diagonal, 0.0075 milimeter thick polyimide sail — you may remember that was a bit of a nail-biter from here because I was trying to translate tweets in Japanese and follow the incoming imagery, which at one point seemed to show a snarled cable. But that turned out to be a mis-reading, and full sail deployment was subsequently confirmed.

Almost as significant as actual deployment, though, was the success of the attitude control system JAXA built into the sail, which includes liquid crystal devices that can be turned on and off to vary the reflectivity of the sail, and thus creates changes in photon pressure for maneuvering. During the subsequent cruise operations on the way to Venus, IKAROS collected information on space dust and was used for very long baseline interferometry observations of deep sky objects. Up next: A suite of navigational studies, including varying the sail’s angle to the Sun and changing trajectory, maneuvers that will model the sail’s response for future missions.

The success of IKAROS to this point bodes well for the next major Japanese sail attempt, which will involve a sail ten times the size of this one paired with an ion propulsion unit on a mission to Jupiter. Launch is currently planned for 2019 or 2020, and this article in Science notes that there are plans to operate in conjunction with US and European missions to conduct joint observations of the giant planet. IKAROS mission manager Osamu Mori is looking ahead: “In half a year, we accomplished all the mission objectives. Now we’ve set new objectives.”

Meanwhile, NASA’s NanoSail-D is 650 kilometers up, having unfurled its own 10-meter square sail. Unlike IKAROS, NanoSail-D’s mission is much closer to home, according to principal investigator Dean Alhorn (NASA MSFC):

“Our mission is to circle Earth and investigate the possibility of using solar sails as a tool to de-orbit old satellites and space junk,” explains Alhorn. “As the sail orbits our planet, it skims the top of our atmosphere and experiences aerodynamic drag. Eventually, this brings it down.”

Atmospheric drag will indeed return NanoSail-D to Earth, where it will burn up in the atmosphere in 70 to 120 days. What’s ahead are useful observations measuring the effect of sunlight on the sail. It’s possible that atmospheric drag will mask the effect, but just how the orbit decays will help to answer that question. NanoSail-D may be the harbinger for future ‘drag sails’ that de-orbit satellites after their missions are over, a necessity given the amount of orbital debris building up around the Earth. But a successful sail deployment also gives hope to those who believe a robust future lies ahead for solar sailing as a way to move payloads around the inner system. 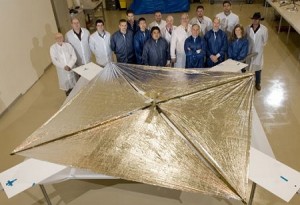 For those with an interest in seeing NanoSail-D, bear in mind that the sail is quite reflective. If Venus appears to us at an apparent magnitude of -5 at its brightest and the full Moon hits magnitude -13, NanoSail-D should be able to show up at -10, a substantial target when sunlight glints off the sail. A new contest encourages amateur photographers and astronomers to submit photos of the sail to help NASA monitor the condition of the spacecraft. A series of cash prizes are offered, with contest rules and a submission link at the site.

Image: The NanoSail-D team after a deployment test. Credit: NASA/MSFC.

Remember, too, that the NanoSail-D mission dashboard is here, while you can track satellite flybys at the spaceweather.com site. The contest has already begun and will end when the spacecraft re-enters the atmosphere in three months or so. So have some fun with NanoSail-D while it’s up there, and let’s hope that both it and IKAROS are joined soon by another solar sail in the form of the Planetary Society’s LightSail-1. The solar sail era is coming upon us, slowly but surely, and the advantages of leaving propellant behind will one day make these technologies indispensable.