What was it that left such an interesting infrared signature in Jupiter’s atmosphere on July 19, 2009? The images below, made with a wide variety of instruments, show what appears to be the debris of an object that collided with the planet. The event was first noted by amateur astronomer Anthony Wesley in Australia, who tipped off an international team of scientists that went on to combine data from three infrared telescopes to study the impact, looking at atmospheric temperatures and the chemical signatures of the debris. The conclusion: The object was most likely an asteroid. 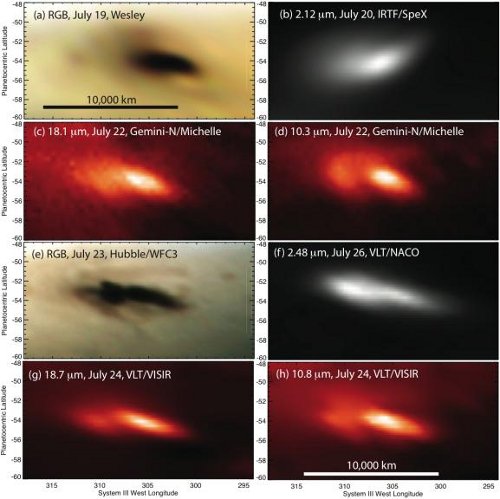 Image (click to enlarge): Eight different looks at the aftermath of a body — probably an asteroid — hitting Jupiter on July 19, 2009. Amateur astronomer Anthony Wesley was the first to capture an image of the impact, with a visible-light camera attached to his telescope in Australia. A NASA Hubble Space Telescope image was obtained in visible light. Infrared images were obtained by NASA’s Infrared Telescope Facility and the Gemini North Telescope, both atop Mauna Kea, Hawaii, and the European Southern Observatory’s Very Large Telescope in Chile. The images were taken between July 19 and 26, 2009. Credit: NASA/JPL-Caltech/IRTF/STScI/ESO/Gemini Observatory/AURA/A. Wesley.

The results, reported in two papers in Icarus, show that the impact debris in 2009 was denser than debris from comet Shoemaker-Levy 9, which broke apart and impacted Jupiter in 1994. Jupiter is getting to be a lively place now that we have so many eyes on it — remember the two impacts in the summer of 2010 — but the 2009 event is proving useful indeed, given the amount of data available and the fact that the evidence points to an asteroid impact. Until recently, icy ‘Jupiter-family’ comets were the only objects thought likely to strike Jupiter.

So is the giant planet unable to clear its orbit completely when it comes to small objects like asteroids? Perhaps so. In any case, the asteroid signature seems strong. Here’s Leigh Fletcher (Oxford University) on the matter:

“Comparisons between the 2009 images and the Shoemaker-Levy 9 results are beginning to show intriguing differences between the kinds of objects that hit Jupiter. The dark debris, the heated atmosphere and upwelling of ammonia were similar for this impact and Shoemaker-Levy, but the debris plume in this case didn’t reach such high altitudes, didn’t heat the high stratosphere, and contained signatures for hydrocarbons, silicates and silicas that weren’t seen before. The presence of hydrocarbons, and the absence of carbon monoxide, provide strong evidence for a water-depleted impactor in 2009.”

A cometary nucleus would have been unlikely to have penetrated as far into the Jovian atmosphere as this impactor, and the detection of silica in the debris firms up the idea that we’re dealing with a strong rocky body that exploded deep in the clouds. Going under the assumption that the object had a density of around 2.5 grams per cubic centimeter, the researchers calculate its diameter at 200 to 500 meters. An object called 2005 TS100, though not the impactor in this event, has made several close approaches to Jupiter in computer models, demonstrating a chaotic orbit of the kind that could have brought this object into contact with the planet.

JPL points out in this news release that asteroids of this size hit the Earth about once every 100,000 years, but we don’t have a good idea what the frequency of asteroid strikes on Jupiter is. But the diversity of objects hitting the giant planet seems to be raising eyebrows. Paul Chodas works at NASA’s Near-Earth Object Program Office at JPL:

“We weren’t expecting to find that an asteroid was the likely culprit in this impact, but we’ve now learned Jupiter is getting hit by a diversity of objects. Asteroid impacts on Jupiter were thought to be quite rare compared to impacts from the so-called ‘Jupiter-family comets,’ but now it seems there may be a significant population of asteroids in this category.”

The 200 trillion trillion ergs of energy (the equivalent of 5 gigatons of TNT) released in this event not only created a channel of super-heated atmospheric gases and debris but also launched debris back above the cloud tops that splashed down a second time into the atmosphere, dredging up gases like ammonia from the troposphere and heating the lower stratosphere by as much as 4 degrees Kelvin, a significant amount of energy given the area affected. As we continue to learn, the outer Solar System can be a violent place, and it’s heartening to see amateur astronomy feeding professional follow-ups that help us learn more about it.