Last June Centauri Dreams readers were excited about the release of Kepler results, but miffed that so much of the most interesting material was held back for later release. Now we have the release of these data, and the first thing I want to do is direct you to Greg Laughlin’s systemic site, where you can find a follow-up characterization flow chart to help work through systems of interest. Laughlin calls it a ‘template for the treasure map,’ and it’s available in full here.

What happens next? Laughlin (UC-Santa Cruz) notes the process: “Once the candidates hit the stands, there will be a rush to skim the cream, and a mobilization of follow-up observational campaigns to capitalize on the best opportunities in the data set.” He also reminds us that the brighter the parent star, the better the chances for delving deep into its exoplanetary mysteries. We’re in cream skimming time indeed, and we’ll have plenty to talk about in coming weeks. We’ll carry on tomorrow with thoughts on the 54 new planet candidates found in the habitable zone (five of these are near Earth-sized). 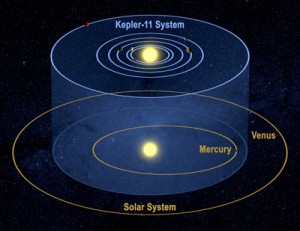 For today, though, I want to focus on the unusual case of Kepler-11, a system that contains no fewer than six planets orbiting a Sun-like star. Ponder this: Before the new discovery, we had determined both the size and mass for only three exoplanets smaller than Neptune. Now, in a single planetary system, we have added five more, all in tightly packed orbits around the primary. There is a sixth planet as well, though its mass remains undetermined.

Image: This diagram compares the orbits of the six planets in the Kepler-11 system with the orbits of Mercury and Venus. Credit: NASA/Tim Pyle.

The five inner planets in this system range from 2.3 to 13.5 times the mass of Earth. All have orbital periods of less than fifty days, meaning they would fit inside the orbit of Mercury within our own Solar System. The sixth planet has an orbital period of 118 days and, as noted above, we have no data on its mass. All six of these worlds have densities lower than the Earth’s. Jonathan Fortney (UC-Santa Cruz) led the work on the structure and composition of the planets:

“It looks like the inner two could be mostly water, with possibly a thin skin of hydrogen-helium gas on top, like mini-Neptunes,” Fortney said. “The ones farther out have densities less than water, which seems to indicate significant hydrogen-helium atmospheres. … These planets are pretty hot because of their close orbits, and the hotter it is the more gravity you need to keep the atmosphere. My students and I are still working on this, but our thoughts are that all these planets probably started with more massive hydrogen-helium atmospheres, and we see the remnants of those atmospheres on the ones farther out. The ones closer in have probably lost most of it.”

Finding six planets around the same star allows us to make advances in the burgeoning study of comparative planetology, and Kepler-11 seems to hold clues to planetary formation. Because stellar disks should lose their hydrogen and helium gas within about five million years, the assumption here is that the numerous small planets with hydrogen/helium atmospheres must have formed quickly. Moreover, their crowded location near the parent star suggests planetary migration, with at least some of the planets forming further out and spiraling inward over time.

Let’s back out for a moment to the wider picture, because we’re seeing in this work a useful new way to figure out the masses of exoplanets. What Kepler does is to detect the periodic dips in brightness as planets pass in front of their host stars, the size of the dip allowing a determination of the planet’s radius. The planet’s orbital period can be found by measuring the time between transits. Finding a planet’s mass, in the case of Kepler-11, was done by analyzing variations in the orbital periods caused by the gravitational interactions between the planets.

“The timing of the transits is not perfectly periodic, and that is the signature of the planets gravitationally interacting. By developing a model of the orbital dynamics, we worked out the masses of the planets and verified that the system can be stable on long time scales of millions of years.”

Bear in mind that ground-based Doppler spectroscopy, which is normally used to confirm a transiting planet and determine its mass, could not be used here because of the small size of the planets involved and the distance of the star, some 2000 light years from Earth. Because Kepler is looking for small planets around relatively distant stars, orbital dynamics becomes the method of choice, and we can expect the same method to be used on many of Kepler’s discoveries. Fabrycky noted that the sixth Kepler-11 planet is too far separated from the other five to allow the orbital perturbation method to work. Thus we have no determination of its mass.

Six planets all orbiting in the same plane, showing the conservation of the disk pattern in the system from which they formed, is a scenario reflecting what we see in our own Solar System, though we have no other real comparisons between this system and ours. Kepler-11 is a fascinating find, one of many we’ll have the chance to talk about as Kepler results are sifted and the cream is skimmed. I’m out of the office most of the day, but I’ll have the citation for the Nature paper on this work up as soon as I can.