The data from Kepler’s first 136 days of operation could not be more interesting. As discussed in yesterday’s news conference, we now have fully 1235 exoplanet candidates from Kepler’s transit observations, and it’s worth quoting principal investigator William Borucki (NASA Ames) on the significance of the results thus far:

Statistical analysis by the Kepler team shows that between 80 and 90 percent of these candidates are likely to be real planets. Remember that the spacecraft is staring at 156,453 stars in a patch covering 1/400th of the sky, located in the constellations Cygnus and Lyra. What it’s giving us is a statistical sample of stars in a particular part of the Milky Way, one we can use to extrapolate planetary populations throughout the galaxy. In a helpful post, Franck Marchis (UC-Berkeley) lays out the properties of these planets classified by size:

The numbers are useful as well as deeply exciting, because they suggest how vast the exoplanet population must be on the galactic scale. Kepler is seeing only the small fraction of planets whose orbital alignment as seen from Earth causes them to transit their hosts stars. Roger Hunter, Kepler project manager, sums up what many had long suspected but lacked evidence for until now: “It’s looking like the galaxy may be littered with many planets.” 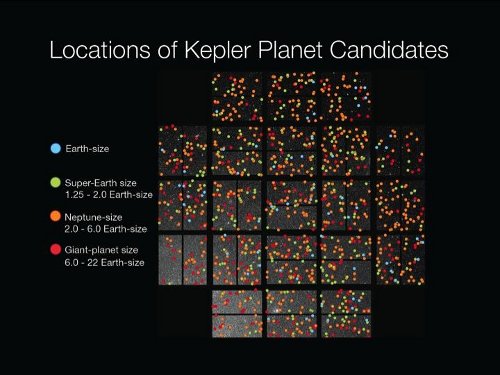 One of the questioners at yesterday’s news conference asked Douglas Hudgins, a Kepler program scientist, whether buried within the latest data release the project’s ‘holy grail’ might be lurking; i.e., a planet in the habitable zone of a star like the Sun. We do see planets in the habitable zone of certain stars from Kepler’s work, but Hudgins had to point out that the true ‘grail’ Kepler was after was a planet similar enough to Earth that it would be found in a roughly one-year orbit around a star like ours, and squarely in the habitable zone. We haven’t yet had enough time for such an observation to be made, since it would take more than one transit to reveal such a recurring event.

So right now we’re talking about planets in the habitable zone of stars that are cooler and smaller than the Sun, places where the star in the sky would be a lot redder than the Sun as seen from Earth. The next data releases will get more and more intriguing on that score as we home in on true Earth-analogs. At that point Kepler’s statistics really will be giving us a glimpse of the likelihood of the kind of planets we could live on and how common they are in the galaxy. As the overall catalog grows, it will become more accurate and should reveal not just exoplanets orbiting at larger distances from their host stars but very possibly moons around some of them.

We’re also getting a better read on just how skewed our early exoplanet results were toward large planets, particularly the so-called ‘hot Jupiters.’ That was an inevitable result of picking off planets that were the easiest to detect, but Kepler is now showing us that stars in our galaxy are more likely to be orbited by smaller worlds. Let me quote Marchis on this:

…we can now say that stars in our Milky Way galaxy are more likely to host small exoplanets since 75% of the Kepler catalog exoplanets are smaller than Neptune, with a peak of exoplanets only 2-3 times larger than Earth.

Using model predictions which take into account the probability of having the correct geometry to detect these exoplanets, the Kepler team extrapolated that 6% of the stars in our Milky way have Earth- and super-Earth size exoplanets, 17% of them have Neptune-size candidates and only 4% of them have Jupiter-size exoplanets. 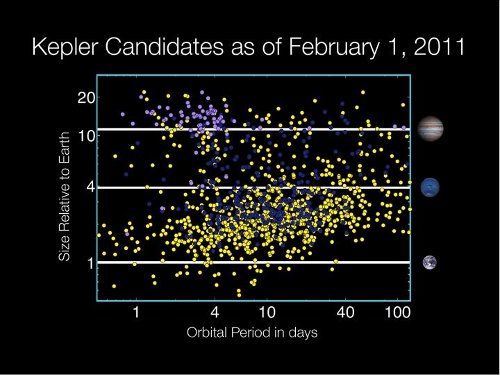 Why so comparatively few multi-planet systems (about 170 thus far)? Considering the short period of time Kepler has been in operation, we’re working with fairly short orbital periods. That’s one thing that makes Kepler-11, discussed here yesterday, so unusual. Given that we’re talking about orbits close to the parent star, it’s astounding to find a star with five planets crammed inside the orbital distance of Mercury, and a sixth at a distance between Mercury and Venus around our Sun. The five inner planets have orbital periods varying between a scant 10 to 47 days around this G-class star, and from all the indications we have, the system is dynamically stable.

Bringing the Hunt Back to Earth

Where would we have gone next in our exoplanet hunt if money were no object? The Space Interferometry Mission immediately comes to mind, because while Kepler could give us a statistical look at a particular patch of sky, SIM would have targeted nearby stars, giving us detections via interferometry of Earth-like worlds within thirty light years. Without SIM or, for that matter, Terrestrial Planet Finder, we’re finding other ways of locating such worlds from Earth’s surface. Ground-based surveys like MEarth and new technologies like laser frequency combs may help us fill out our target lists for the upcoming James Webb Space Telescope.

Lee Billings looks at these technologies in a fine new article in Nature. Take Steven Vogt and colleagues, who have built the Automated Planet Finder (APF), a robotic telescope paired with a powerful spectrometer at Lick Observatory in California. Like MEarth, APF targets short period planets around nearby stars, and that includes the brightest M-dwarfs in the sky. One way to save money while still hunting exoplanets is to maximize observing time. Billings quotes Vogt:

“The coin of the realm is observing nights,” he says. “It’s not new technology; it’s not laser combs or some newfangled near-infrared spectrometers that can take advantage of M-dwarfs. Take $50 million, which is chump change in the NASA regime, build a 6–8-metre telescope with enough light-gathering power to reach a large fraction of the nearest M-dwarfs, put a nice spectrometer on it and dedicate it to this work every single night of the year. You’d have these planets pouring out of the sky.”

And maybe there’s a cheaper way in space, too, as revealed in Sara Seager’s ExoplanetSat program. Seager (MIT) has the notion of entire fleets of tiny CubeSats, dozens at a time scanning individual stars, each satellite with its own particular target. Planets around nearby Sun-like stars should be detectable if they transit, and Billings says we should see a functional prototype as early as 2012, with subsequent satellites launching for as little as $250K apiece. So there are ways to proceed beyond Kepler, and they’ll surely be in full gear even as the Kepler data continue to arrive and the planets we discover begin more and more to resemble our own.

Next post: Sails, Abandoned Concepts, and the Long Haul