Back in December, NASA published its report on the Europa Jupiter System Mission (EJSM), noting how mission goals that were separately developed by NASA itself and the European Space Agency have now melded into a unified strategy. We’re looking at orbiters around two of Jupiter’s moons, a NASA vehicle around Europa and an ESA orbiter around the other Jovian ‘water world,’ Ganymede. The December report explained the derivation of each mission: 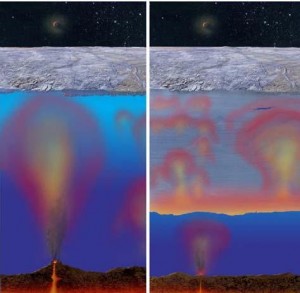 The Europa Jupiter System Mission (EJSM) would be an international mission with an architecture of two independently launched and operated flight elements. Its theme and goals are derived from the US National Research Council’s Planetary Science Decadal Survey [SSB 2003] and the ESA Cosmic Vision document [ESA 2005]. These reports emphasize as key questions for solar system exploration: 1) the origin and evolution of habitable worlds, and 2) processes operating within the solar system.

Image: The NASA Jupiter Europa Orbiter would address the fundamental issue of whether Europa’s ice shell is ~few km (left) or >30 km (right), with different implications for processes and habitability. In either case, the ocean is in direct contact with the rocky mantle below, which can infuse the chemical nutrients necessary for life. Credit: NASA/ESA.

ESA’s own report on the EJSM is being presented to the European public this month, making the case for journeys to two icy moons that have long captured the imagination. Both Ganymede and Europa are thought to have sub-surface oceans, Europa’s covered with what may be a relatively thin shell that presents a dynamic surface, one that captures its history on the ice in the form of movements of ice ‘rafts’ and upwellings from the liquid below. One task of the EJSM will be to identify possible landing sights for future craft, but onboard instruments including ice-penetrating radar should also tell us much about the extent of the water under the ice. Unlike Ganymede, Europa’s ocean is thought to be in contact with the rocky mantle below. 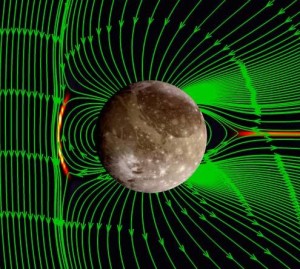 Ganymede, on the other hand, is believed to feature a thicker ice shell, its ocean trapped between ice above and below. The contrast between the internal structures of these two worlds should make for fascinating observation, and we’ll also learn about the magnetic field that sets Ganymede apart from other Solar System moons. The plan is for both orbiters to study Io and Callisto as well, adding to our knowledge of the Jovian system and potentially contributing to our understanding of gas giants around other stars. Between the two craft, we would have 21 complementary instruments to map Jupiter’s interactions with its largest moons.

Image: The ESA Jupiter Ganymede Orbiter would determine how Ganymede’s unique magnetic field interacts with Jupiter’s, how the interactions vary with time, and the role of a convecting core and internal ocean. Credit: NASA/ESA.

Will the Europa Jupiter System Mission ever fly? We’ll see. NASA and ESA gave it proposal priority status in 2009 as the most feasible of the outer system flagship missions being considered, but ahead we have the next Planetary Science Decadal Survey, which will define the roadmap for NASA planetary missions starting in 2013. The joint strategy with ESA is under continuing study on both sides of the Atlantic, so we’ll need to keep a watchful eye on EJSM as the mission concept is refined.