Seeing Into the Jovian Clouds

Adaptive optics changes everything for ground-based telescopes, removing the worst of the distortion caused by a changeable atmosphere and allowing astronomers to see objects with a clarity akin to a space-based platform. But the recent adaptive optics work at the Keck II telescope in Hawaii really put the technology to the test. Normally, astronomers use a laser to create an artificial ‘star’ that computers can monitor, using information about atmospheric conditions and distortions to adjust the telescope up to 2000 times per second.

But if Jupiter is your target, you’ve got a problem. The giant planet is bright enough to obscure the laser ‘star,’ meaning you need a guide star that is brighter still and close to Jupiter to do the work. Europa turned out to be the target of choice, positioned perfectly on November 30, 2010 to allow the adaptive optics system to work and to allow the capture of the image below. What you’re seeing is Jupiter in infrared light at a wavelength of nearly 5 microns, with that image overlaid on a composite image of three shorter, near infrared bands at 1.21, 1.58 and 1.65 microns. 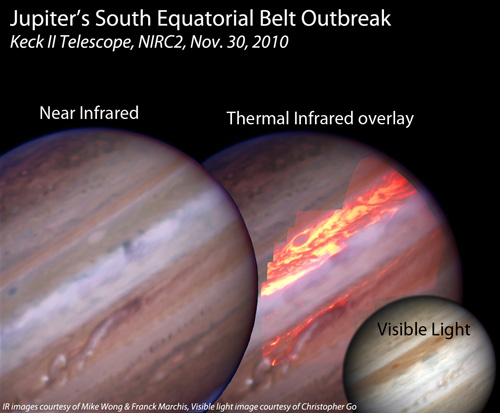 The goal of the Europa-assisted study is to examine what’s happening in Jupiter’s re-emerging South Equatorial Belt (SEB), just south of the planet’s equator. The belt had begun to fade last spring and turned white, a recurring phenomenon apparently resulting from developing clouds of white ammonia ice that obscure the view of the lower brown clouds. When winds that keep the region clear of the ice clouds die down, the SEB seems to merge with surrounding white bands, and as the cloud deck later clears, the darker material returns to view, a re-emergence that Keck is now studying.

It’s a long and complicated process, according to Mike Wong (UC-Berkeley):

“The thermal IR senses breaks in the cloud cover. We see wispy cloud-free regions at 5 microns in the SEB, But they are much less extensive than the near-infrared dark regions surrounding them. The data show that the change from zone-like to belt-like appearance is a complex process that takes place at different speeds in each layer of Jupiter’s atmosphere.”

What the astronomers are doing, then, is to study heat from Jupiter’s interior as it is radiated into space — this is picked up in the thermal infrared data — while contrasting it with the three other IR bands, all of which show reflected sunlight. The composite result shows evidence for a thinning layer of high, icy clouds that have obscured the South Equatorial Belt for the past year. These are the highest resolution SEB images we have in the 5 micron band — no other telescopes have matched it — making this a striking success for Keck II’s adaptive optics ploy with Europa.

Related: Carrie Anderson and Robert Samuelson (NASA GSFC) have used the composite infrared spectrometer aboard Cassini to reveal the presence of thin clouds of ice particles on Titan that are similar to Earth’s cirrus clouds. In sharp contrast to Titan’s brown haze, the ice clouds are white and located higher in the atmosphere than the methane and ethane clouds found elsewhere on Titan. “They are very tenuous and very easy to miss,” says Anderson, the paper’s lead author. “The only earlier hints that they existed were faint glimpses that NASA’s Voyager 1 spacecraft caught as it flew by Titan in 1980.” More in this NASA news release.