Protoplanetary disks present huge challenges, but we need to learn more about them to make sense of our exoplanet catalog. We’re interested in learning about the two primary theories of planet formation — core accretion from colliding bodies of rock or ice and gravitational instability in the disks themselves. But protoplanetary disks are dim compared to their central star, and our studies thus far have been more or less limited to the outer envelope of the disk structure.

What that means is that we’re looking at a scale that’s much larger than our own Solar System, not sufficient for the kind of detailed observation we’d like to make. Fortunately, we have technologies like coronagraphs, that can mask the bright light of the central star, and adaptive optics that can compensate for the blurring effects of the Earth’s atmosphere. Now we have new images from the Subaru telescope in Hawaii, which is using advanced versions of both technologies in an instrument called HiCIAO (High Contrast Instrument for the Subaru Next Generation Adaptive Optics). And our view of protoplanetary disks is becoming a bit sharper.

Consider the very young star AB Aur in the constellation Auriga, which now yields the sharpest image of a disk ever taken. You can see the result in the images below: 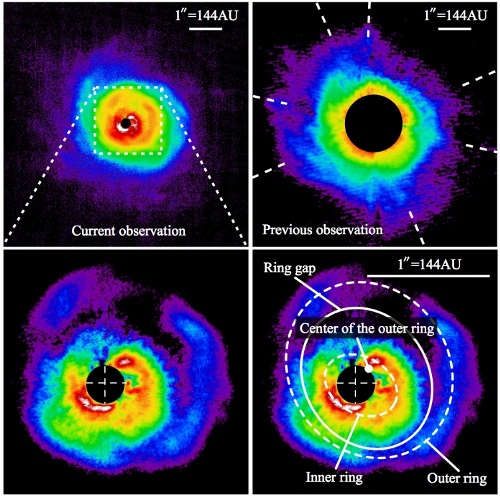 Here we’re looking at a developing system that is only about a million years old, located some 460 light years from Earth. The details visible in the HiCIAO images show fine details of the disk’s inner structure that are on a scale similar to Neptune’s orbit in our own Solar System. The bottom two images show close-ups of the inner disk and reveal its irregularities — note that the centers of the visible double rings do not coincide with the position of the central star. Researchers believe these irregularities point to the existence of a giant planet that is not visible because it is obscured within the disk materials themselves.

The second star under examination is LkCa 15, several million years old and roughly as massive as the Sun. The Subaru work provides the first direct imaging of a gap in the protoplanetary disk here, as shown in the following image. Again we’re looking at features on a scale similar to Neptune’s orbit, seeing a lack of material near the central star that is evidently the result of a giant planet sweeping up leftover materials from early planetary formation. 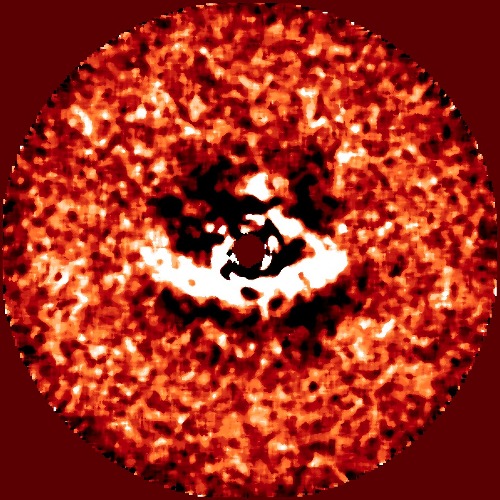 Image: High-contrast near-infrared imaging of LkCa 15 disk. The central star is hidden by the dark brown area toward the center. The inner edge of the outer disk is visible. The white feature below the blocked out area is part of the disk illuminated by the central star. The opposite side of the disk is not readily visible. There is a gap between the inner boundary of the disk and the star, at a distance of about 50 AU (Astronomical Unit, the distance between the Earth and the Sun, about 150 million kilometers or 94 million miles. Credit: Subaru Telescope/SEEDS Collaboration.

The Subaru work, which is part of the SEEDS (Strategic Explorations of Exoplanets and Disks with Subaru) Project, gives us a glimpse of the advances we’re making in direct imaging of these tricky targets. The imagery of both stars is strongly suggestive of the presence of Jupiter-class planets that are affecting the structure of the disks, yielding the useful fact that within a scant million years, giant planets can be well along the way to formation.