Our view of the Solar System has changed utterly in the last fifty years. Mention that at a cocktail party and your listener will assume you’re talking about Pluto, the demotion of which has stirred more response than any other recent planetary news. But in addition to all we’ve learned through our spacecraft, our view of the Solar System has gone from a small number of orbiting planets to huge numbers of objects at vast distances. Fifty years ago, a Kuiper Belt many times more massive than the main asteroid belt was only theory. And the early Solar System models I grew up with never included any representation of a vast cloud of comets all the way out to 50,000 AU.

We’ve also begun to learn that liquid water, once thought confined to the Earth, may be plentiful throughout the system. Caleb Scharf goes to work on this in a recent post in Life Unbounded, noting what our models are telling us about internal oceans on a variety of objects:

Much can be done with purely theoretical models that seek to determine the appropriate hydrostatic balance between an object’s own gravity and its internal pressure forces – be they from gaseous, liquid, or solid states of matter. Thermal energy from formation, and critically from radiogenic heating (radioactive decay of natural isotopes), all play a role. Throw in a few actual datapoints, measurements of places like Europa or Titan, and these models get much better calibrated. The intriguing thing is that one can play around with compositions and the internal layering of material in a planet-like body to find the best looking fit. As a consequence the nature and extent of any subsurface zones of liquid water can be estimated.

The numbers get to be striking, as Hauke Hussmann and colleagues show in a 2006 paper in Icarus. Start with Galileo, the mission to Jupiter that brought home how much we needed to modify our view of the giant planet’s moons. Galileo discovered secondary induced magnetic fields in the vicinity of Europa, Callisto and Ganymede, offering strong observational evidence for subsurface oceans on all three. The fields are thought to be generated by ions contained in the liquid water layer underneath the icy outer shells. Europa has, of course, become a prime target for future study re astrobiology thanks to the prospect of water combined with a possibly thin ice layer.

The Hussmann paper goes on to calculate interior structure models for medium-sized icy bodies in the outer Solar System, assuming thermal equilibrium between radiogenic heat produced by the core and the loss of heat through the ice shell. Now we really start expanding the picture: The paper shows that subsurface oceans are feasible not just on the now obvious case of Europa, but also on Rhea, Titania, Oberon, Triton and Pluto. A case can also be made for the Trans-Neptunian Objects 2003 UB313 , Sedna and 2004 DW. And note this:

For the bodies discussed here, the liquid layers are in direct contact with the rocky cores. This contrasts with subsurface oceans inside the large icy satellites like Ganymede, Callisto, or Titan, where they are enclosed between ice-I at the top and high-pressure ice layers at the bottom. The silicate–water contact would allow the highly efficient exchange of minerals and salts between the rocks and the ocean in the interiors of those medium-sized satellites. 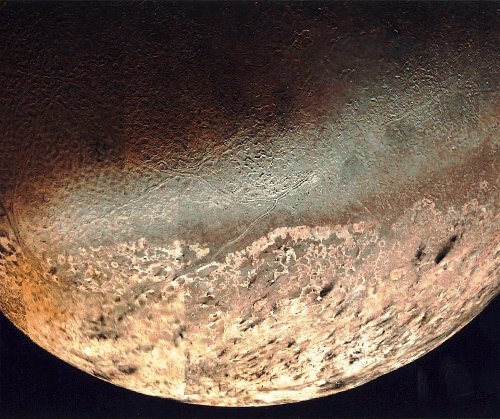 Interestingly, given the continued examination of the moon by the Cassini spacecraft, Enceladus does not fit the Hussmann model, the paper noting that sources other than radiogenic heating would be required to sustain such an ocean, the obvious option being tidal heating. We have much to learn about Enceladus (and the paper goes into issues regarding the orbital history of the moon, and the comparison between it and Mimas, where tidal forces are much stronger). But the upshot is clear: We need more observations to confirm whether subsurface oceans are not a common phenomenon in our system’s moons and icy bodies like Trans-Neptunian Objects.

Oceans in the Outer Dark

Hussmann and colleagues assume that subsurface reservoirs on these outer worlds are located beneath a thick ice shell of more than 100 kilometers in thickness — thick enough, in fact, that there is little link between internal oceans and surface features. But study of the interaction between these internal oceans and the surrounding magnetic fields and charged particles, and the response of the objects to tides exerted by the primary, may help us to confirm whether the oceans exist. There’s work here for generations of spacecraft, but get the model right early on and we can make reasonable extrapolations about water’s ubiquity.

The paper’s model, say its authors, is not applicable to Ganymede, Callisto and Titan, but I see that Scharf’s article cites Titan as having possibly ten times the volume of Earth’s oceans in water. This is lively stuff. Quoting Scharf: “…from these bodies alone there could readily be 10 to 16 times more liquid water slurping around off-Earth than on it.” Then factor in those Trans-Neptunian Objects, add the prospect of radiogenic heating, and you wind up with at least the possibility that TNOs could be the largest source of liquid water in the entire Solar System.

Did I say our view of the Solar System has changed? This revolution continues as we push into the Kuiper Belt. New Horizons, it’s hoped, will locate a small Trans-Neptunian Object for study at some point during its journey past Pluto/Charon, but eventually we can hope for the kind of instrumentation around outer planet satellites and other objects that will help us understand their internal composition. If the prospect of internal water bears out on the kind of scales mentioned above, then we have astrobiological potential, even if faint, all the way into the Kuiper Belt.

Next post: A Gas Giant in the Oort Cloud?