Fukushima: Reactors and the Public

All weekend long, as the dreadful news and heart-wrenching images from Japan kept coming in, I wondered how press coverage of the nuclear reactor situation would be handled. The temptation seemed irresistible to play the story for drama and maximum fear, citing catastrophic meltdowns, invoking Chernobyl and even Hiroshima, along with dire predictions about the future of nuclear power. My first thought was that the Japanese reactors were going to have the opposite effect than many in the media suppose. By showing that nuclear plants can survive so massive an event, they’ll demonstrate that nuclear power remains a viable option.

This is an important issue for the Centauri Dreams readership not just in terms of how we produce energy for use here on Earth, but because nuclear reactors are very much in play in our thinking about future deep space missions. Thus the public perception of nuclear reactors counts, and I probably don’t have to remind any of you that when the Cassini orbiter was launched toward Saturn, it was with the background of protest directed at its three radioisotope thermoelectric generators (RTGs) that use plutonium-238 to generate electricity. A similar RTG-carrying mission will doubtless meet the same kind of response.

What the public thinks about nuclear power, then, has a bearing on how we proceed both on Earth and in space. So how are the media doing so far with what is happening in Japan? Josef Oehmen, an MIT research scientist, has some thoughts on the matter. In an essay published yesterday by Jason Morgan, an English teacher and earthquake survivor who blogs from Japan, Oehmen gives us his initial reaction:

I have been reading every news release on the incident since the earthquake. There has not been one single (!) report that was accurate and free of errors (and part of that problem is also a weakness in the Japanese crisis communication). By “not free of errors” I do not refer to tendentious anti-nuclear journalism – that is quite normal these days. By “not free of errors” I mean blatant errors regarding physics and natural law, as well as gross misinterpretation of facts, due to an obvious lack of fundamental and basic understanding of the way nuclear reactors are built and operated. I have read a 3 page report on CNN where every single paragraph contained an error.

Reactor Basics and the Fukushima Story

What to do? Oehmen proceeds to go through the basics about nuclear reactors and in particular those at Fukushima, which use uranium oxide as nuclear fuel in so-called Boiling Water Reactors. Here the process is straightforward: The nuclear fuel heats water to create steam, which in turn drives turbines that create electricity, after which the steam is cooled and condensed back into water that can now be returned for heating by the nuclear fuel. Oehmen’s article, which I recommend highly, walks us through the containment system at these plants. 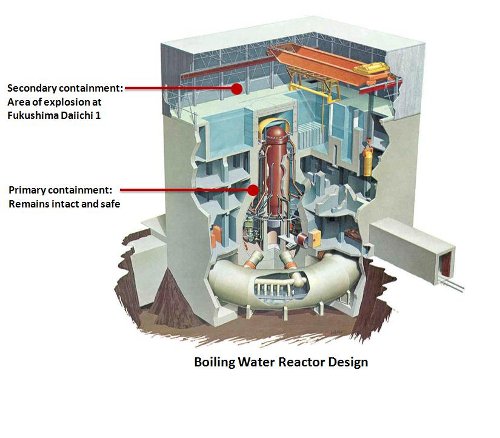 The scientist also makes an obvious point that some in the media should probably take note of. We are not talking about possible nuclear explosions here of the kind that happen when we detonate a nuclear device. For that matter, we’re not talking about a Chernobyl event — the latter was the result of pressure build-up, a hydrogen explosion and, as Oehmen shows, the rupture of the containments within the plant, which drove molten core material into the local area. That’s the equivalent of what’s known as a ‘dirty bomb,’ and the main point of Oehmen’s article is that it’s not happening now in the Japanese reactors and it is not going to happen later.

I won’t go through the entire Fukushima situation here, but instead will send you directly to Oehmen’s essay, which was also reproduced on the BraveNewClimate site with a series of illustrations. But a few salient points: When the earthquake hit, the nuclear reactors went into automatic shutdown, with control rods inserted into the core and the nuclear chain reaction of the uranium stopped. The cooling system to carry away residual heat was knocked out by the tsunami, which destroyed the emergency diesel power generators, kicking in the battery backups, which finally failed when external power generators could not be connected.

This is the stage at which people began to talk about a core meltdown. Here is Oehmen on that scenario:

The plant came close to a core meltdown. Here is the worst-case scenario that was avoided: If the seawater could not have been used for treatment, the operators would have continued to vent the water steam to avoid pressure buildup. The third containment would then have been completely sealed to allow the core meltdown to happen without releasing radioactive material. After the meltdown, there would have been a waiting period for the intermediate radioactive materials to decay inside the reactor, and all radioactive particles to settle on a surface inside the containment. The cooling system would have been restored eventually, and the molten core cooled to a manageable temperature. The containment would have been cleaned up on the inside. Then a messy job of removing the molten core from the containment would have begun, packing the (now solid again) fuel bit by bit into transportation containers to be shipped to processing plants. Depending on the damage, the block of the plant would then either be repaired or dismantled.

So much for mushroom clouds over Fukushima. Oehmen’s article refers primarily to the Daiichi-1 reactor, but what is happening at Daiichi-3 seems to parallel the first reactor. He goes on to walk through the after-effects of all this, including the not inconsiderable issue that Japan will experience a prolonged power shortage, with as many as half of the country’s nuclear reactors needing inspection and the nation’s power generating capacity reduced by 15 percent. As to the effect of radiation in the environment:

Some radiation was released when the pressure vessel was vented. All radioactive isotopes from the activated steam have gone (decayed). A very small amount of Cesium was released, as well as Iodine. If you were sitting on top of the plants’ chimney when they were venting, you should probably give up smoking to return to your former life expectancy. The Cesium and Iodine isotopes were carried out to the sea and will never be seen again.

I don’t want to minimize the effect of any of this (and I certainly don’t want to play down the pain, both physical and psychological, of the brave people of Japan), but at a time when terror over nuclear operations seems to be running rampant, it’s important that a more balanced view come to the fore in the media. In a message a few minutes ago (about 1330 UTC), Jason Morgan told me that the Oehmen essay would be posted soon on the MIT website, so I’ll link to that as soon as it goes up. Do read what Oehmen has to say as a counterbalance to the sensationalism that seems to follow nuclear issues whenever they appear, and help us keep a sane outlook on a very sad situation.

Addendum: MIT has now published a modified version of the Oehmen essay.