MESSENGER’s Day in the Sun

We rarely talk about the inner planets here, and even Mars gets short shrift. That’s because I decided at the outset that because there were so many excellent sites covering planetary exploration — and especially Mars — my only focus within our Solar System would be on the outer planets and, of course, what lies beyond them. But the MESSENGER mission is simply too fascinating to ignore, the first mission to Mercury since Mariner 10 way back in 1974, and beyond that, one of its project scientists is a man I deeply respect, Ralph McNutt (JHU/APL), who in addition to his MESSENGER duties also serves as one of the consultants for the Project Icarus starship design.

In fact, McNutt’s work in regions both near and far from the Sun is voluminous. For MESSENGER, he will be analyzing the planet’s surface composition using data from the spacecraft’s X-Ray Spectrometer and Gamma-Ray and Neutron Spectrometer instruments. But he’s also a co-investigator for the New Horizons mission to Pluto/Charon, works with the Cassini team on the Ion Neutral Mass Spectrometer investigation, acts as a science team member for the Voyager probes, and is actively involved in interstellar probe design, as witness his work on the Innovative Interstellar Explorer mission, a near-term precursor probe to 200 AU. 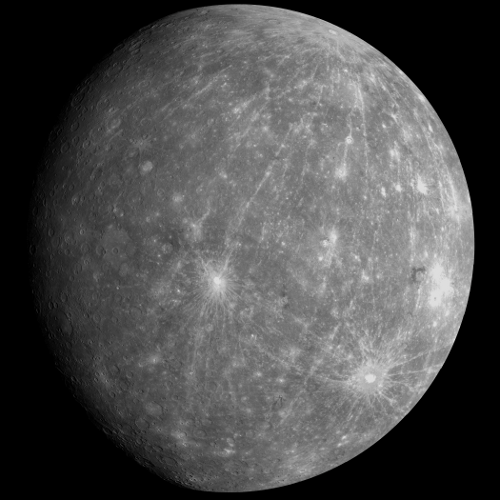 Image: This high-resolution mosaic of NAC images shows Mercury as it appeared to MESSENGER as the spacecraft departed the planet after the mission’s second flyby of Mercury. This mosaic resembles one of the first images received back at Earth following that flyby, an image that showed for the first time the spectacular rays of Hokusai crater extending great distances across Mercury’s surface. Credit: NASA/Johns Hopkins University Applied Physics Laboratory/Carnegie Institution of Washington.

MESSENGER is set to achieve Mercury orbit after a 4.7 billion mile trip that has included fully fifteen trips around the Sun and six planetary flybys. Orbital insertion should be around 0100 UTC on the 18th, marking the first time a spacecraft has orbited the planet. It’s been a long journey not only in miles but in time since MESSENGER launched more than six and a half years ago. Ahead is a year-long science mission as MESSENGER orbits the barren world in an orbit that closes to within 200 kilometers of the planet’s surface. Says APL’s Eric Finnegan:

“For the first two weeks of orbit, we’ll be focused on ensuring that the spacecraft systems are all working well in Mercury’s harsh thermal environment. Starting on March 23 the instruments will be turned on and checked out, and on April 4 the science phase of the mission will begin and the first orbital science data from Mercury will be returned.”

Remember that Mariner 10’s images of Mercury’s surface were made during three flyby maneuvers in 1974 and 1975, but the spacecraft could only send us pictures of one side of the planet. MESSENGER has been filling in the gaps through its own flybys, and now we’ll complete the picture. What’s exciting isn’t just the thrill of making a full study of a little-examined world, but knowing that the more we learn about the geological history, surface composition and other salient facts about Mercury, the more we learn about rocky planets in general, knowledge which we’ll apply as we try to make sense out of the smaller worlds we find around other stars.

Coping with heat will be a major issue for this mission, which is why the spacecraft’s instruments are shielded against the reflection from the planet’s surface. Thermal issues have consequences for the spacecraft’s orbit as well, says Ann Sprague (University of Arizona):

“The spacecraft is going to go very fast, traveling around the planet every 12 hours. The orbit is highly elliptical to allow the spacecraft to cool down. We couldn’t do this with a circular orbit, like around Mars. Everything would just overheat. MESSENGER must swoop in, keeping its sunshade pointed toward the Sun, and then it has to swing out far into space so it can cool down.”

We have much to learn, including the question of whether frozen water may be found beneath dust layers in the permanently shadowed crater bottoms at the poles, the nature of the planet’s exosphere (a thin region of atoms and ions generated by charged particles from the solar wind striking the surface and interacting with elements there), and the question of Mercury’s magnetic field. The planet is small enough (not much larger than the Moon) that it should have solidifed to the core, as this UA news release points out. But the presence of a magnetic field tells us that there may be molten material inside, generating a field MESSENGER will examine closely.

All of this reminds me that Mariner 10’s Mercury travels had ramifications in unexpected ways. Flaking paint from the spacecraft’s high-gain antenna caused problems with its navigation sensors and a disturbed star tracker caused the spacecraft to roll, venting critical attitude control gas. The control team at the Jet Propulsion Laboratory was able to use Mariner 10’s solar panels to adjust the spacecraft’s attitude, an early and striking demonstration of the power of solar photons. These days we’re just entering the era of the solar sail, but it’s worth recalling that the concept was demonstrated much earlier, and in this case, in entirely unanticipated ways.