Rains have come to the equatorial regions of Titan, a vivid marker of the changing seasons on the distant Saturnian moon. A large storm system appeared in the equatorial regions in late September of last year as spring came to the low latitudes, and extensive clouds followed in October. When they dissipated, the Cassini orbiter was able to capture surface changes in a 500,000 square kilometer region along the southern boundary of the Belet dune field, along with smaller areas nearby, all of which had become darker. The likely cause: Methane rain.

Tony Del Genio (Goddard Institute for Space Sciences) is a member of the Cassini imaging team:

“These outbreaks may be the Titan equivalent of what creates Earth’s tropical rainforest climates,” says Del Genio, “even though the delayed reaction to the change of seasons and the apparently sudden shift is more reminiscent of Earth’s behavior over the tropical oceans than over tropical land areas.”

That’s an interesting take on these observations, because on Earth we find tropical bands of rain clouds year round in equatorial regions. On Titan, the evidence so far is telling us that extensive bands of clouds may occur in the tropics only during the equinoxes, bringing rain to what had been equatorial deserts. In fact, we’ve seen years of dry weather in the Titanian tropics, but now Cassini is showing us an area the size of Arizona and New Mexico combined that shows clear signs of saturation through a presumed methane rainfall that lasted several weeks. 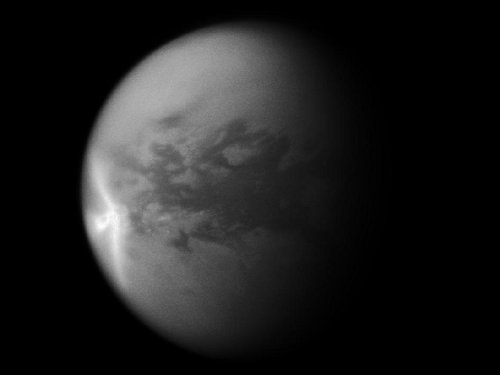 Image: A huge arrow-shaped storm blows across the equatorial region of Titan in this image from NASA’s Cassini spacecraft, chronicling the seasonal weather changes on Saturn’s largest moon. This storm created large effects in the form of dark — likely wet — areas on the surface of the moon, visible in later images. After this storm dissipated, Cassini observed significant changes on Titan’s surface at the southern boundary of the dune field named Belet. The part of the storm that is visible here measures 1,200 kilometers (750 miles) in length east-to-west. The wings of the storm that trail off to the northwest and southwest from the easternmost point of the storm are each 1,500 kilometers (930 miles) long. Credit: NASA/JPL/SSI.

The changes in Titan’s weather over time are strikingly well defined. During the moon’s late southern summer back in 2004, major cloud systems were associated with its south polar region. The clouds seen in the 2010 imagery of the equatorial regions appeared one year after the August, 2009 equinox, when the Sun moved directly over the equator. The suggestion in this new work on Cassini data, which appears in Science, is that the global atmospheric circulation here is influenced both by the atmosphere and the surface, with the temperature of the surface responding more rapidly to changes in illumination than the thick atmosphere.

Thus we see Titan reacting to a change of seasons, though in delayed fashion, with an abrupt shift in cloud patterns that is reminiscent of what happens on Earth over tropical oceans rather than tropical land areas. Given these observations, the dry channels Cassini has seen in Titan’s low latitudes are likely caused by seasonal rainfall rather than being the remnants of a past, wetter era on the moon. Until this point in the Cassini mission, we had seen liquid hydrocarbons like methane and ethane only in the polar lakes of Titan, while the dunes of the equatorial regions were arid. Says Elizabeth Turtle (JHU/APL), lead author of the paper on this work:

“It’s amazing to be watching such familiar activity as rainstorms and seasonal changes in weather patterns on a distant, icy satellite. These observations are helping us to understand how Titan works as a system, as well as similar processes on our own planet.”

Next post: Extraterrestrial Life: The Need for an Answer