Pedal to the Metal

We have a long way to go before we can get a probe to another star in the space of a human lifetime. The figure always cited here is the heliocentric speed of Voyager 1, some 17.05 kilometers per second, which is faster than any of our outward bound spacecraft but would take well over 70,000 years to reach Alpha Centauri, assuming Voyager 1 were pointed in that direction. New Horizons is currently making 15.73 kilometers per second on its way to a Pluto/Charon flyby in July of 2015, impressive but not the kind of speed that would get us to interstellar probe territory.

Interestingly, the fastest spacecraft ever built weren’t headed out of the Solar System at all, but in toward the Sun. The Helios probes were West German vehicles launched by NASA, one in 1974, the other in 1976, producing successful missions to study conditions close to the Sun for a period of over ten years. The orbits of these two craft were highly elliptical, and at closest approach to the Sun, each reached speeds in the range of 70 kilometers per second. Helios II, marginally faster, lays claim to being the fastest man-made object in history. 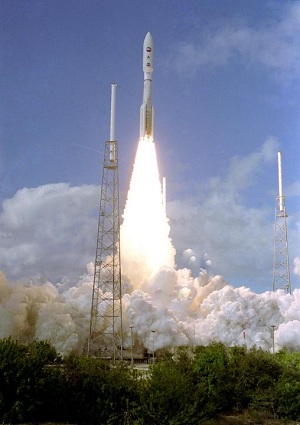 It’s fun to juggle these numbers even as we think about how far we have to go before an interstellar probe becomes a possibility. If the goal is to reach Alpha Centauri with a mission lasting, say, forty years, then we need a tenth of lightspeed, or roughly 30,000 kilometers per second. That makes .10c a figure of distinction, because it creates a mission that can be built, flown and studied to completion by the same team. I’ve long argued that the goal of missions that could be completed within the lifetime of a researcher is one we’ll ultimately have to ignore, because for a time our deep probes beyond the system are going to take a much longer time than that. But get us to a tenth of c and that goal becomes possible, at least in terms of Centauri A and B.

Image: Smoke and steam fill the launch pad in January of 2006 as New Horizons roars into the blue sky aboard an Atlas V rocket. No craft ever had a faster Earth escape velocity, but the fastest spacecraft now exiting our Solar System is Voyager 1. Credit: NASA.

With the recent success of the MESSENGER probe in reaching Mercury orbit, it’s worth pointing out that another mission design from the Johns Hopkins University Applied Physics Laboratory (JHU/APL) would create a spacecraft even faster than the Helios probes. Like Helios, the Solar Probe Plus is headed for the Sun, with a goal of studying the outer corona. In its approach to within 8.5 solar radii (that’s just 0.04 AU), Solar Probe Plus would achieve a velocity of close to 200 km/sec, three times faster than Helios II. In interstellar terms, that works out to 6450 years to reach Centauri A and B, better than Voyager 1 but a numbingly long voyage even for a generation ship. Thus the difference between where we are now and where we would like to be.

New Horizons just passed the orbit of Uranus on March 18, described by an update on the mission site as “the fastest spacecraft ever launched.” And in a sense, that’s also true — New Horizons left Earth orbit traveling faster than any previous vehicle launched into interplanetary space. But the expected speed at Pluto/Charon encounter is about 14 kilometers per second, and it’s unlikely that any conceivable gravitational assist in the outer system could boost its speed to surpass Voyager 1’s. In any case, a recent tweet from the New Horizons team says there will be no Pluto gravity assist because it would impinge upon the scientific investigation of Pluto and its moons.

The good news, though, is that New Horizons should have enough fuel after Pluto encounter for one or even two Kuiper Belt Object flybys, targets that will not be selected until 2015. We thus keep our eyes on the coming flyby in the outer Solar System, with every indication that all is well aboard the spacecraft. A successful New Horizons should highlight yet another JHU/APL initiative, the Innovative Interstellar Explorer, a design intended to push out to 200 AU. Slowly, but with ever increasing steps, we’re learning our way around this Solar System and sketching out the regions beyond it. The propulsion challenges ahead are clearly defined, and energizing.