Vesta: Closing on a Protoplanet

As the Dawn spacecraft continues on its way to Vesta, which it will reach in July, mission controllers have been putting it through its paces with a series of maneuvers that test the vehicle’s capabilities, a rehearsal for the high- and low-altitude mapping orbits it will operate in. It’s interesting to consider Dawn’s ion thrusters, which after more than 2.2 years of powered flight, continue to work flawlessly, now with a bit less than half of the original supply of xenon propellant (the spacecraft started with 425 kilograms of xenon). The velocity change in this period has been 5.7 kilometers per second, marking a record for on-board propulsion systems.

Dawn’s approach to Vesta is slow and spiraling, closing in on the asteroid at 0.7 kilometers per second as the orbital paths of target and spacecraft become more and more similar. In this mission report, chief engineer Marc Rayman (JPL) describes the trajectory, which is made possible by the high fuel efficiency of the ion propulsion system and the long periods of thrusting:

Designing the spiral trajectories is a complex and sophisticated process. It is not sufficient simply to turn the thrust on and expect to arrive at the desired destination, any more than it is sufficient to press the accelerator pedal on your car and expect to reach your goal. You have to steer carefully (and if you don’t, please don’t drive near me), and so does Dawn. As the ship revolves around Vesta in the giant asteroid’s gravitational grip, it has to change the pointing of the xenon beam constantly to stay on precisely the desired winding route to the intended science orbits. 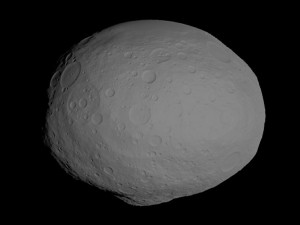 Interestingly, Rayman says that from Dawn’s perspective, Vesta is already the brightest object in the sky other than the Sun, about as bright as Jupiter appears to us in the evening skies on Earth. I keep calling Vesta an asteroid but the differences between it and other main belt asteroids are profound. Vesta is about 530 kilometers across, compared to the much smaller objects that travel with it in their orbits between Mars and Jupiter. Moreover, Vesta has undergone differentiation, meaning its structure is layered, showing a core, mantle and crust.

Image: This image shows a model of the protoplanet Vesta, using scientists’ best guess to date of what the surface of the protoplanet might look like. It was created as part of an exercise for NASA’s Dawn mission involving mission planners at NASA’s Jet Propulsion Laboratory and science team members at the Planetary Science Institute in Tuscon, Ariz. The images incorporate the best data on dimples and bulges of the protoplanet Vesta from ground-based telescopes and NASA’s Hubble Space Telescope. The cratering and small-scale surface variations are computer-generated, based on the patterns seen on the Earth’s moon, an inner solar system object with a surface appearance that may be similar to Vesta. Credit: NASA/JPL-Caltech/UCLA/PSI.

It was back in 1972 that Tom McCord (now at the Bear Fight Institute, WA) and colleagues discovered the signature of basalt on Vesta, an indicator that the object had melted at some time in the past. We now believe that Vesta had enough radioactive material inside when it coalesced that rock could melt and the lighter layers could float to the outside, a process we normally think of in planetary rather than asteroid terms. That makes Vesta interesting as a ‘protoplanet,’ a dense, layered body that never fully developed by merging with other objects of the same category.

Vesta is, in other words, a window into the remote past, one we can study by looking at the hundreds of meteorites that make up some of Vesta’s debris following ancient collisions with space rocks, and now by orbiting the distant object itself. Dawn principal investigator Christopher Russell (UCLA) describes Vesta’s significance:

“This gritty little protoplanet has survived bombardment in the asteroid belt for over 4.5 billion years, making its surface possibly the oldest planetary surface in the solar system. Studying Vesta will enable us to write a much better history of the solar system’s turbulent youth.”

We’ll have a year at Vesta to study these matters, with Dawn arriving in July at a time when the south pole will be in full sunlight and the huge crater at the pole will be completely visible. Vesta’s evolution may be put on display if we get a good enough view of the layered materials inside the crater. In any case, Dawn will be able to give us high-resolution data on the asteroid’s surface composition, topography and texture as we probe its internal and external features. More on Vesta as protoplanet in this JPL news release.