If you’re trying to get actual images of exoplanets, it helps to look at M-dwarfs, particularly young ones. These stars, from a class that makes up perhaps 75 percent of all the stars in the galaxy, are low in mass and much dimmer than their heavier cousins, meaning the contrast between the star’s light and that of orbiting planets is sharply reduced. Young M-dwarfs are particularly helpful, especially when they are close to Earth, because their planets will have formed recently, making them warmer and brighter than planets in older systems. 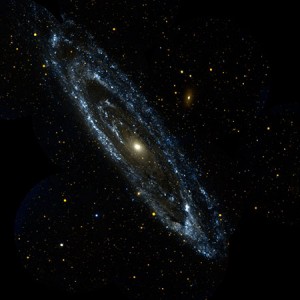 The trick, then, is to identify young M-dwarfs, and it’s not always easy. Such a star produces a higher proportion of X-rays and ultraviolet light than older stars, but even X-ray surveys have found it difficult to detect the less energetic M-dwarfs, and in any case, X-ray surveys have studied only a small portion of the sky. Astronomers at UCLA now have hopes of using a comparative approach, working with the Galaxy Evolution Explorer satellite, which has scanned a large part of the sky in ultraviolet light. These data are compared to optical and infrared observations to identify young stars that fit the bill for possible exoplanet detection.

So far the results are good. Of the 24 candidates identified with these methods, 17 turn out to show signs of stellar immaturity. The stars may be too young and low in mass to show up in X-ray surveys, but the Galaxy Evolution Explorer data seem effective at finding M-dwarfs less than 100 million years old. We can hope to add, then, to the tiny number of exoplanets that have been directly imaged, a useful adjunct to existing observing methods. Direct imaging can help us with large planets in the outer reaches of their solar systems, planets that would thus far have eluded Doppler methods. That helps us flesh out our view of complete planetary systems.

And yes, WISE (Wide-field Infrared Survey Explorer) is in the hunt here as well, helping us identify candidates from the M-dwarf category that would make good imaging targets. WISE can find young, nearby stars that are still surrounded by planetary debris disks, a fertile hunting ground for new planetary imaging. Putting the tools together across the spectrum should make it possible to find close young planets whose properties should help us in our studies of solar system formation. And we can expect release of the first 105 days of WISE data later this month.

As to the Galaxy Evolution Explorer, it was launched back in 2003 with a mission to observe distant galaxies in ultraviolet light. Now operating in extended mission mode, GALEX has been conducting an ultraviolet all-sky survey intended to produce a map of galaxies in formation, helping us see how our own galaxy evolved. Turning its ultraviolet capabilities to the study of exoplanets in young solar systems gives us a new technique for finding imaging targets.