New Debate over Volcanoes on Titan

Back in December, scientists from the Cassini team presented evidence for ice volcanoes on Titan, looking at a region called Sotra Facula, which bears some resemblance to volcanoes on Earth like Mt. Etna in Italy and Laki in Iceland. An ice volcano, also known as a cryovolcano, would draw on geological activity beneath the surface that warms and melts parts of the interior and sends icy materials through a surface opening. Sotra Facula’s two 1000-meter peaks combine what appear to be deep volcanic craters with finger-like flows of material, a kind of surface sculpting that could explain some of the processes occurring on other ice-rich moons.

But work like this is part of an ongoing dialogue testing various hypotheses, and the latest round takes us in a sharply different direction. In a new paper in Icarus, Jeff Moore (NASA Ames) and Robert Pappalardo (JPL) argue that Titan is in fact much less geologically active than some have thought. A cool and dormant interior would be incapable of producing active ice volcanoes:

“It would be fantastic to find strong evidence that clearly shows Titan has an internal heat source that causes ice volcanoes and lava flows to form,” adds Moore. “But we find that the evidence presented to date is unconvincing, and recent studies of Titan’s interior conducted by geophysicists and gravity experts also weaken the possibility of volcanoes there.”

The new work looks at Titan in light of what we see on Callisto, which Moore sees as analogous to Titan ‘if Callisto had weather.’ And indeed, the two moons are roughly the same size, with Callisto’s cratered surface solely the result of impact events rather than internal heating. In the new paper, Moore and Pappalardo see Titan’s surface as explicable entirely from external processes like wind, rain and impacts. These we see in profusion — lakes of liquid methane and ethane, valleys carved by rivers, craters — through infrared and radar instrumentation, but the debate now moves to whether all surface features can be explained in the same way. 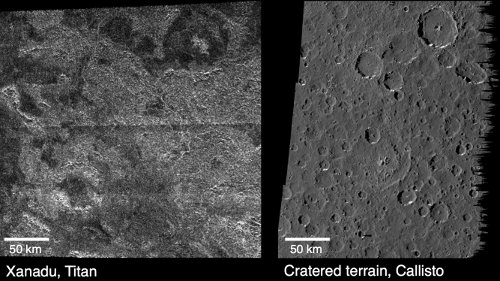 Image: These images compare surface features observed by NASA’s Cassini spacecraft at the Xanadu region on Saturn’s moon Titan (left), and features observed by NASA’s Galileo spacecraft on Jupiter’s cratered moon Callisto (right). The Cassini radar image, obtained on a Titan flyby April 30, 2006, is centered on 10 degrees south latitude and 85 degrees west longitude. The Galileo camera image, obtained on June 25, 1997, is centered on 6 degrees south latitude and 7 degrees west longitude. Titan may originally have had a cratered landscape similar to Callisto that has since been eroded by rainfall and runoff. There are many large circular features in Titan’s Xanadu region that have some of the characteristics of impact craters — such as central peaks and inward-facing circular cliffs — which make scientists think they are, in fact, eroded impact craters. Credit: NASA/JPL.

Titan’s atmosphere may remain the focus of debate between those who believe the moon is geologically dormant and the ice volcano theorists. The atmosphere is primarily nitrogen, with a few percent methane, and the Sotra Facula analysis, presented at the American Geophysical Union meeting in San Francisco last December, focused partially on that mix. Thus Linda Spilker (JPL):

“Cryovolcanoes help explain the geological forces sculpting some of these exotic places in our solar system. At Titan, for instance, they explain how methane can be continually replenished in the atmosphere when the sun is constantly breaking that molecule down.”

But are ice volcanoes the only explanation for replenished methane in this atmosphere? Both sides in the debate would agree that there is no evidence of current activity at Sotra Facula even if the topography there is suggestive of a volcanic origin. Further Cassini studies will advance the argument, but it’s helpful that Pappalardo and Moore have injected what they call ‘a necessary level of caution into the discussion’ as we wait for more definitive results.