Beyond the Red Edge

If you study ‘earthshine,’ the light of our planet reflected off the unlit part of the Moon, you can discover much about how life leaves an imprint upon a spectrum. It’s a useful exercise because one of these days we’ll have the tools in place to be examining the spectrum of a terrestrial world around another star. In Earth’s case, what two different teams have found is that water vapor, oxygen and ozone can be traced, just the kind of biosignatures we’d hope to find on a terrestrial world elsewhere.

Careful study of the spectrum of earthshine also turns up a tentative detection of the so-called ‘red edge’ signature of chlorophyll. What’s happening is that plants on our planet absorb visible light as part of the process of converting sunlight into energy. Beyond about 0.7 microns, just a bit longer in wavelength than the frequencies we can see, the same plants become highly reflective. This increase in reflectivity shows up as a sharp rise in the red part of the spectrum, hence the ‘red edge.’

The Uses of ‘Earthshine’

Ray Jayawardhana talks about this in his new book Strange New Worlds (Princeton, 2011), noting how useful such reflectivity is even now:

…Earth-observing satellites like Landsat use [the red edge] to map changes of the forest cover in the Amazon, for example, by taking images in two bands that fall on either side of the red edge. In the hemisphere-averaged spectrum of Earthshine, the red-edge signature is diluted by those vast areas on the planet either devoid of vegetation (e.g. oceans, deserts) or hidden beneath clouds, making it tougher to detect.

And this is important for our future observing plans:

Giovanna Tinetti of University College London has estimated that at least 20 percent of a planet’s surface must be covered by plants and free from clouds for the vegetation’s imprint to show up in the global spectrum.

None of this is easy, of course, because earthshine gets mixed up with the spectra of both the Moon and the Sun, but careful subtraction of light from the lunar crescent makes it possible to isolate the Earth’s spectrum. The earthshine spectrum rises toward the blue, Jayawardhana notes, because molecules in the Earth’s atmosphere scatter blue light more efficiently than red light.

The Colors of Life

We know how significant photosynthesis is for sustaining life on Earth, and it’s not unreasonable to think that some kind of light-processing pigments like chlorophyll would be present on other planets. We can add, then, the spectral signature of such pigments to the other biosignatures of note, because the more such signatures we find on a given world, the greater the chances we’re looking at life and not some other process at work.

It’s interesting to ponder what color pigments would dominate on worlds circling different kinds of stars than our Sun. I see the question is being discussed at the Royal Astronomical Society’s National Astronomy Meeting in Llandudno, Wales through the work of Jack O’Malley-James (University of St. Andrews). O’Malley-James is asking how the light of multiple star systems would affect the life evolving on the planets around them, and specifically, what plants might be like on an Earth-like planet with more than a single sun in the sky.

The results thus far: Life may have adapted to use the combined light of all the suns, but it’s also possible that some forms of life may develop using the light from only one of the suns. Plants might, then, develop differently depending on the color of the starlight they use. Says O’Malley James:

“Our simulations suggest that planets in multi-star systems may host exotic forms of the more familiar plants we see on Earth. Plants with dim red dwarf suns, for example, may appear black to our eyes, absorbing across the entire visible wavelength range in order to use as much of the available light as possible. They may also be able to use infrared or ultraviolet radiation to drive photosynthesis. For planets orbiting two stars like our own, harmful radiation from intense solar flares could lead to plants that develop their own UV-blocking sun-screens, or photosynthesizing microorganisms that can move in response to a sudden flare.”

The combinations would be endless, given the apparent multitudes of planets in our galaxy and the fact that 50 percent of red dwarfs, and 25 percent of G-class stars, are thought to occur in multiple systems. We then have to factor in the configuration of planetary orbits, which might circle two closely spaced stars or orbit one of two more widely separated stars. If life really is widespread, then foliage on such worlds should come in a profusion of different colors. 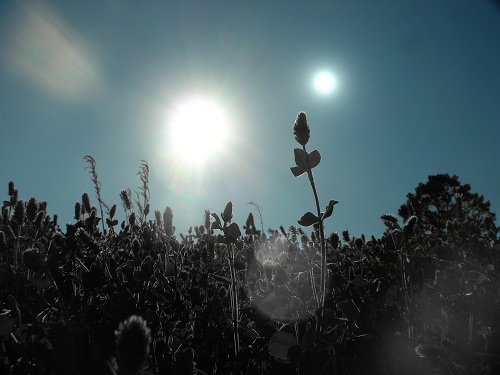 Nancy Kiang (NASA Goddard Institute for Space Studies) has also been studying the spectral signature of photosynthesis, noting how the color of the pigments varies depending on the spectral type of the host star. Planets circling F-class stars, for example, would probably have plant pigments that absorb primarily in the blue, with the result that these plants would appear red or orange to our eyes. Work with the spectrum of an F-class star’s terrestrial planet and you might find a ‘blue edge’ rather than a red one.

The red dwarf scenario is as O’Malley-James describes. Most of the photons reaching the surface here are in the near-infrared. Plant pigments would have adapted to use the full range of visible and infrared light, while reflecting little back, hence their black appearance. But Kiang notes the difficulty in getting photosynthetic organisms to evolve in such settings, given the UV flares often produced by young M-dwarfs.

In fact, Kiang’s team has estimated that early microbes would need to be as much as nine meters under water to escape the effects of such flares while still receiving the needed light for photosynthesis. Here I want to quote Ray Jayawardhana again, on how this scenario parallels the early Earth, when the atmosphere lacked oxygen and ozone:

The first photosynthetic organisms lived under water, which acted as a solvent for biochemical reactions and provided protection from UV rays in the absence of the ozone layer. These bacteria had to use infrared light, filtered through the ocean, so their pigments had to be different too. Later, as oxygen and ozone levels built up, green algae emerged, first in shallow water and eventually on land. Their plant descendants have adapted to the atmosphere’s changing composition, itself primarily the result of photosynthesis. Chlorophyll is customized for present-day conditions on Earth.

Find the right absorption band in the spectrum of a distant exoplanet and you just might be looking, then, at the signature of alien plant life. Work like O’Malley-James’ and Kiang’s can help us understand where in the spectrum to look, taking into account the different kind of stars we’ll be finding planets around, and the multiple systems in which many of them will orbit. The further trick will be to demonstrate that the signatures we do detect do not have other possible explanations, a challenge astrobiology continues to address. For more on the colors of exobiology, see this earlier Centauri Dreams post.