Last week we looked at the possibility of using a planet’s aurora as an exoplanet detection tool, speculating that the LOFAR radio telescope in Europe might be able to detect such an emission, and I reminisced about listening for emissions from Jupiter on an old shortwave receiver. Jonathan Nichols’ work at the University of Leicester makes the case for exoplanet detections, and recent news from analysis of Cassini data indicates that planetary aurorae can do more than just flag the presence of a planet. In some cases, they can provide information about that planet’s moons, as in the case of Saturn, where careful analysis may offer us new insights into Enceladus.

For it turns out that the electrical connection between Saturn and Enceladus is rather robust. Moreover, it was a connection that scientists had anticipated, given that in the Jovian system, Io creates a glowing auroral footprint near Jupiter’s north and south poles. Why not expect something similar in the case of Enceladus, even if it’s 240,000 kilometers from Saturn? Even so, the search for an auroral footprint had come up dry until new analysis of Cassini data collected in 2008. Now we have images and audio highlighting the interactions between planet and moon. First the audio:

The eerie sounds accompanying the above video (credit: NASA/JPL) are the result of electrons moving along the magnetic field lines between a glowing region of ultraviolet light on Saturn, and Enceladus. The sound has been amplified to make it audible to the human ear. Look below, where you’ll see that an auroral ‘patch’ appears at the end of the magnetic field line connecting planet and moon, near Saturn’s north pole, where energetic electrons plunge into Saturn’s atmosphere. The region measures 1200 by 400 kilometers, and it’s a faint catch, far less bright than the planet’s polar auroral rings. 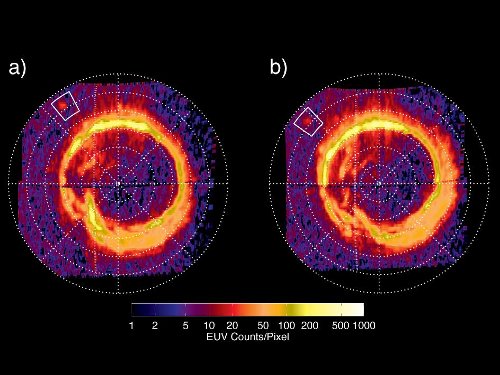 Image: The two images shown here were obtained by Cassini’s ultraviolet imaging spectrograph on Aug. 26, 2008, separated by 80 minutes. The footprint moved according to changes in the position of Enceladus. In the image, the colors represent how bright the extreme ultraviolet emissions are. The lowest emission areas (one to two extreme ultraviolet counts per pixel) are in black/blue. The brightest emission areas (500 to 1,000 extreme ultraviolet counts per pixel) are in yellow/white. The footprint appeared at about 65 degrees north latitude. It measured about 1,200 kilometers (750 miles) in the longitude direction and less than 400 kilometers (250 miles) in latitude, covering an area comparable to that of California or Sweden. Credit: NASA/JPL/University of Colorado/Central Arizona College.

The discovery of a beam of energetic protons near Enceladus, aligned with the magnetic field, goes back to 2008, and further work in 2009 detected the hissing sound of the magnetic connection. Where this gets truly ingenious is in the way these data can be used to ferret out information about Enceladus itself. Because the moon is active, with jets that spray water vapor and organic particles into space, the water cloud above its jets produces an ionized plasma cloud as it interacts with the magnetic field around Saturn. The magnetic field lines are disturbed by this interaction in a way that suggests the geyser discharges from Enceladus are variable.

Abigal Rymer (JHU/APL) is one of the lead authors of the paper on this work:

“The new data are adding fuel to the fire of some long-standing debates about this active little moon. Scientists have been wondering whether the venting rate is variable, and these new data suggest that it is.”

Thus we learn more about the complex interactions between a planet and its moons, information that may one day help us untangle the extremely faint auroral signatures we pick up from exoplanetary systems. The paper is Pryor et al., “The auroral footprint of Enceladus on Saturn,” Nature 472 (21 April 2011), pp. 331–333 (abstract).